This edition of Muggle Matrimony takes a look at James and Katy, who first met in the workplace. Katy was introduced to the series by her brother and immediately knew she would be joining the mass queues for all future midnight releases. James, however, as is the case with many grooms we feature, faced not only pursuing Katy romantically but also accepting her Potter obsession. As it would turn out, he made the right decision.

James proposed during the couple’s second trip to the Leavesden Studio Tour. Shortly after arriving at the Hogwarts Castle, he pulled out a Sorting Hat and asked Katy to try it on. After snapping a few pictures, James then produced a ring and popped the question. They immediately proceeded to the gift shop for celebratory mementos.

Naturally, when it came to planning their wedding, James and Katy opted for one that would incorporate their love for the novels. The couple decided to manufacture most of the decorative elements themselves, which included acceptance letter invitations, chocolate frogs, and Ollivander-style packaging for pre-made wands scooped up from Etsy.

On tweaking the appearance of the venue itself, Katy was determined to strike the right balance between tasteful and paying homage to the series. To do this. she amped up aesthetics that would already be present at a typical wedding and updated them to match the color and symbolic themes from the books. “Here Comes the Bride” was replaced with “Hedwig’s Theme.” Seating arrangements were divvied up into Hogwarts houses. Wands accompanied place settings. The sumptuous Honeydukes buffet featured edible Dark Marks, Fizzing Whizbees, and Cockroach Clusters. There was even a giant chessboard stationed on the grounds that curiously had a few pieces missing, which made it all the better for guests who assumed roles in their very own Wizard’s Chess adventure.

Perhaps the most memorable item was James’s one-of-a kind Wizard’s Monopoly board game. Hearing Katie’s remarks about the absence of such a piece of merchandise, he painstakingly crafted this incredible Potter DIY memorabilia, which was then hidden in a pre-wedding scavenger hunt for Katy. Also scattered throughout the hunt were the custom-made property cards, pewter playing figures, a rule book, cottages, and castles.

The wedding, though, was not without a hitch. A disappointing order of Snitch cake pops forced James and his groomsmen to put on their chef hats the day before the wedding. In an attempt to salvage the desserts, they left Katy’s parents’ kitchen littered with abandoned chocolate balls, gold spray, and discarded wings.

That aside, when the big day arrived, according the Katy, it was just magical:

When the time came, I walked down the aisle to ‘Hedwig’s Theme’ and couldn’t stop smiling. Seeing James waiting there for me was the best moment. We had a surprise guest bringing in our wedding rings, a beautiful barn owl called Darcy. It was terribly hot in that room, and she didn’t have much fun flying, but we got the rings in the end! We all posed with Darcy and Hera for some lovely unique pictures afterward.

We got a chance to ask James and Katy a few questions in their Q&A. Enjoy!

Q&A with James and Katy

Q: Apart from your wedding, what is your fondest memory of the series?
Katy: My fondest memory was going to the Leavesden Studio Tour for the first time. My family and I went on the first tour on the first day it opened. It was so exciting! I spent extortionate amounts in the gift shop and now visit every March. James: The Harry Potter series always brings back memories of my family to me. I grew up with the series, enjoying the books and films with my brothers, sisters, and parents, listening to the audiobooks while on holidays, [and] discussing the immensely detailed world and the potential plot twists between each books. Even now, years later, I always recall days gone by when I reread the series.

Q: Did you have to explain the theme to most of your guests?
James & Katy: Most had an idea of what it was. We sent acceptance letters out as our invites, so they could certainly guess what the wedding was going to be like. Everyone said we’d done a good job bringing in the Harry Potter elements in a way that wasn’t too overwhelming.

Q: How on earth were you able to construct such an intricate Wizards Monopoly?
James: I was looking for a unique wedding present for my future wife and the idea came to me while deciding on what I could make by using some props from an existing Harry Potter board game. The idea grew from there. After some online research, I found some other well-made versions on the web but decided to create my own. I found usable original monopoly PDF files for the board and money, which I adapted and enhanced with images and logos from the franchise. Some property images were more difficult to produce than others; some even required me to screenshot a scene from the films and then silhouette them with Photoshop. I edited the original cards to encorpate Harry Potter situations and calamities, wrote a themed instruction sheet, and added an optional “magical” dice to the game with its own rules. I found the pieces from other board games: the cottages and castles came Disney Monopoly and the player tokens came from past Harry Potter: Scene It games. After several months of secret work on the files, I found a company to print everything, which I then cut and stuck onto a standard Monoply box and board, all in time for an owl to deliver it to my future wife the night before the wedding.

Q: How did Darcy [barn owl] behave for the duration?
James & Katy: She was great! Though she certainly did not enjoy how hot it was in the ceremony room and was rather reluctant to fly with our wedding rings, but she was delightful afterwards. All our guests had lovely pictures done with her and Hera, and it was a great addition to the day.

Q: What were some of your favorite Potter elements incorporated into the day?
Katy: I loved our seating chart – we had a friend draw it by hand and she did a spectacular job. The table decorations I thought looked fab – I spent ages designing them and was really happy with how they turned out. And of course the Honeydukes sweet buffet! That went down very well with everyone.

James: I especially enjoyed the little details the venue and suppliers helped us with: a Whomping Willow fingerprint tree (with stag and doe in picture), the four founders cocktails, and the giant chess set in the garden among others.

Q: If you could invite any two characters from the series to attend the wedding, who would they be and why?
Katy: I would invite Hagrid and Fred. Hagrid would have been able to get the owls flying and bring other amazing creatures. Fred would have added some more humor to the day and hopefully provide some amazing fireworks for the evening.

James: I would have loved to have seen Tonks at the wedding, to see her infamous nose transformations delighting her table. Also, it would have been interesting to see if George’s card tricks could rival our non-wand-carrying magician.

Q: What magical item from the series would you have loved to receive as a wedding present?
Katy: I would love the Pensieve! Being able to relive all my favorite memories of the wedding, honeymoon, and my best moments in general would be amazing.

James: I have always wanted a Time-Turner. Who hasn’t expressed there’s not enough hours in the day? It could solve so many household issues and give you more time to do the things that matter properly.

Q: Lastly, what is the best piece of advice you can give future couples who may want to throw a Potter wedding?
James & Katy: Allocate enough time to do everything! We were lucky with a couple of bits as we didn’t plan completely accurately and had a couple of last-minute rushes. Also, don’t panic if anything goes wrong. We were meant to have Golden Snitches flying around our wedding cake, but sadly this fell through. It was disappointing at first, but resulted in a hilarious effort of James and his best man attempting to recreate them. This attempt did not produce anything cake-worthy! But they were yummy. 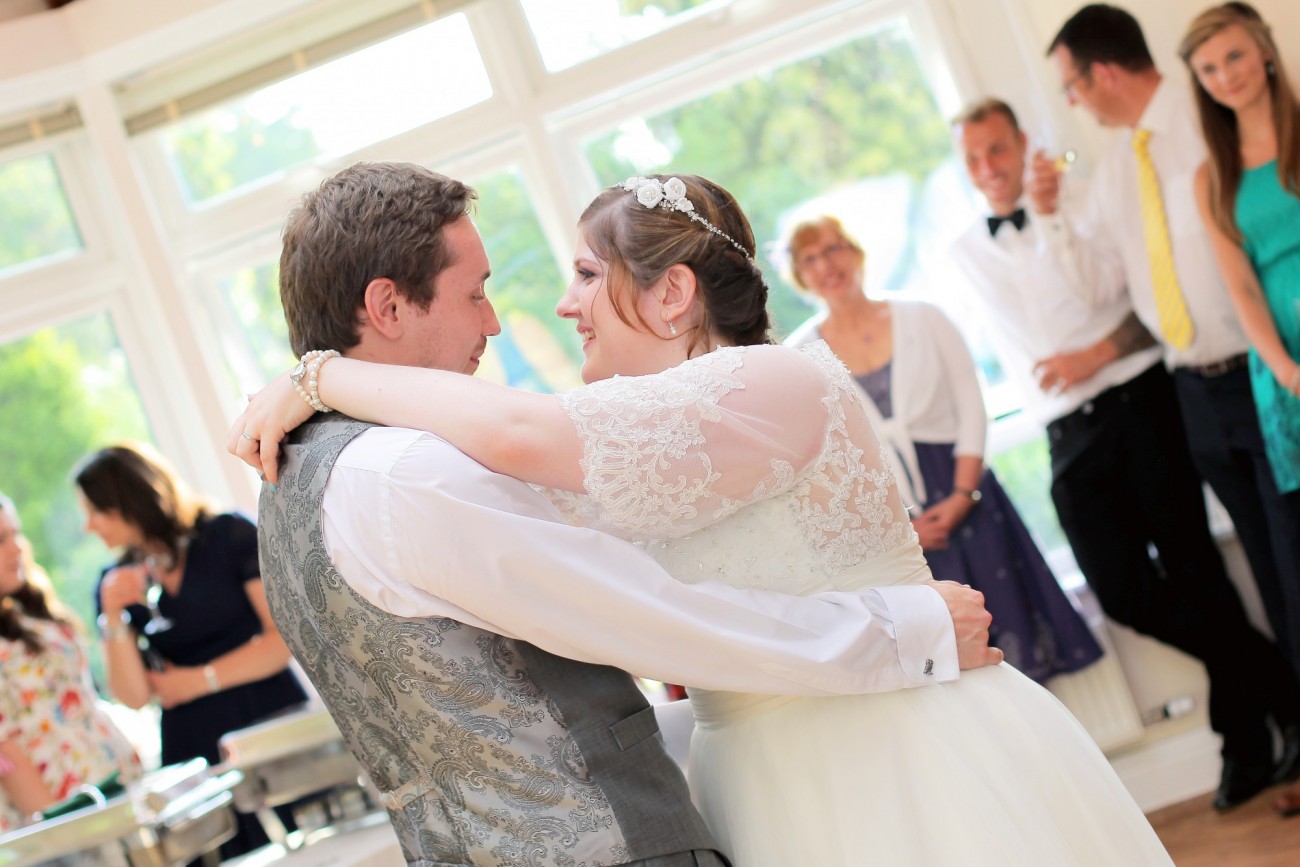 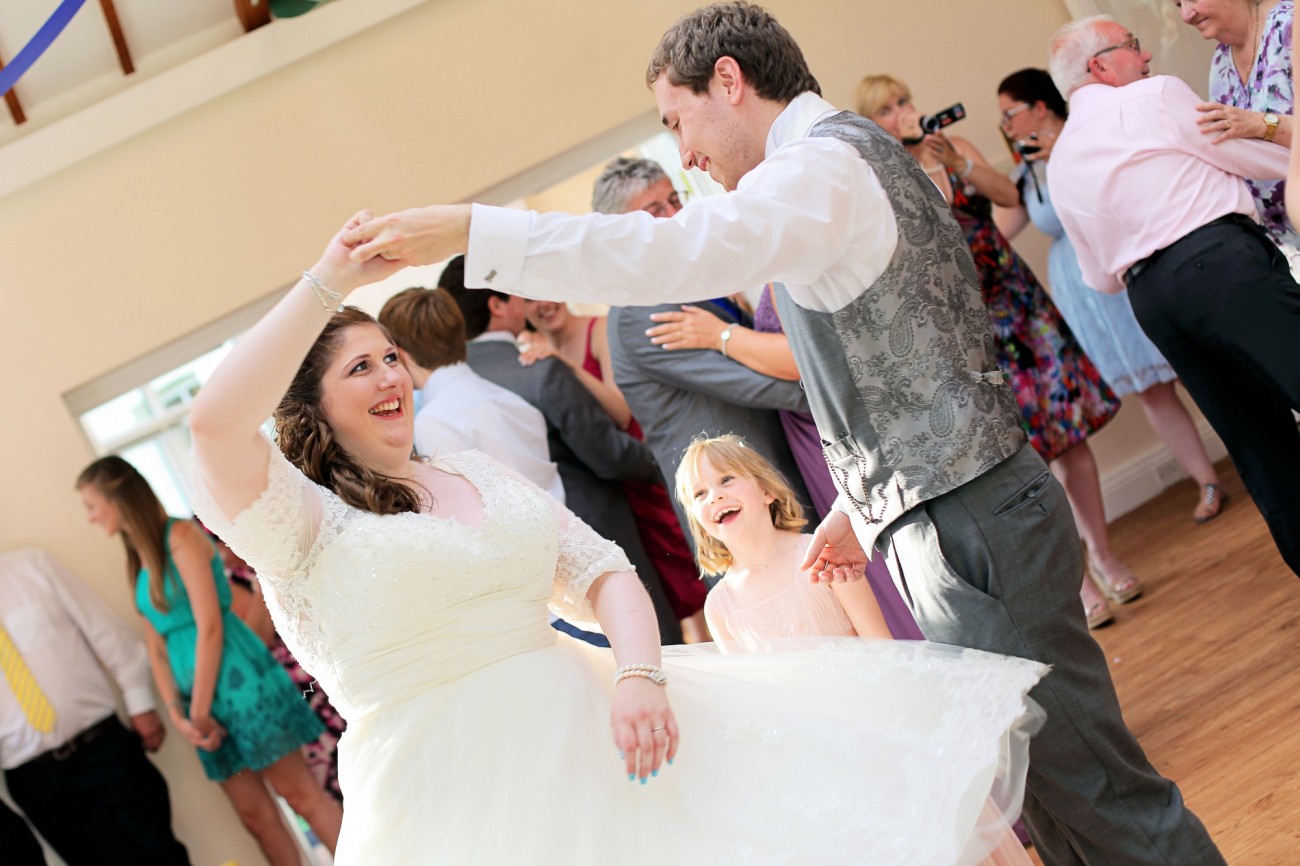 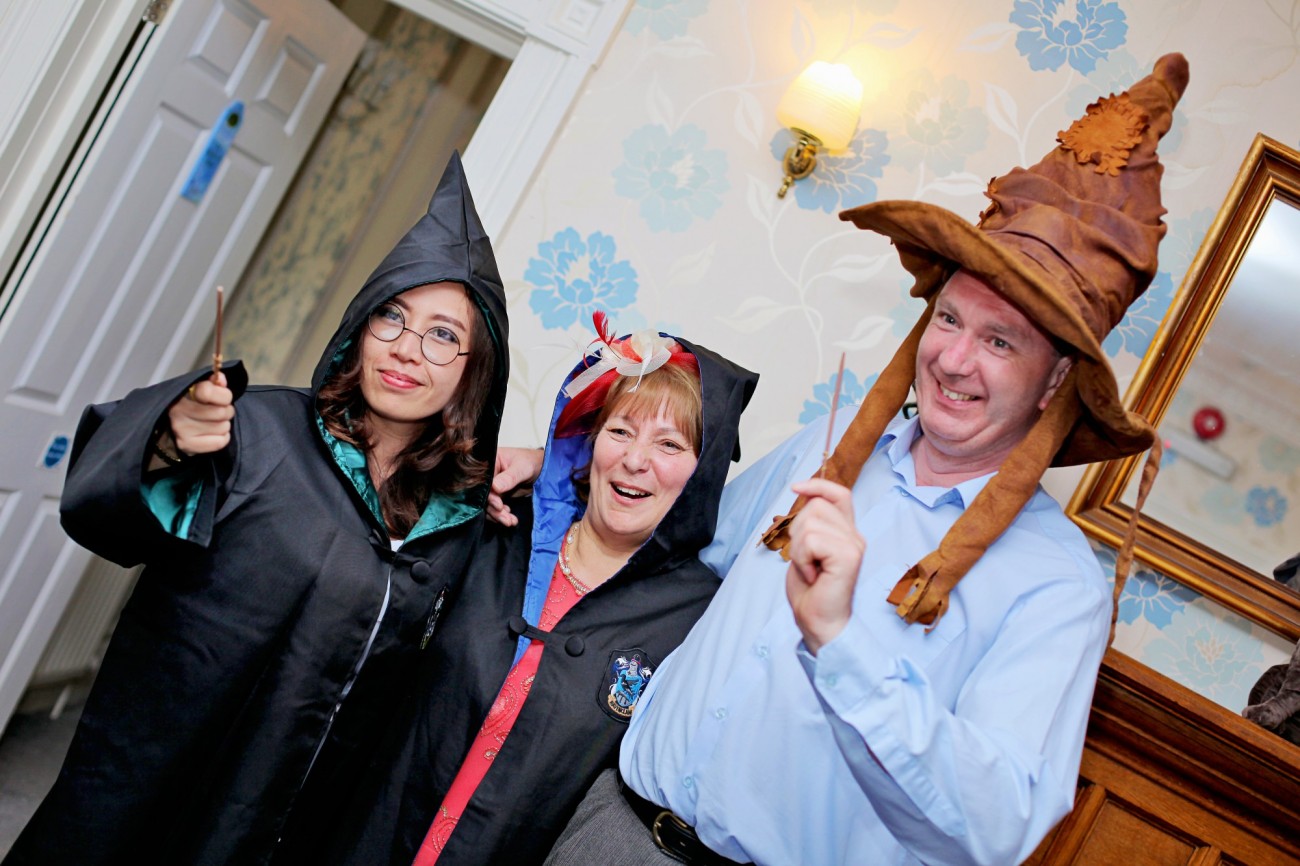 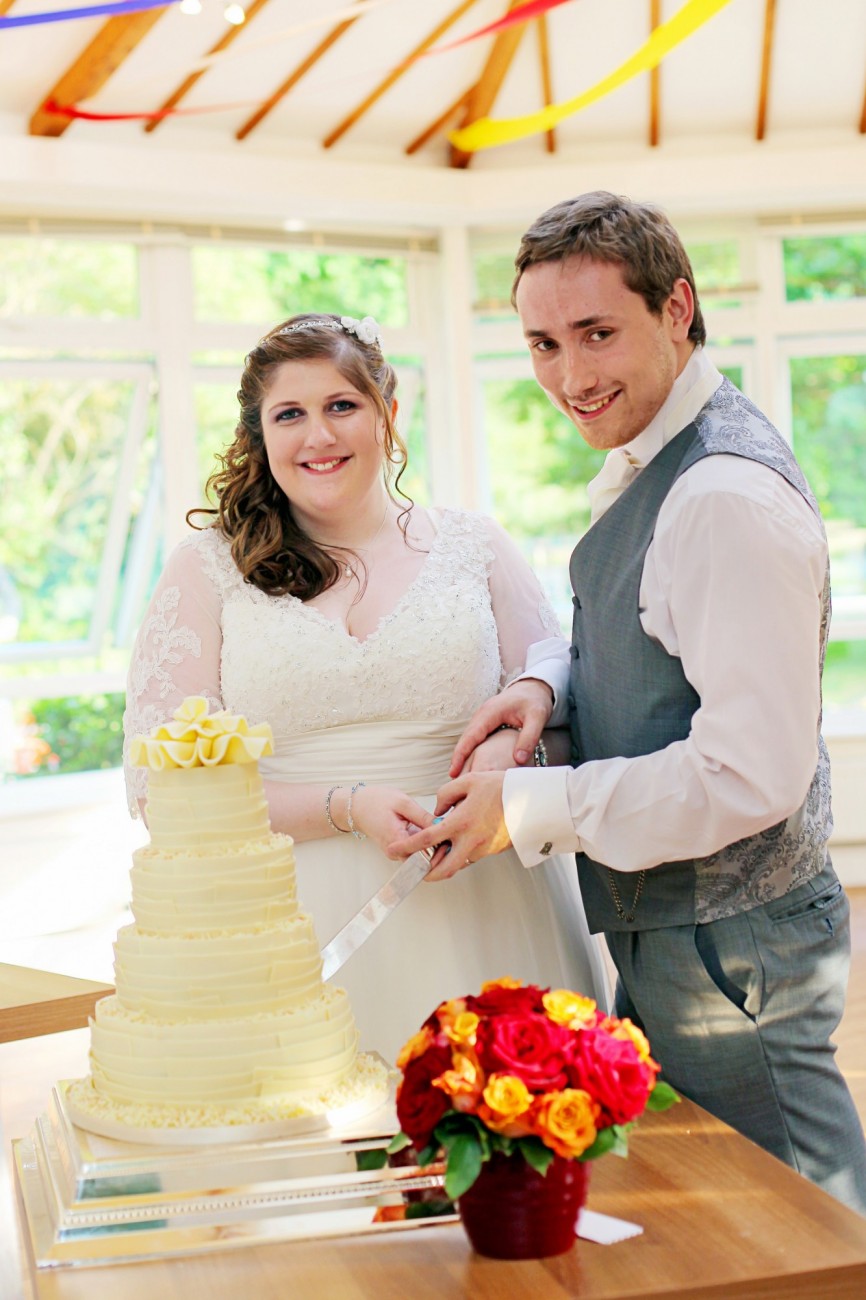 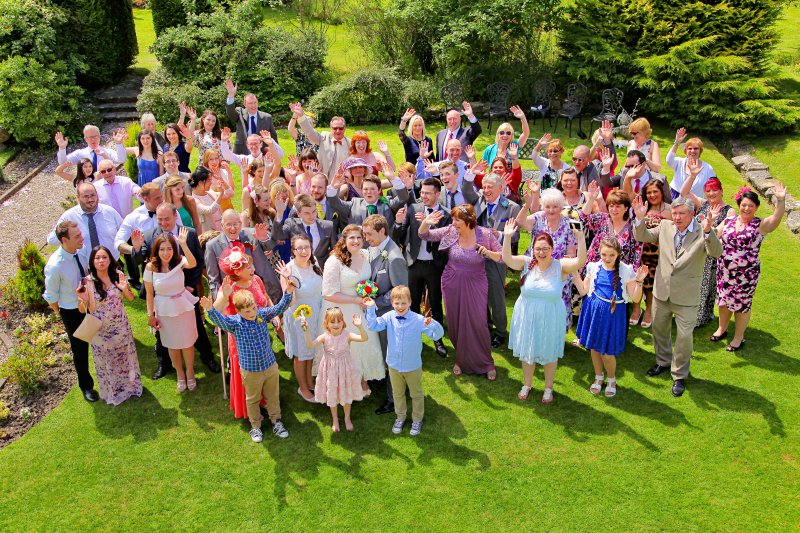 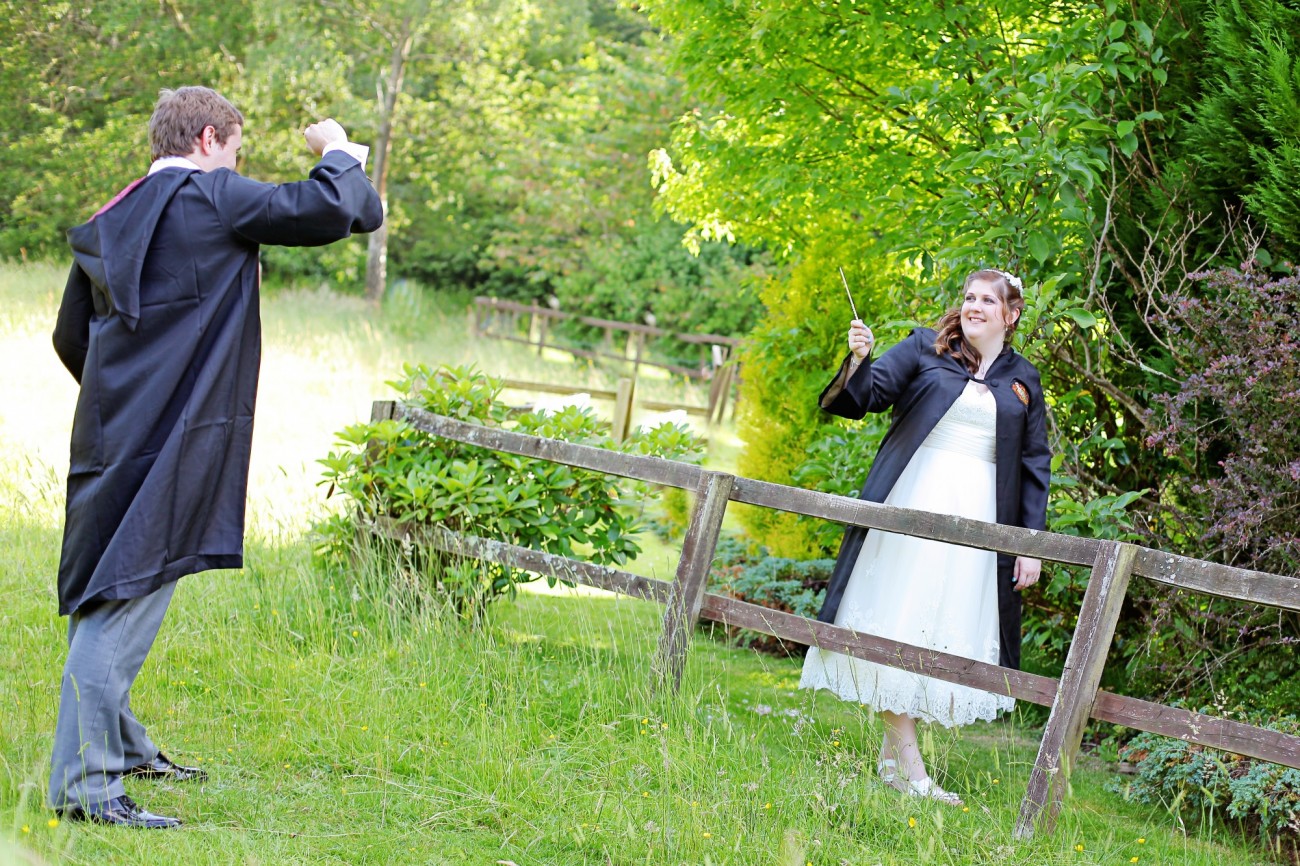 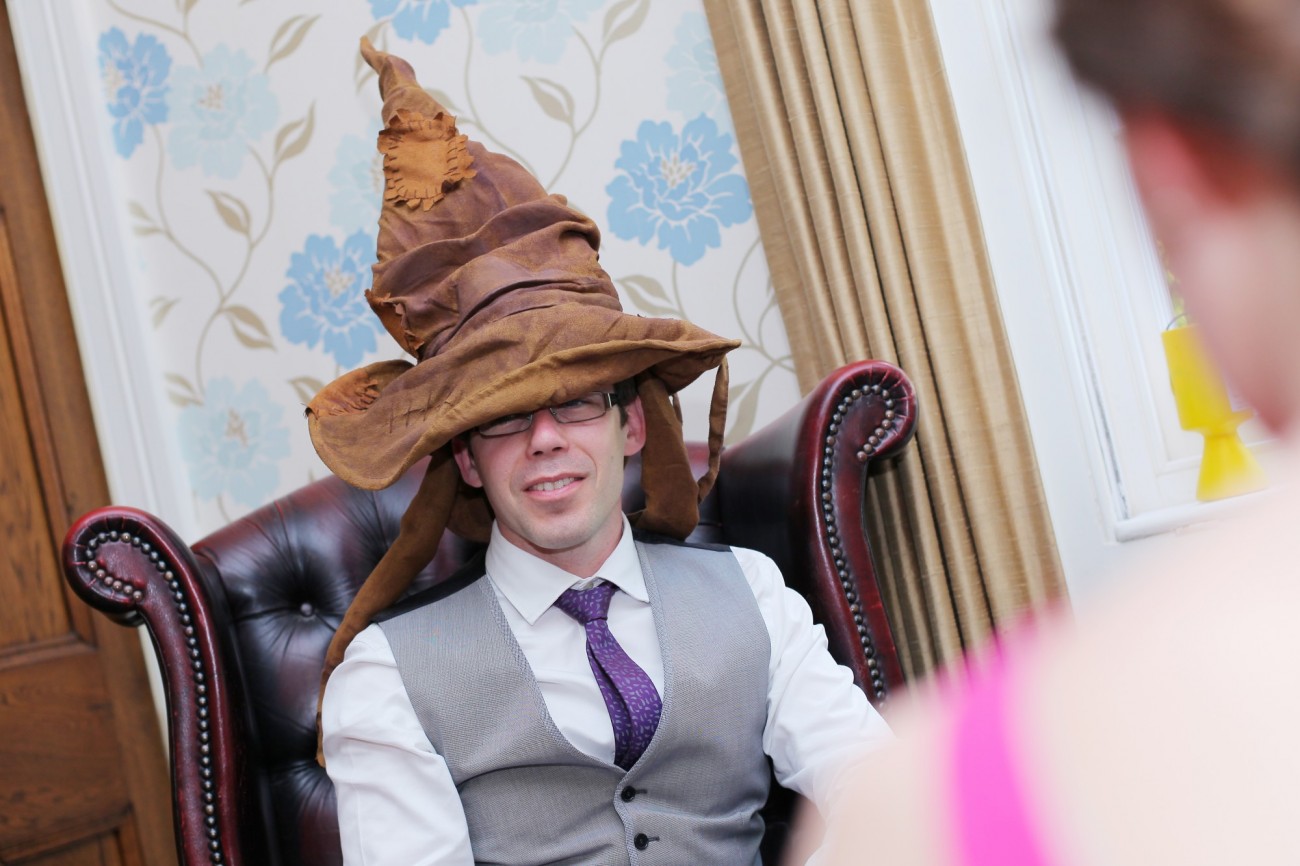 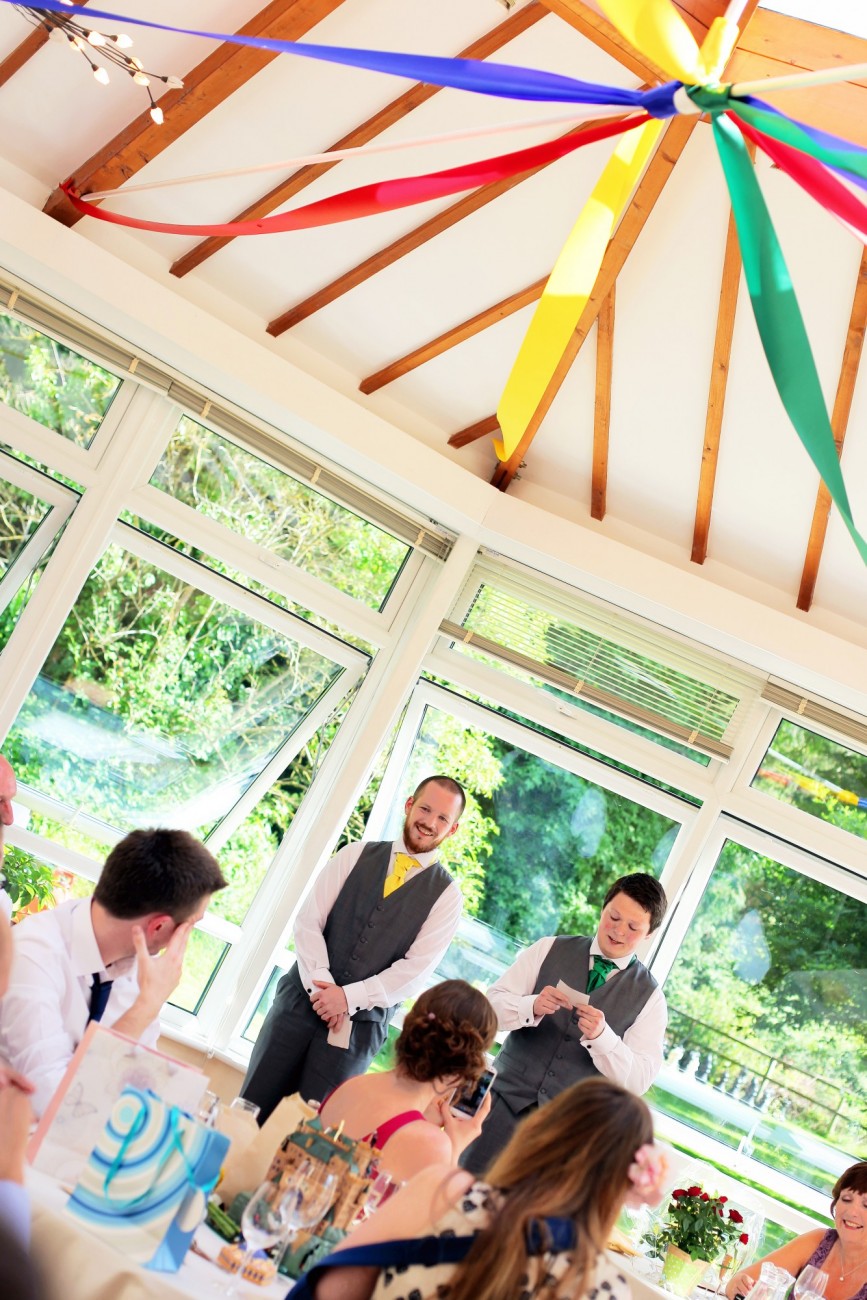 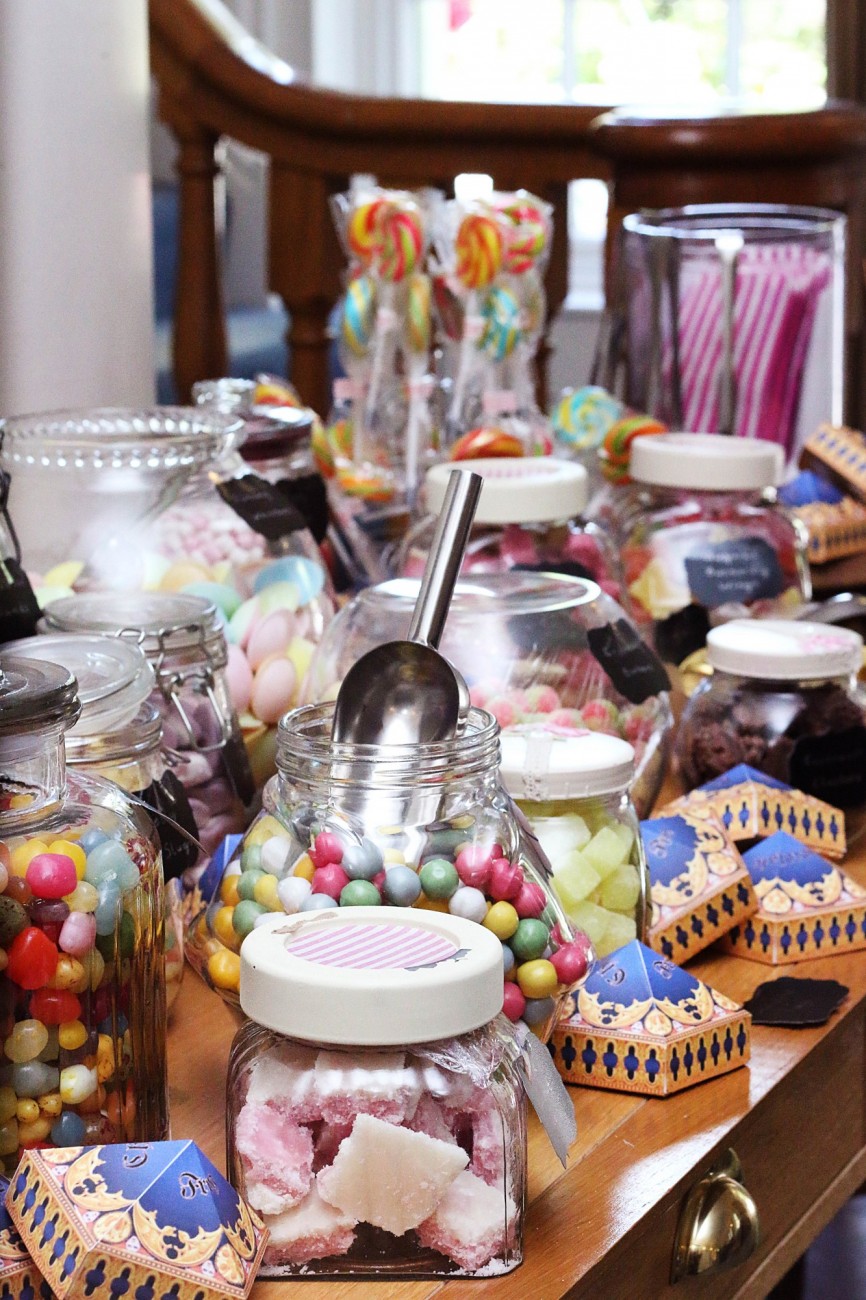 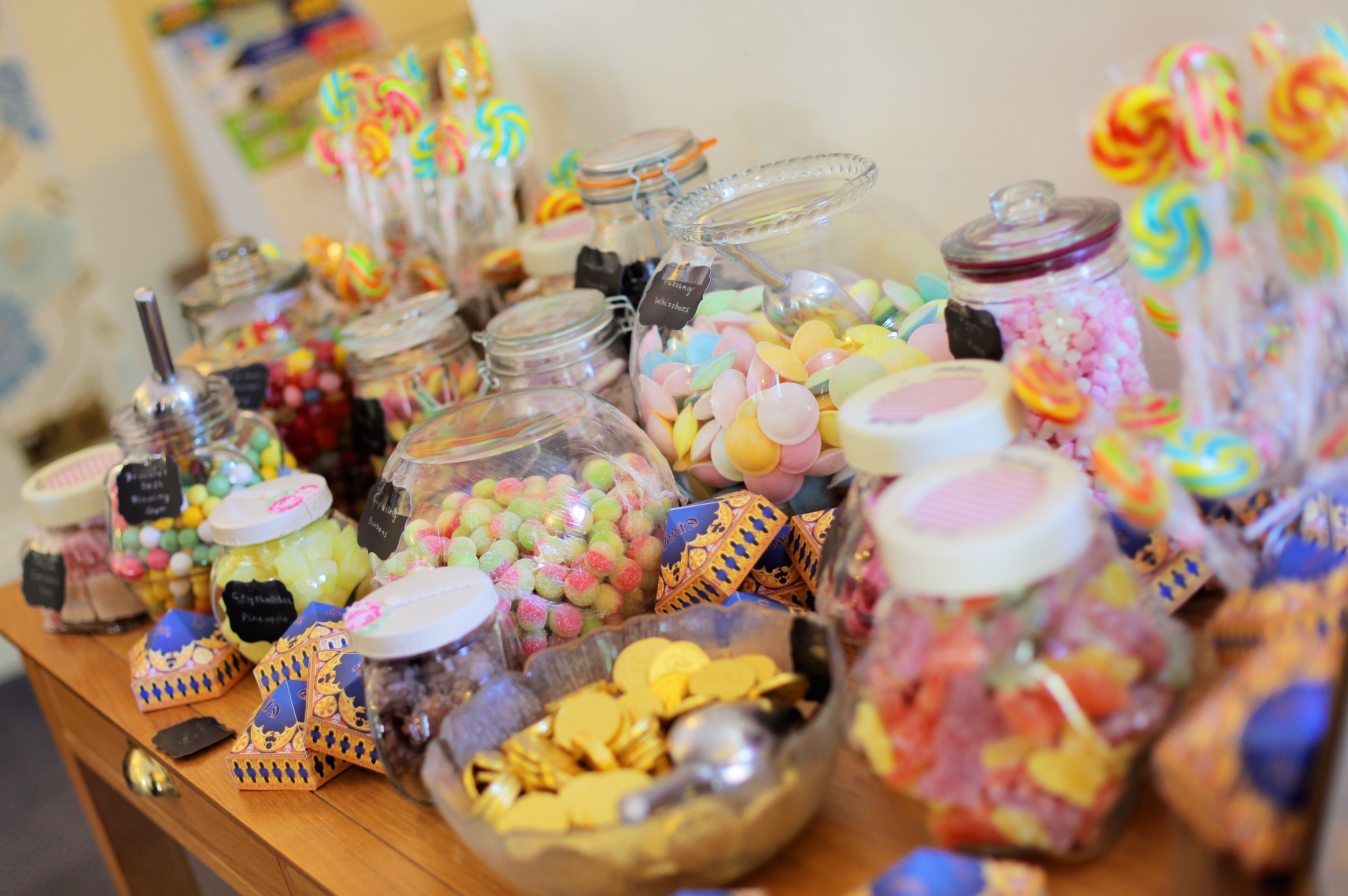 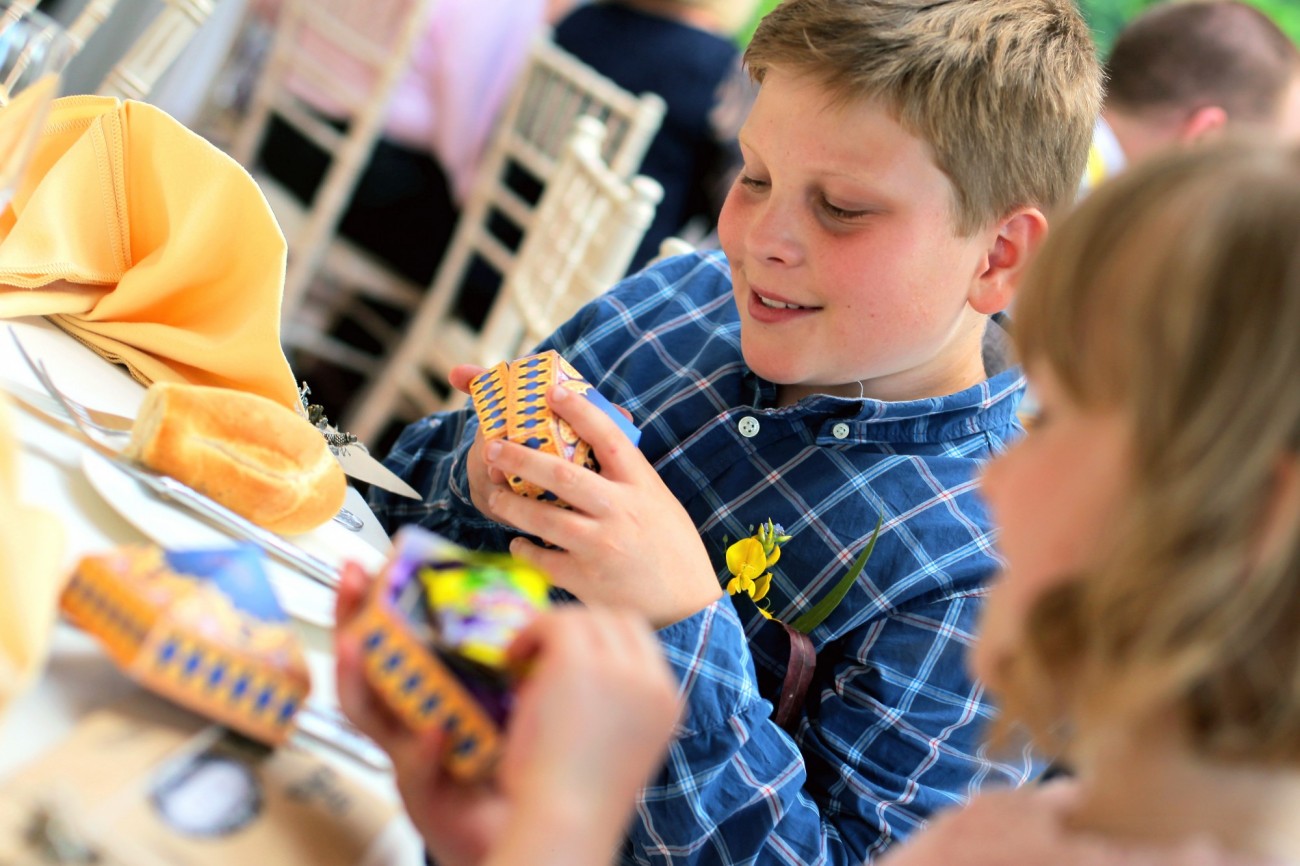 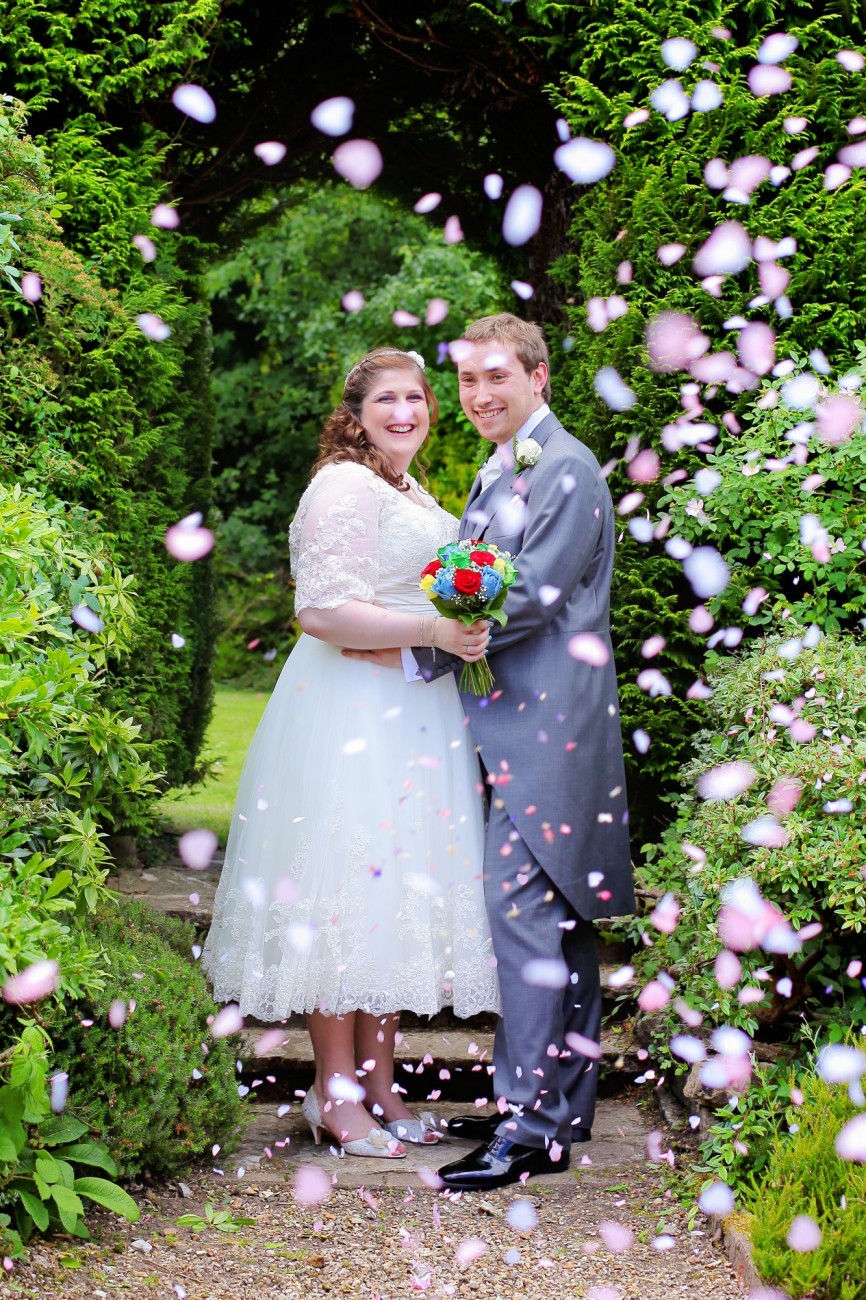 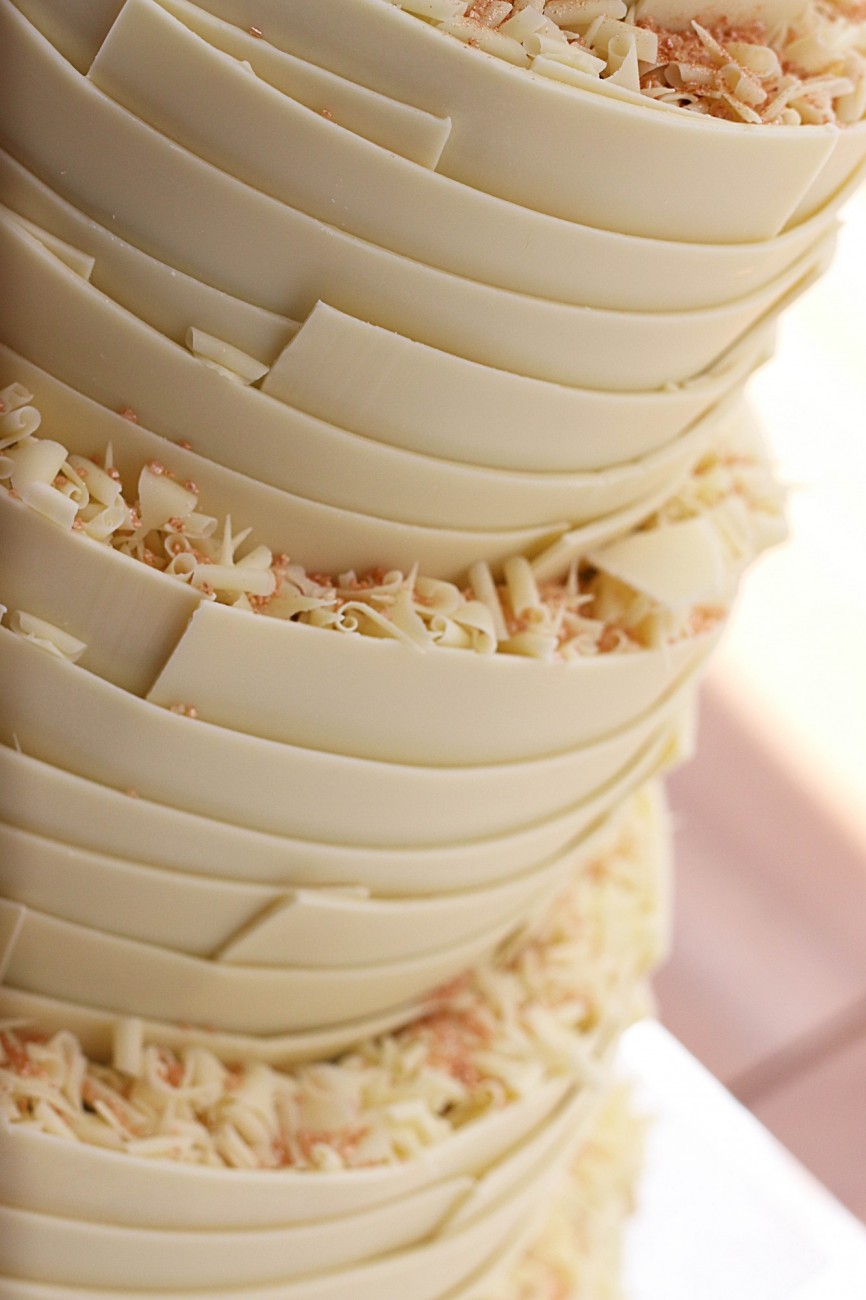 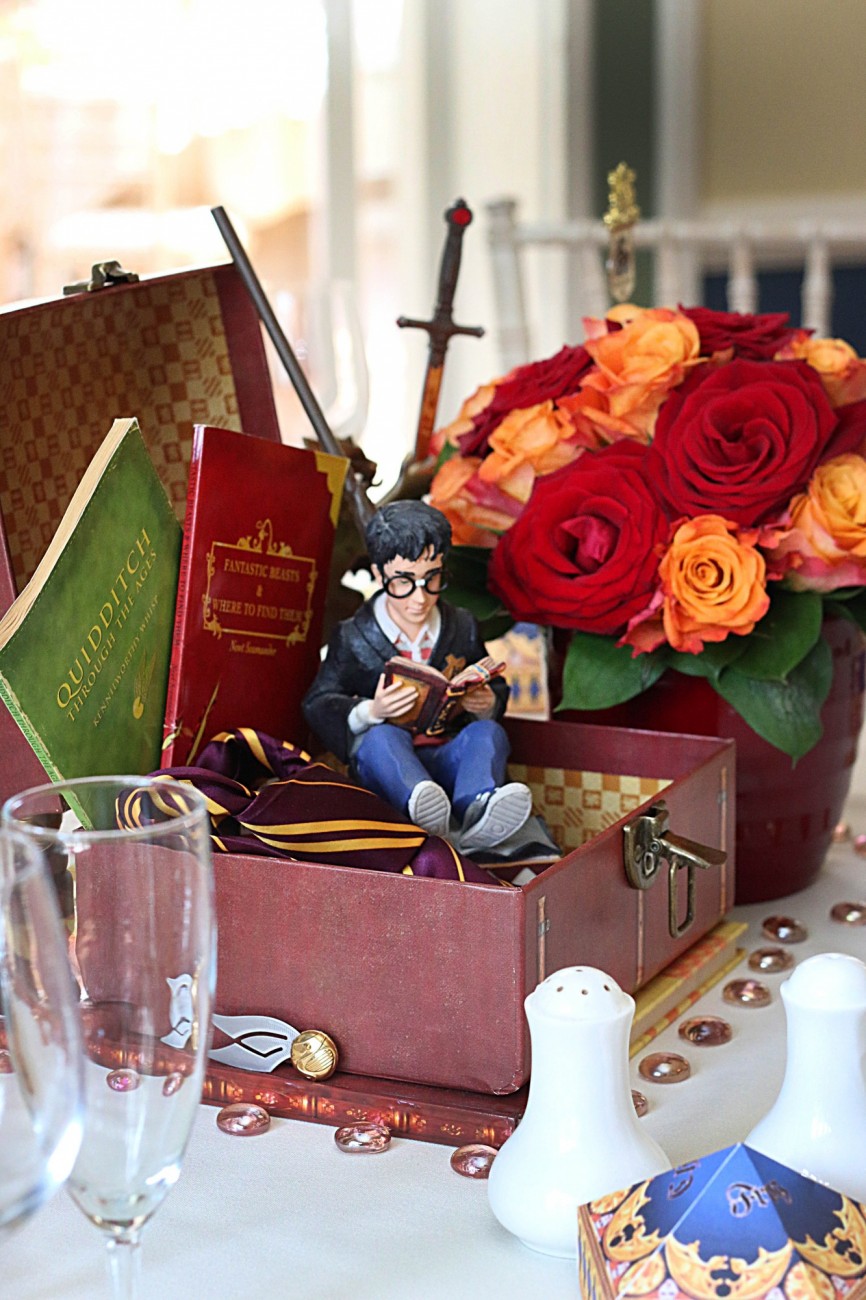 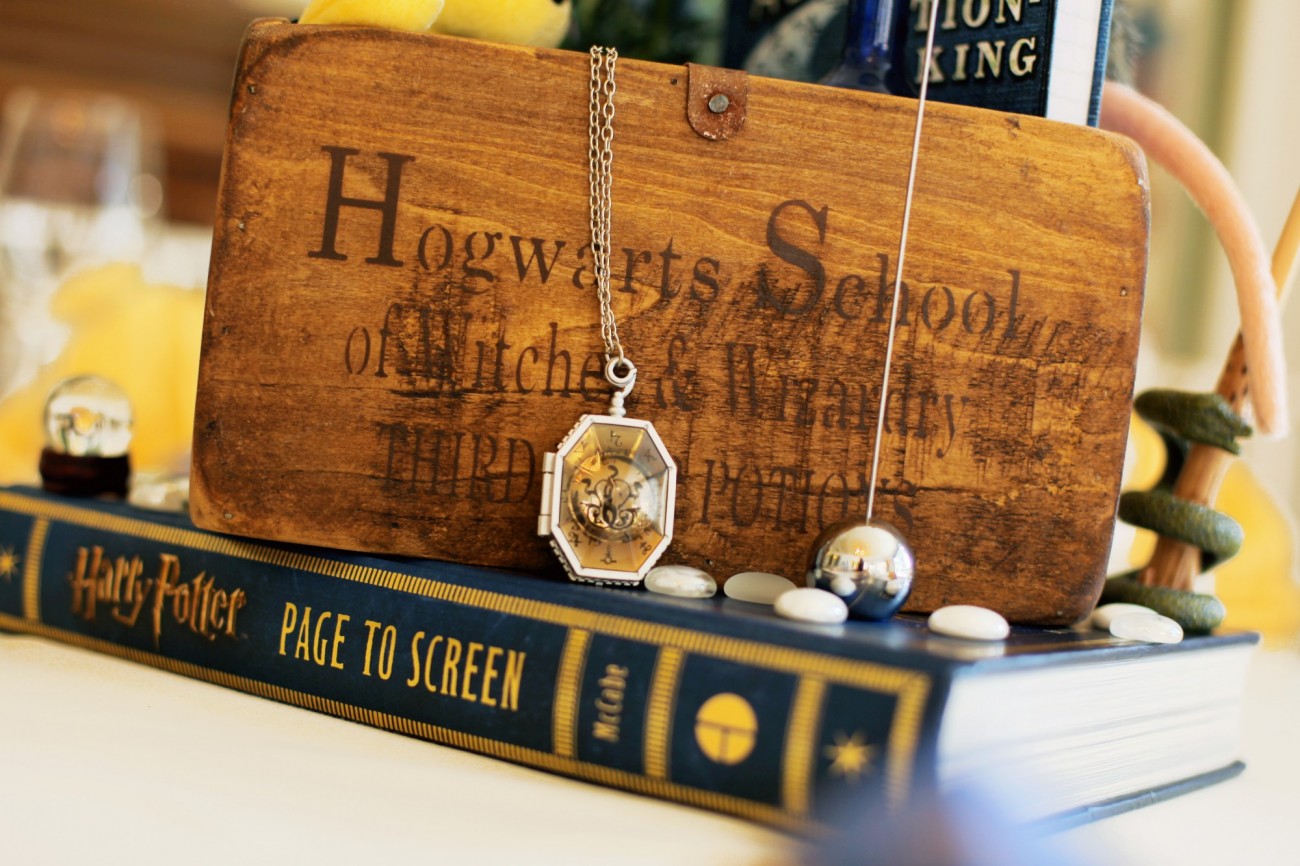 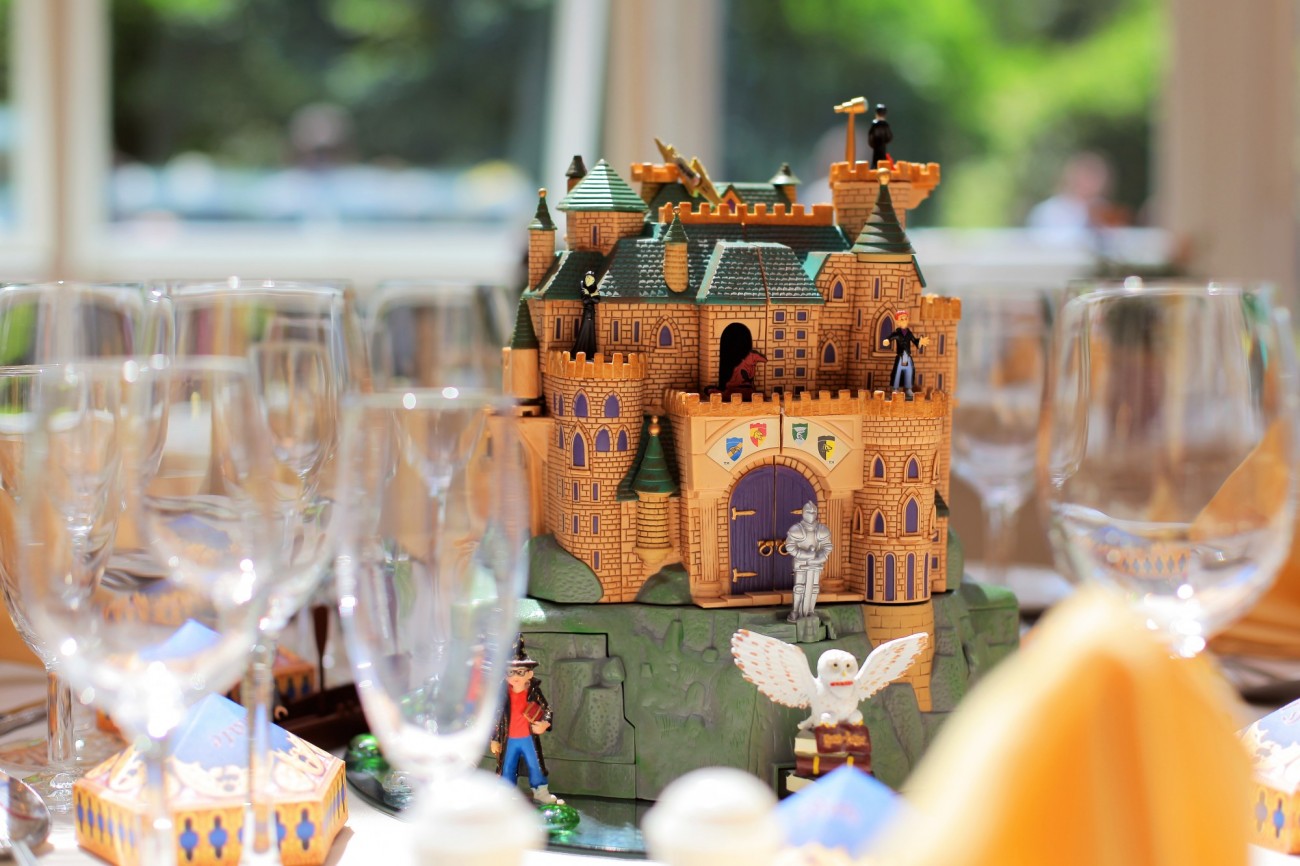 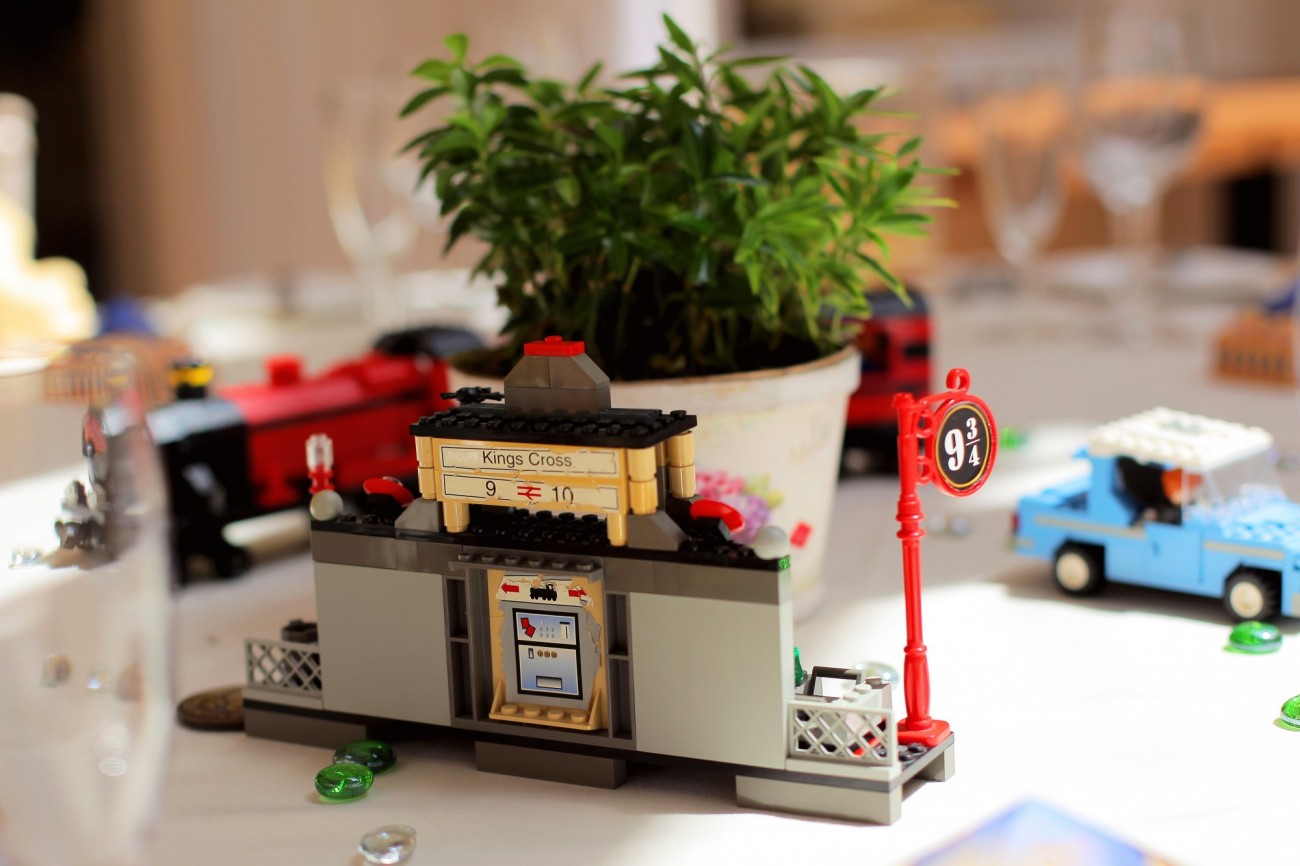 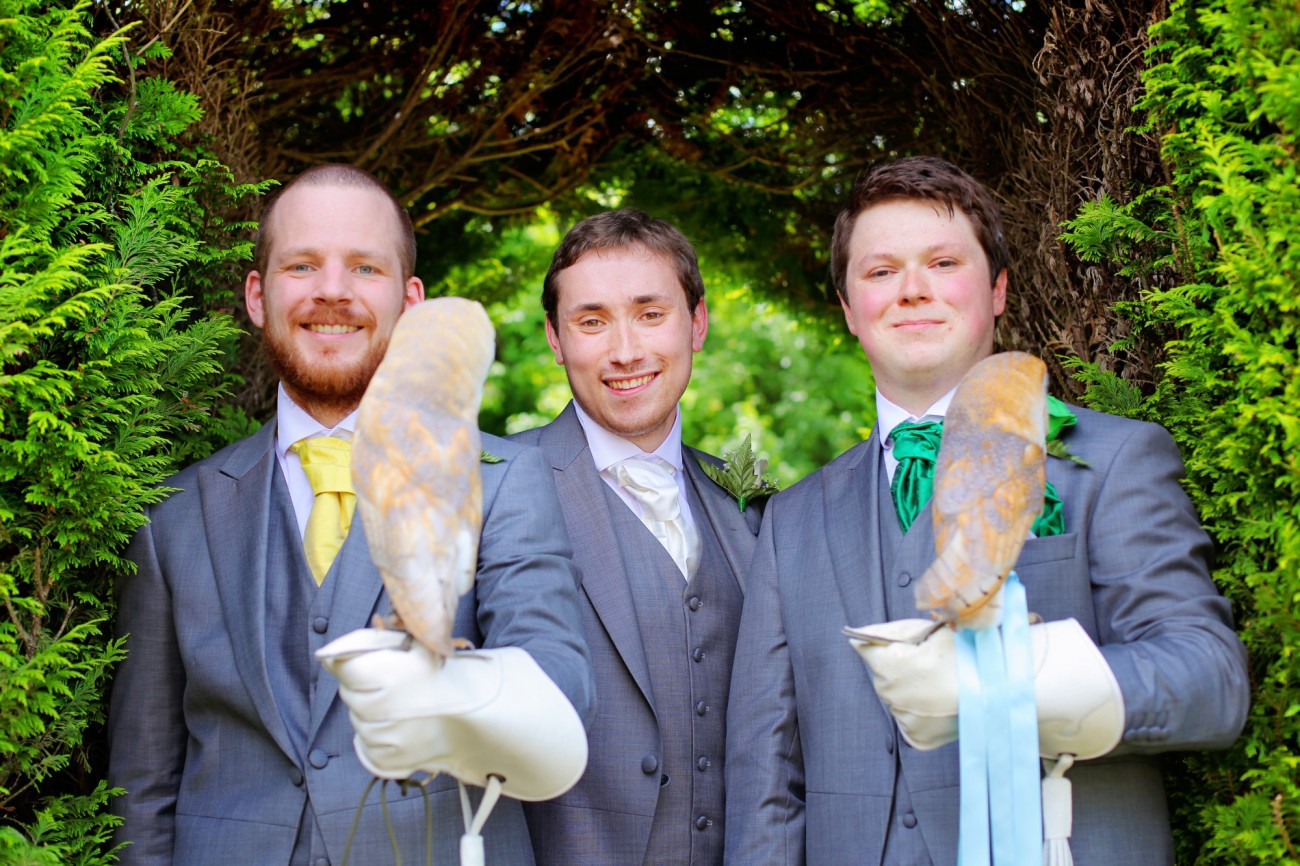 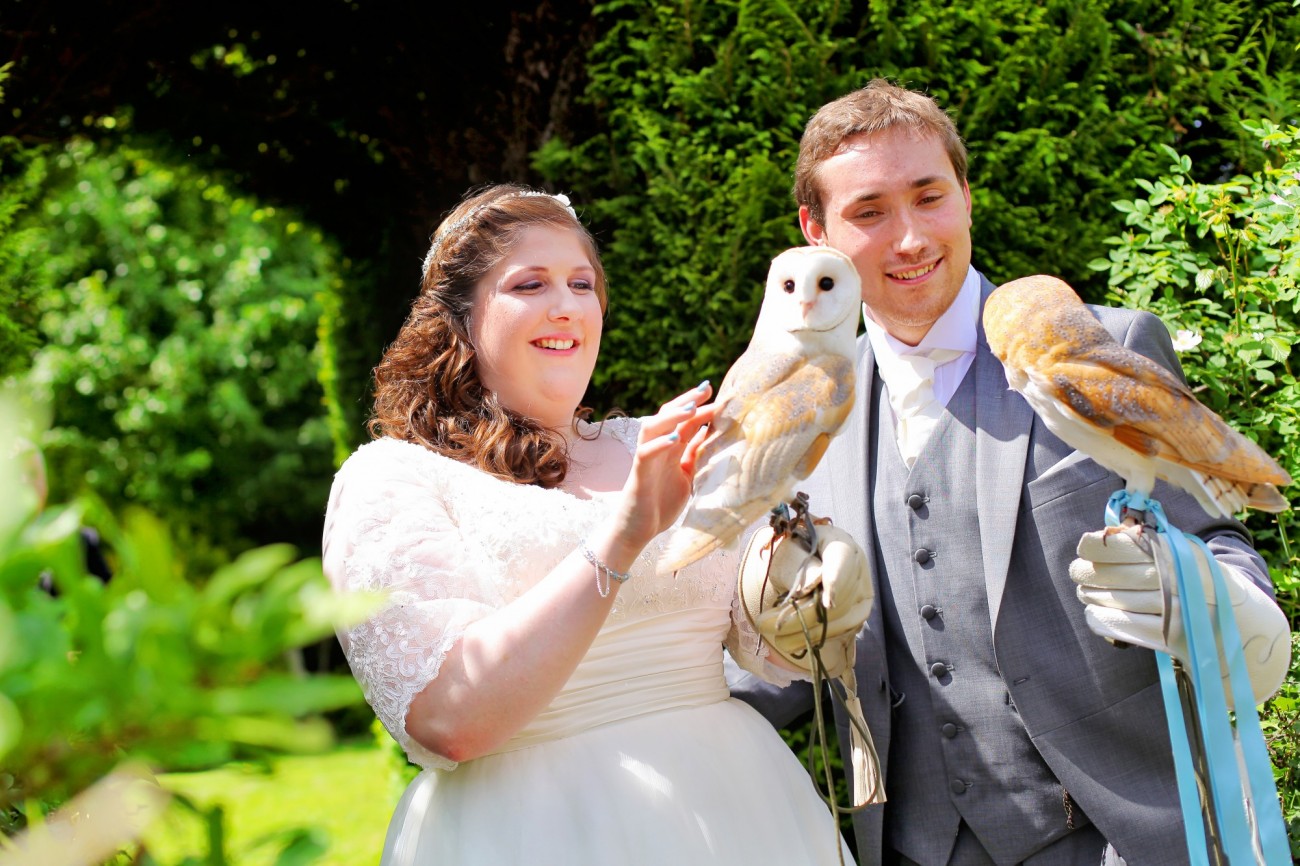 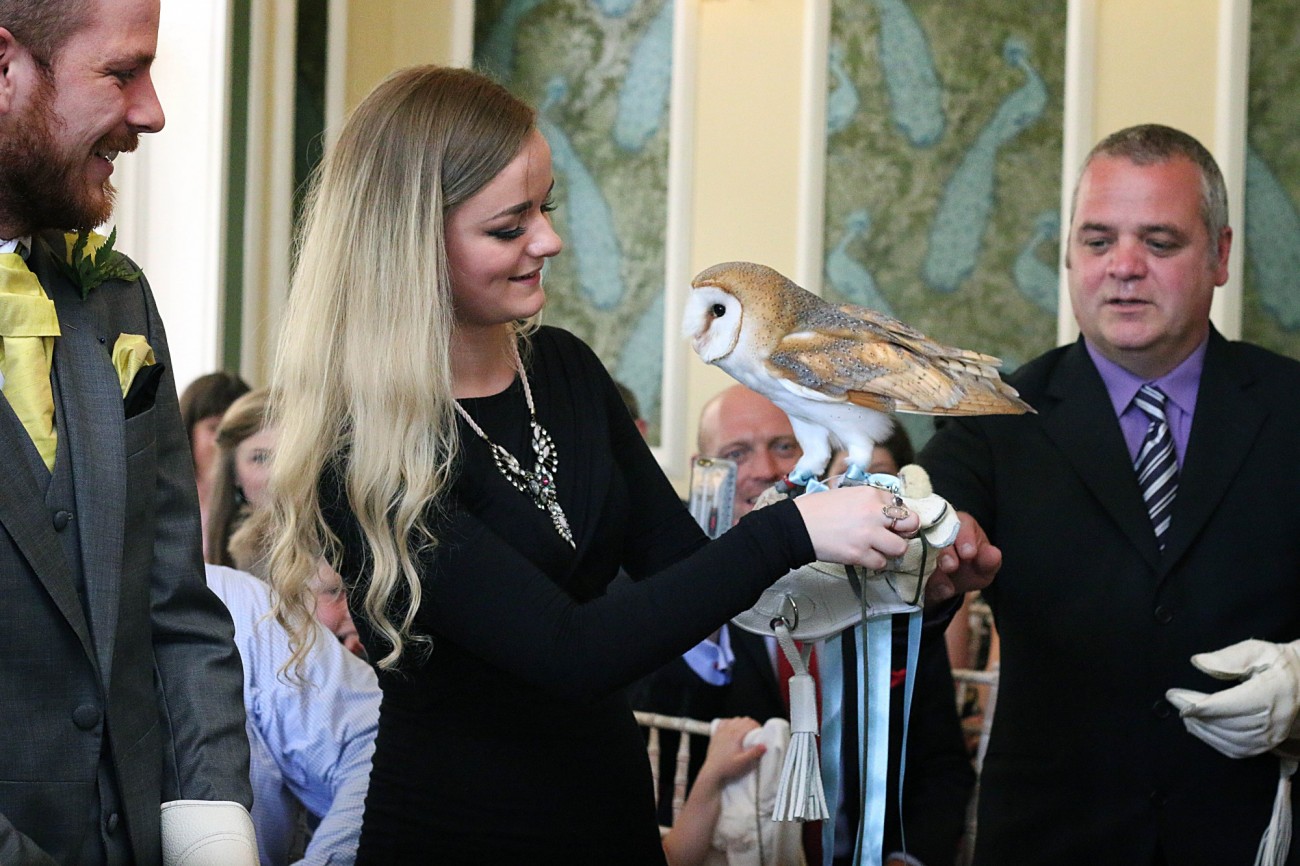 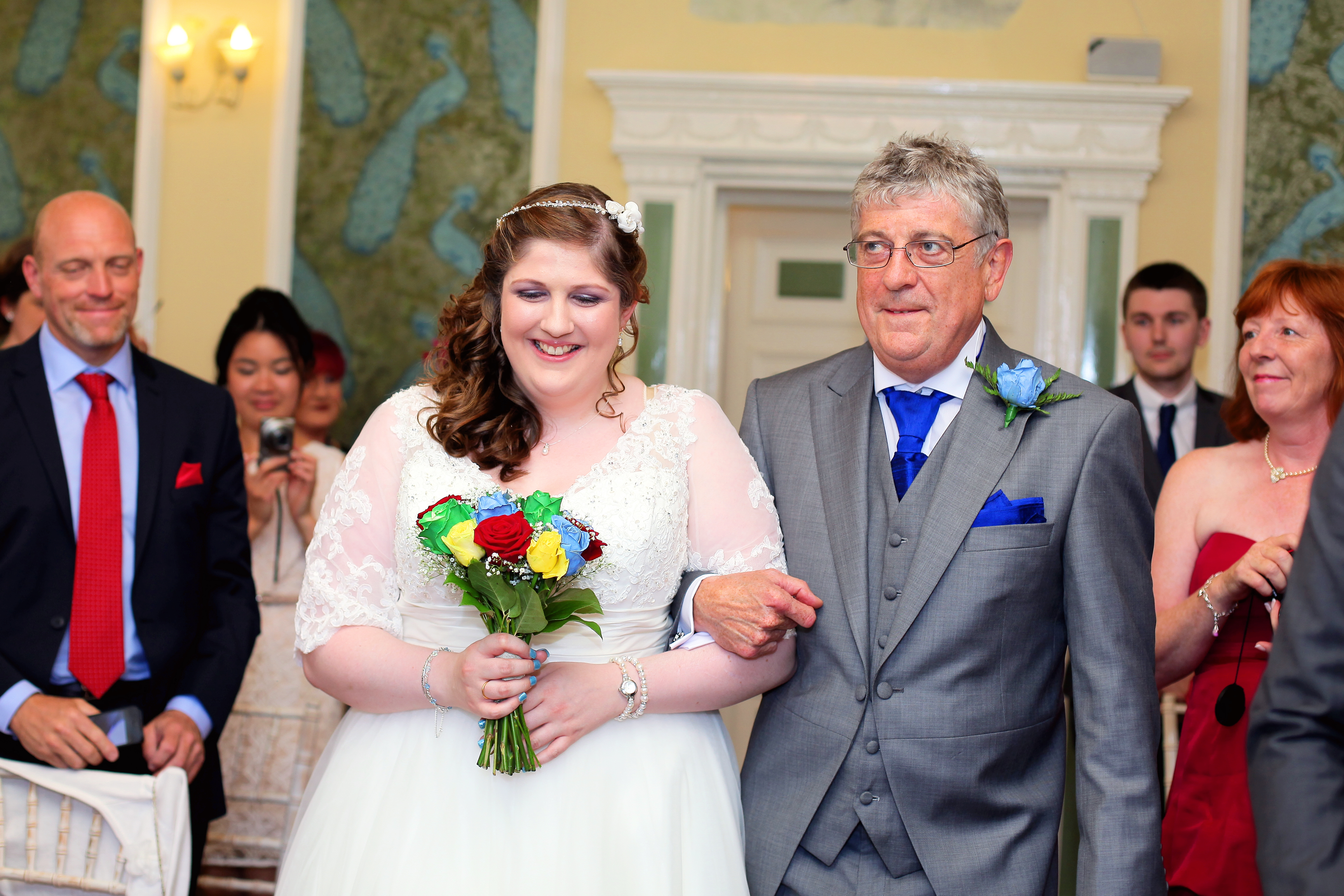 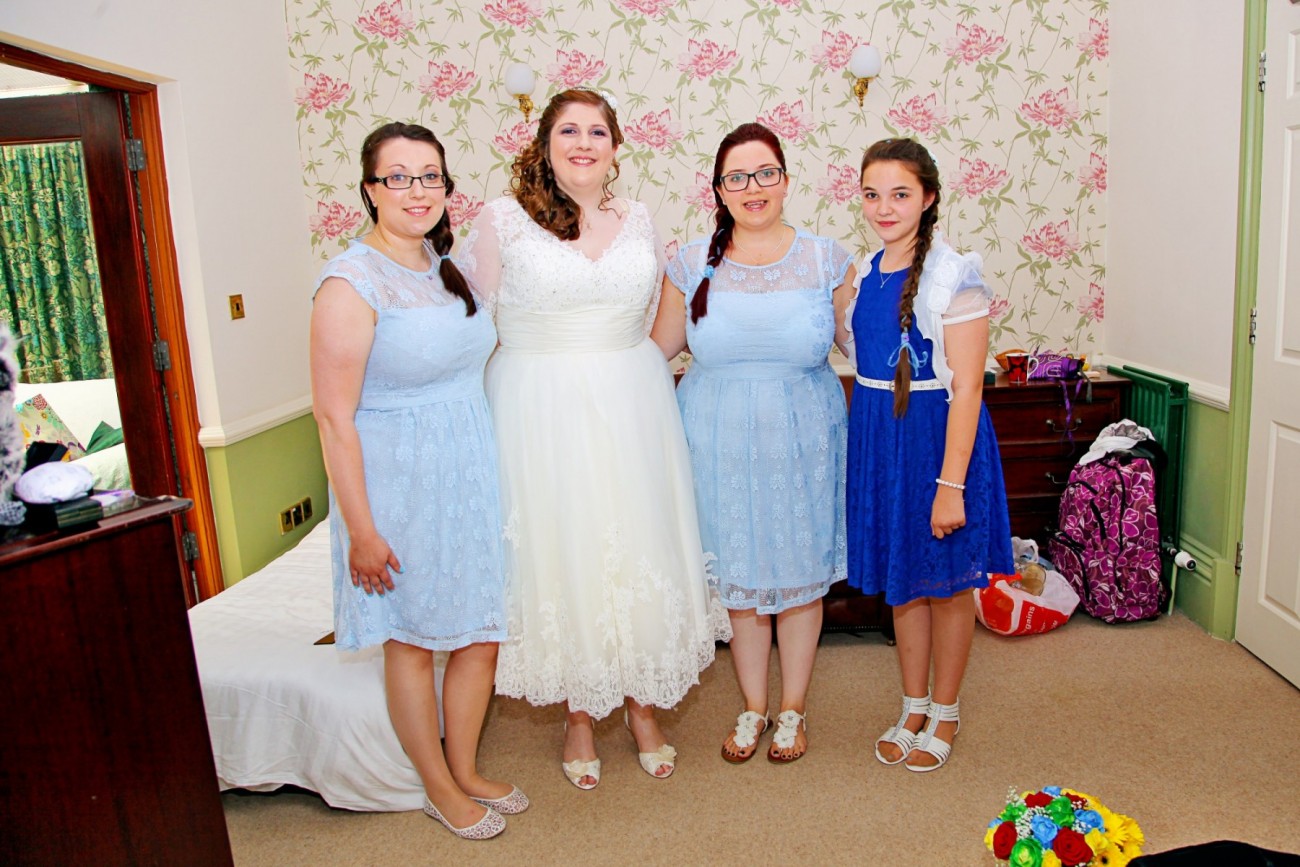 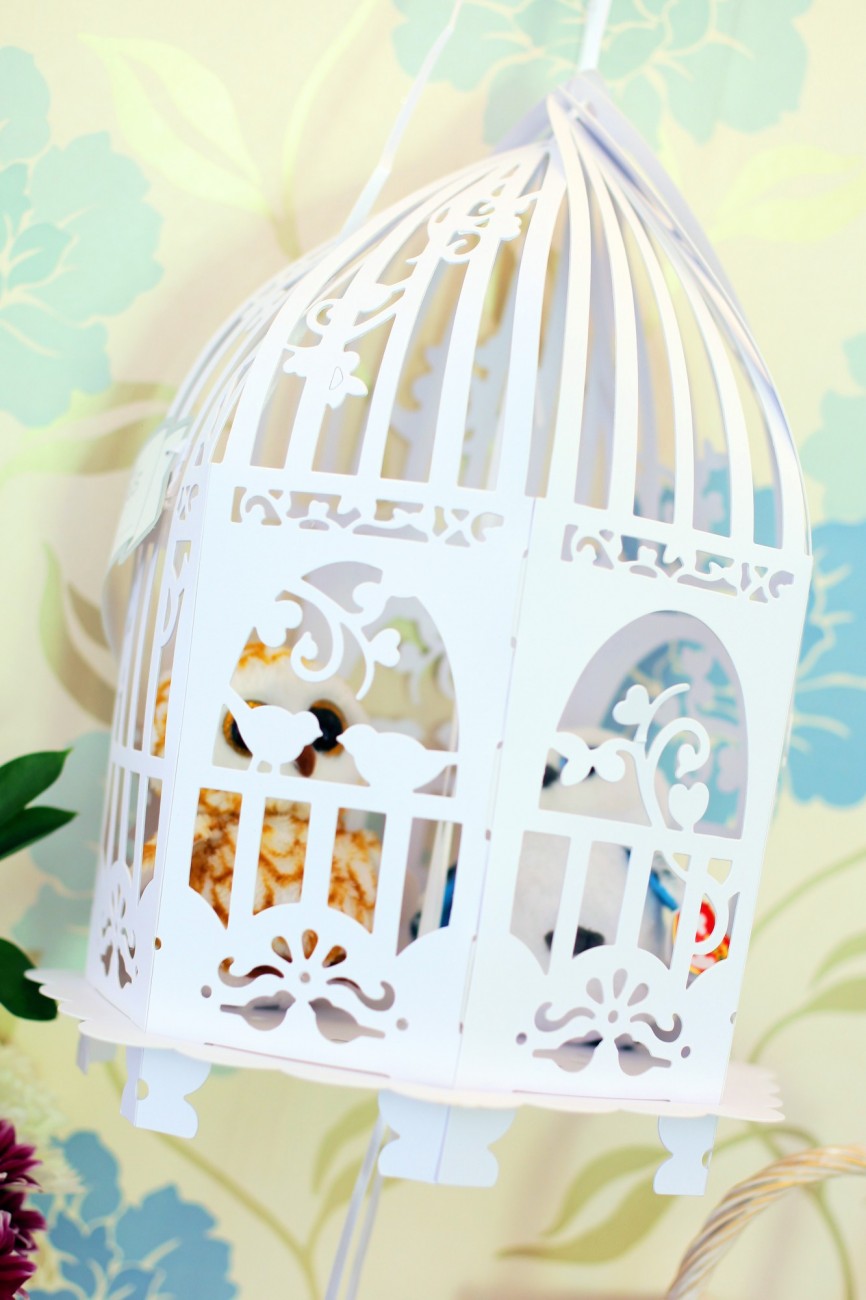 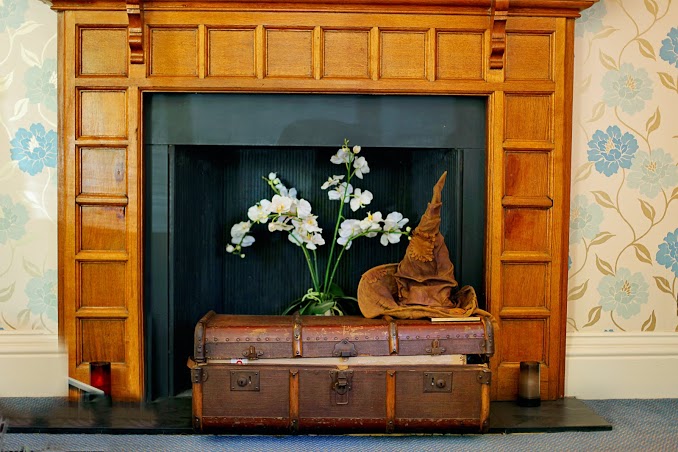