Who doesn’t love Legos? Who doesn’t want more Legos in their lives? Combining our two loves together (Legos and anything from the wizarding world) we were super stoked to hear that LEGO will be releasing a new wizarding world minifigures series this August!

The new series, the Wizarding World of Harry Potter Minifigures Series, includes favorite characters from both the Harry Potter and Fantastic Beasts series, and not just the super well-known and marketed characters like the trio; if you love Dean Thomas, he’s included as well! The list of characters included in this series is quite extensive: From the Fantastic Beasts series, we are given Credence Barebone, Percival Graves, Jacob Kowalski, Newt Scamander, Queenie Goldstein, and Tina Goldstein, and from the Harry Potter series, we are given Albus Dumbledore, Cedric Diggory, Cho Chang, Dean Thomas, Dobby, Hermione Granger, Filius Flitwick, Lord Voldemort, Luna Lovegood, Mad-Eye Moody, Neville Longbottom, Ron Weasley, Sybill Trelawney, Harry Potter (in school robes), Draco Malfoy (in Quidditch robes), and Harry Potter (again – but this time in his pajamas… because why not?).

As pictured in the gallery below, it appears that each of the characters included in this minifigures series comes with some iconic props – because where would Tina be without her mustard-loaded hot dog? Or how would Dean Thomas be recognized without being decked out in Quidditch gear? If there’s a minifigure of Harry in his pajamas, then it must come with an Invisibility Cloak. We are loving LEGO’s iconic sense of humor in portraying these characters.

These fantastic new wizarding world minifigures will be available August 1 – on sale for $4 a piece. (Given the small parts, they are not recommended for little wizarding fans under the age of five.) 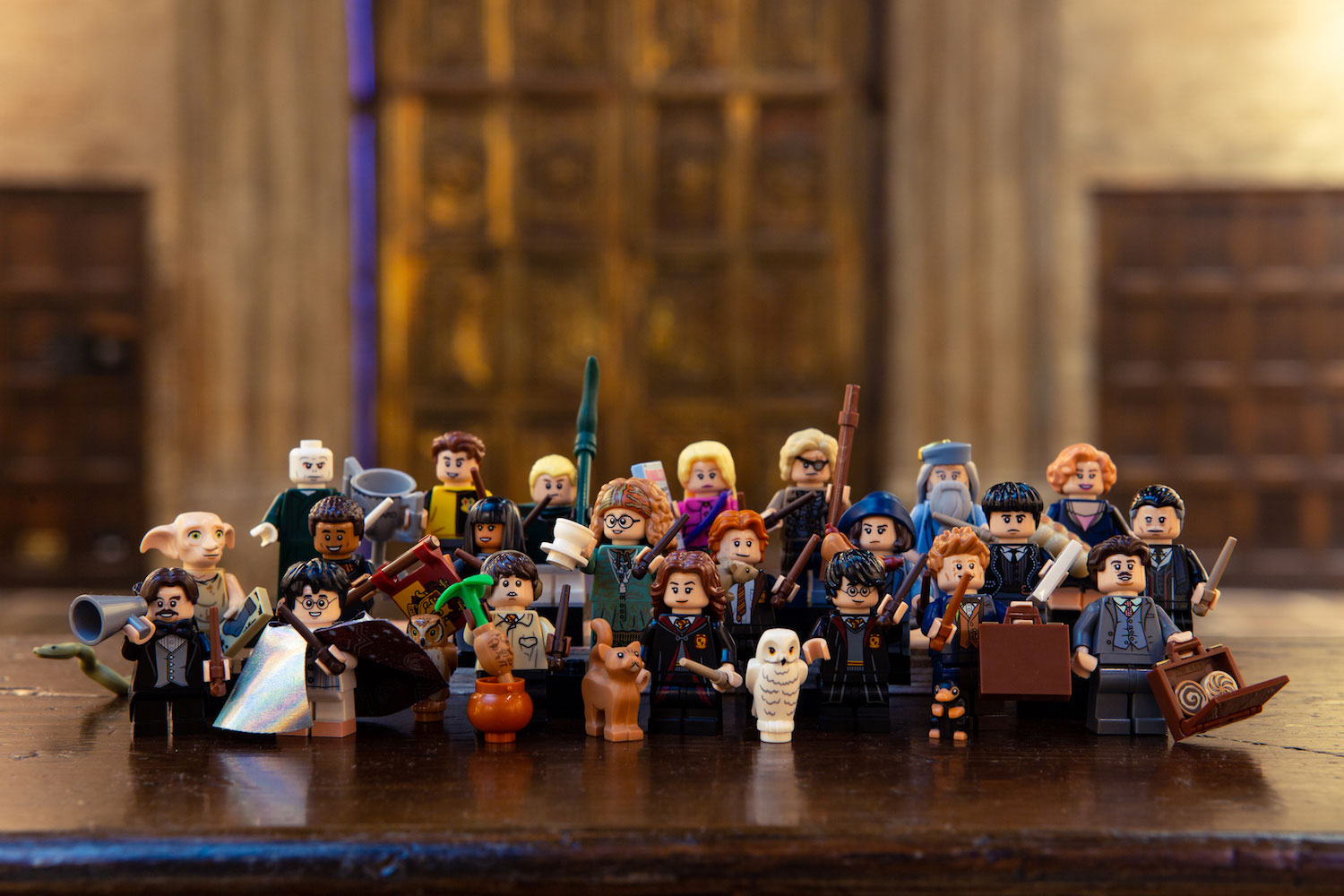 The complete LEGO minifigures wizarding world series – characters and props – is displayed at the Studio Tour. 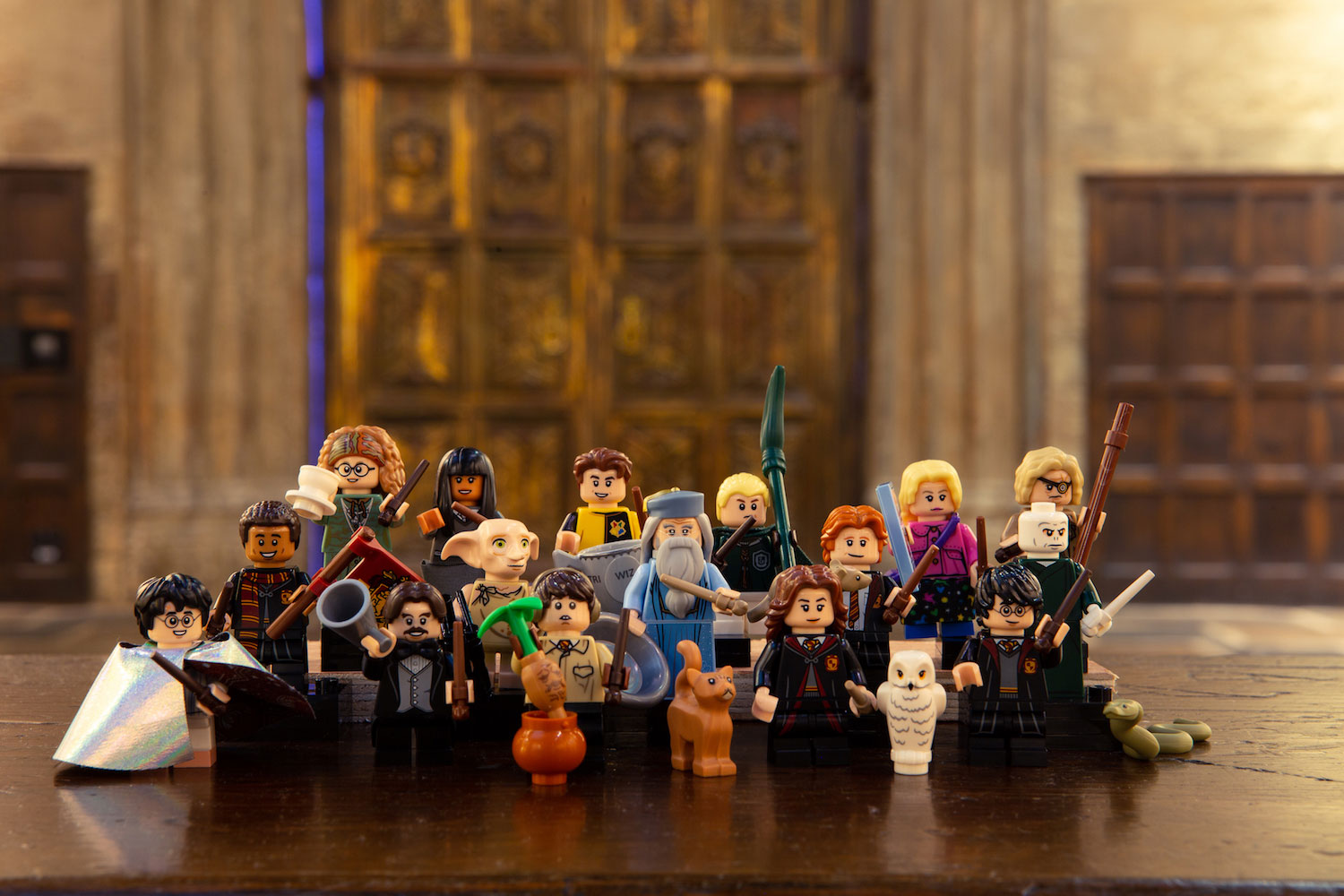 All the “Harry Potter” LEGO minifigures pose in front of the Great Hall doors at the Studio Tour. 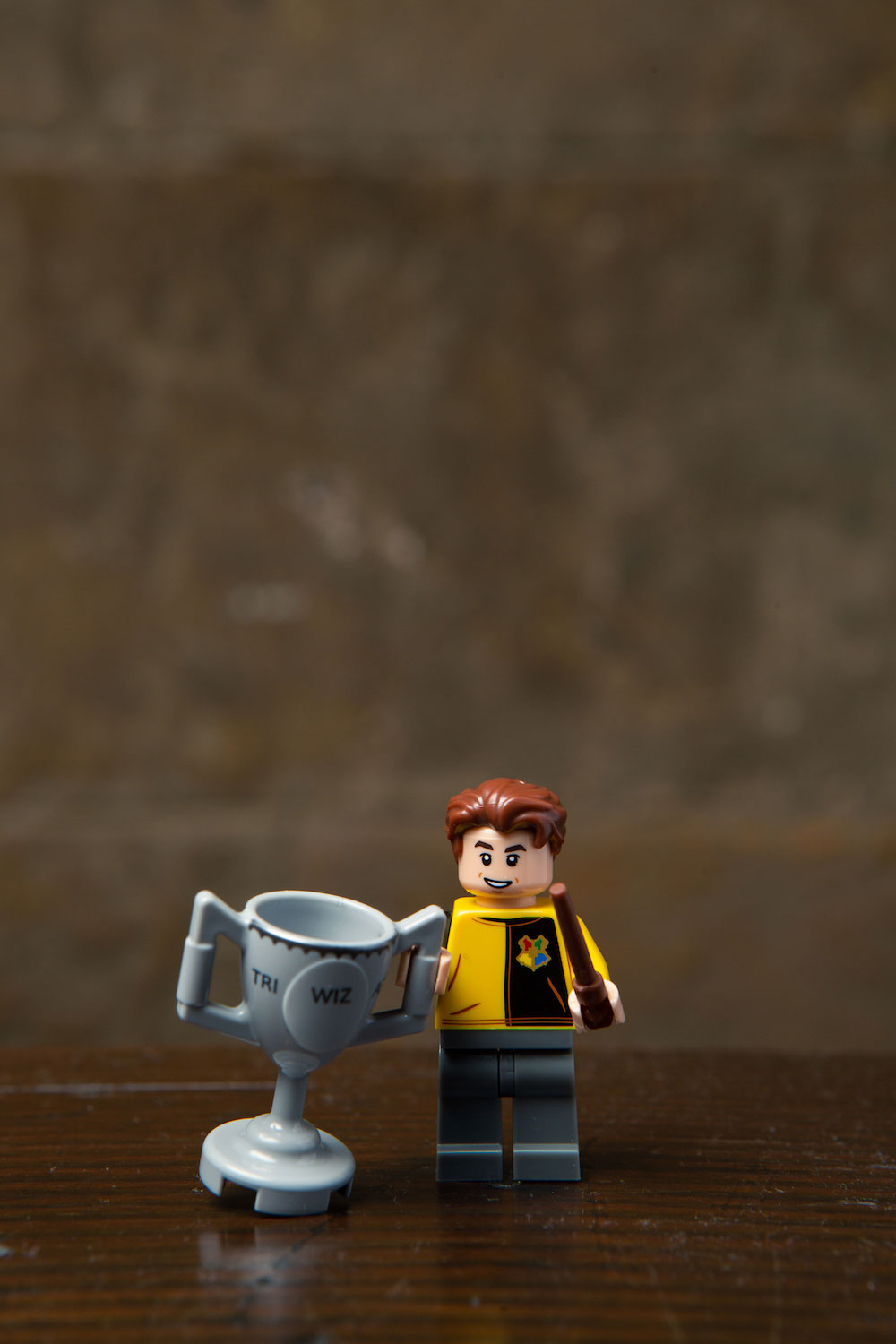 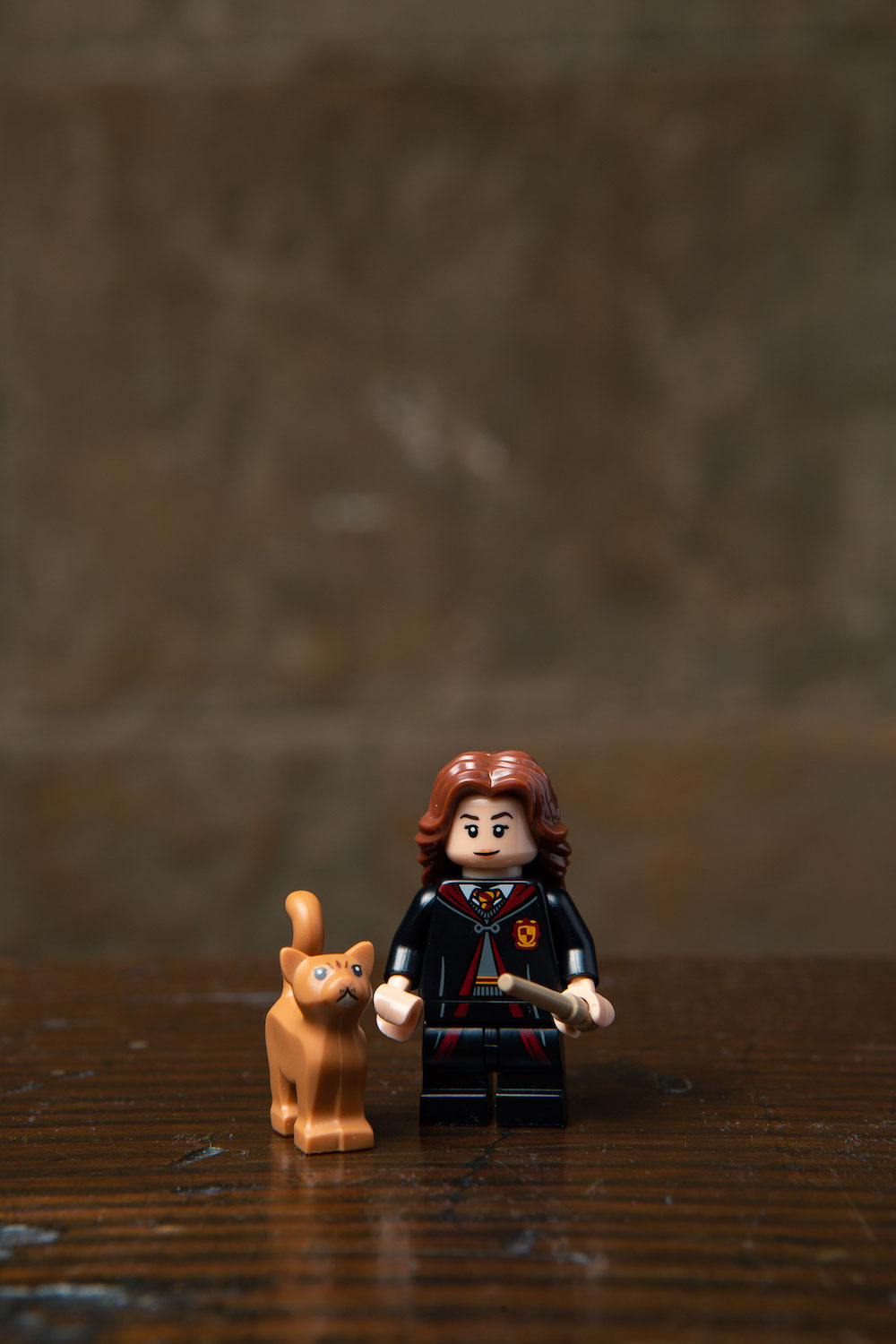 Hermione brought along her fluffy friend in the LEGO minifigures series. We wonder how Ron and Scabbers feel about that… 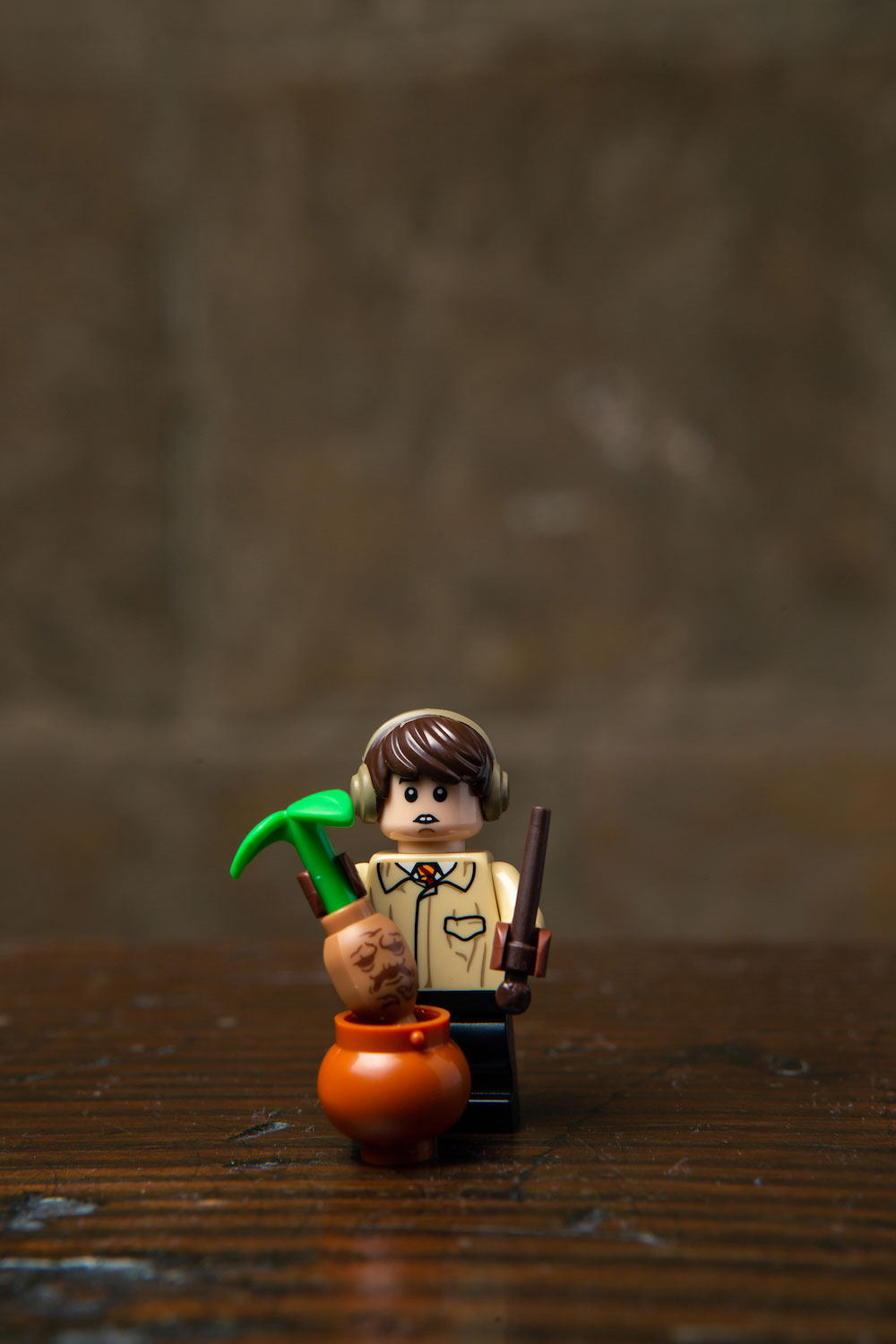 We are loving the expression on Neville’s face as he pulls a mandrake from its pot. At least he remembered to secure his earmuffs.

We are so excited to see Dean Thomas and his passion for Quidditch included in this series. 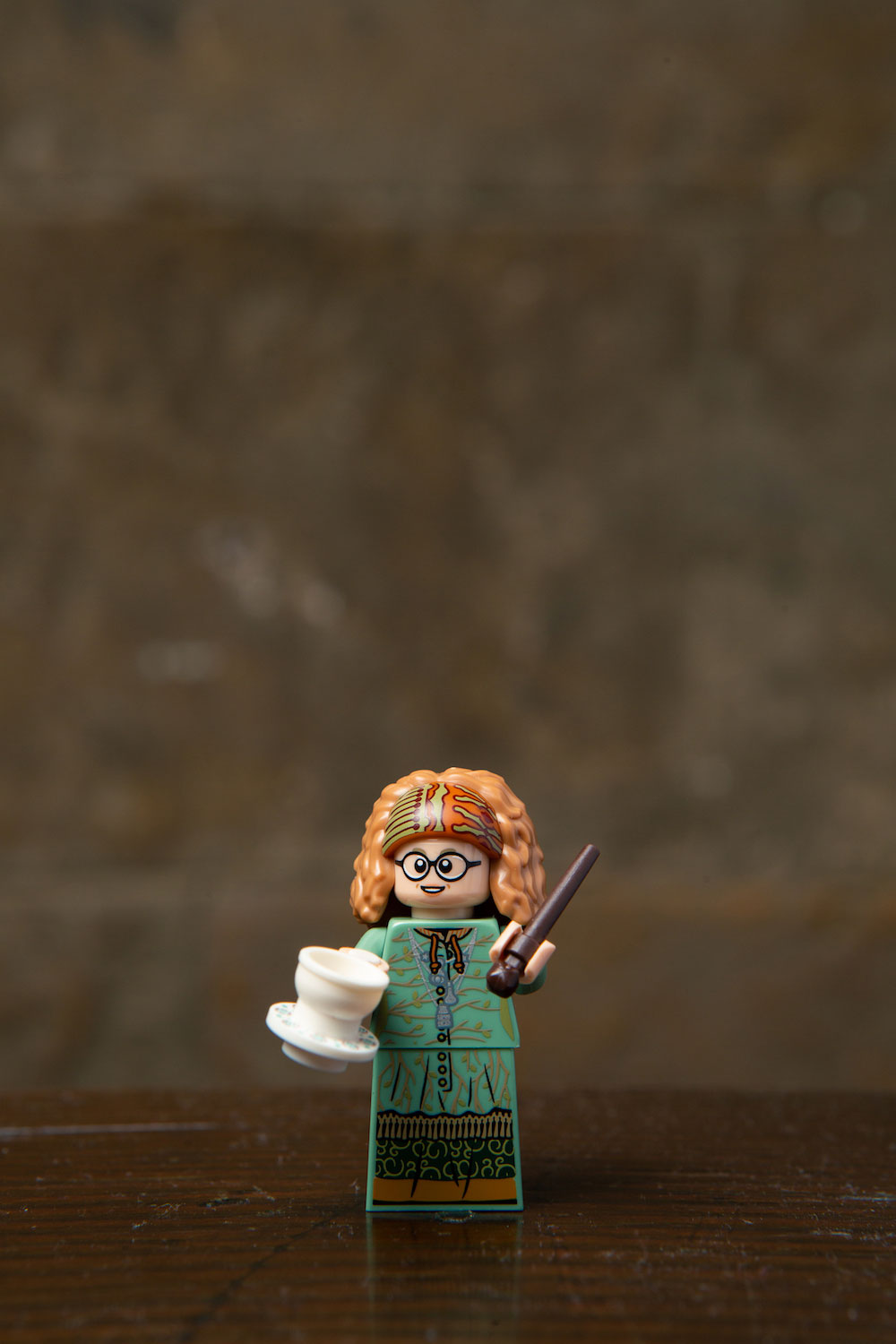 Trelawney and her teacup predict that you should collect all these amazing LEGO minifigures from the new wizarding world series. 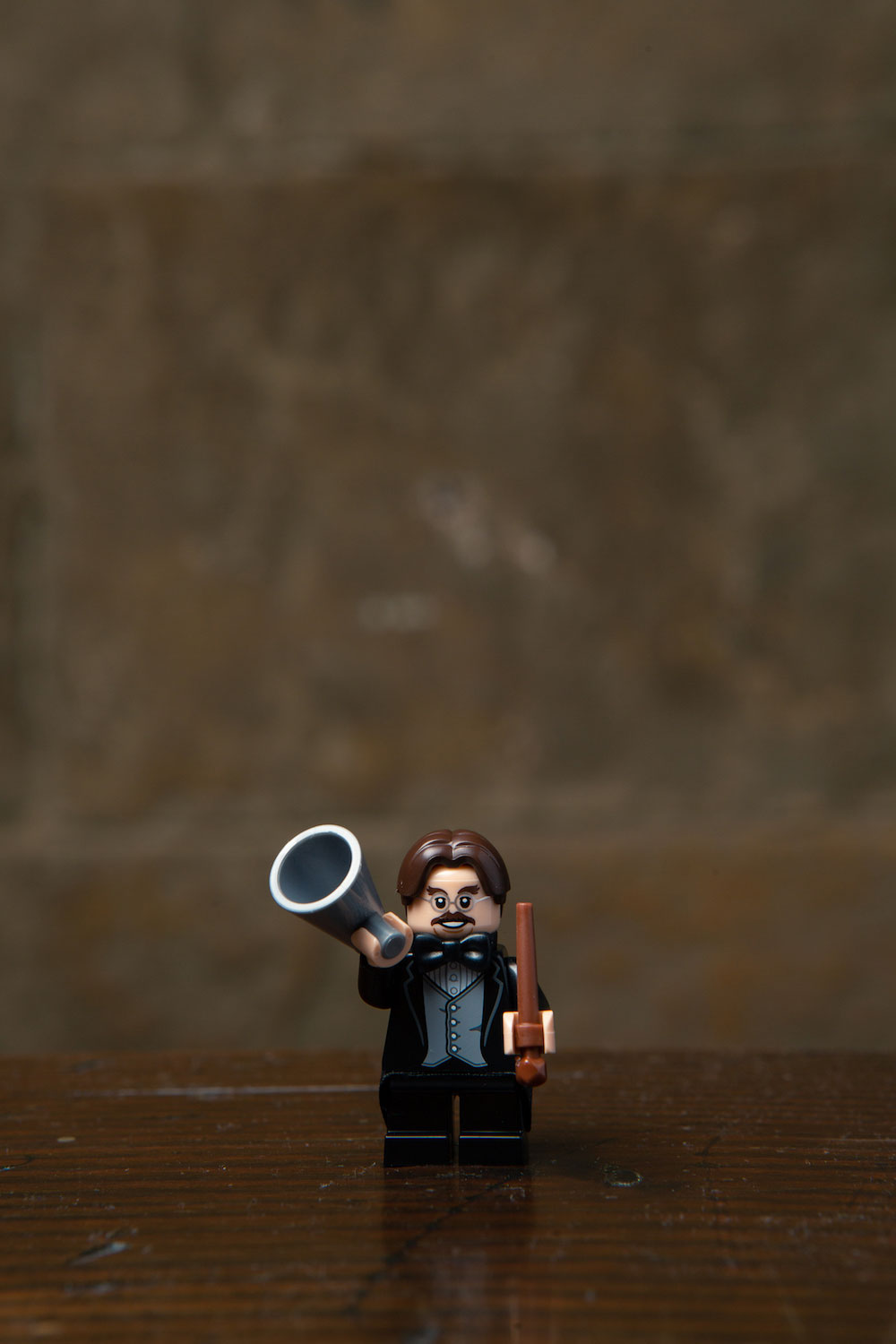 Professor Flitwick is featured with his bullhorn? Wizarding choir practice must be getting a little too loud…

What’s in the empty Pensieve, Dumbledore? Is it too mini for us to jump in? 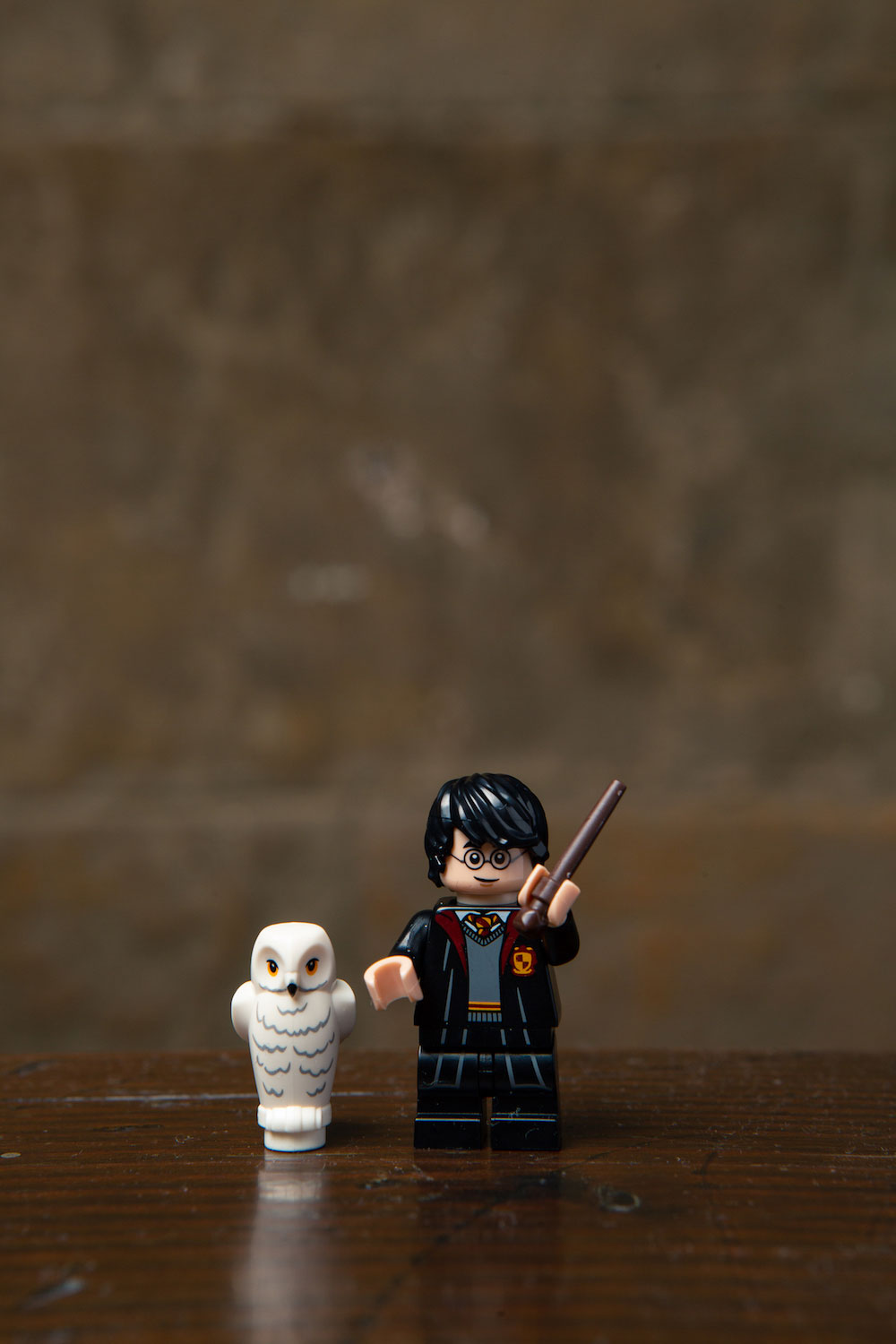 A classic Harry Potter in Gryffindor robes with a little LEGO Hedwig couldn’t be left out of this new series! 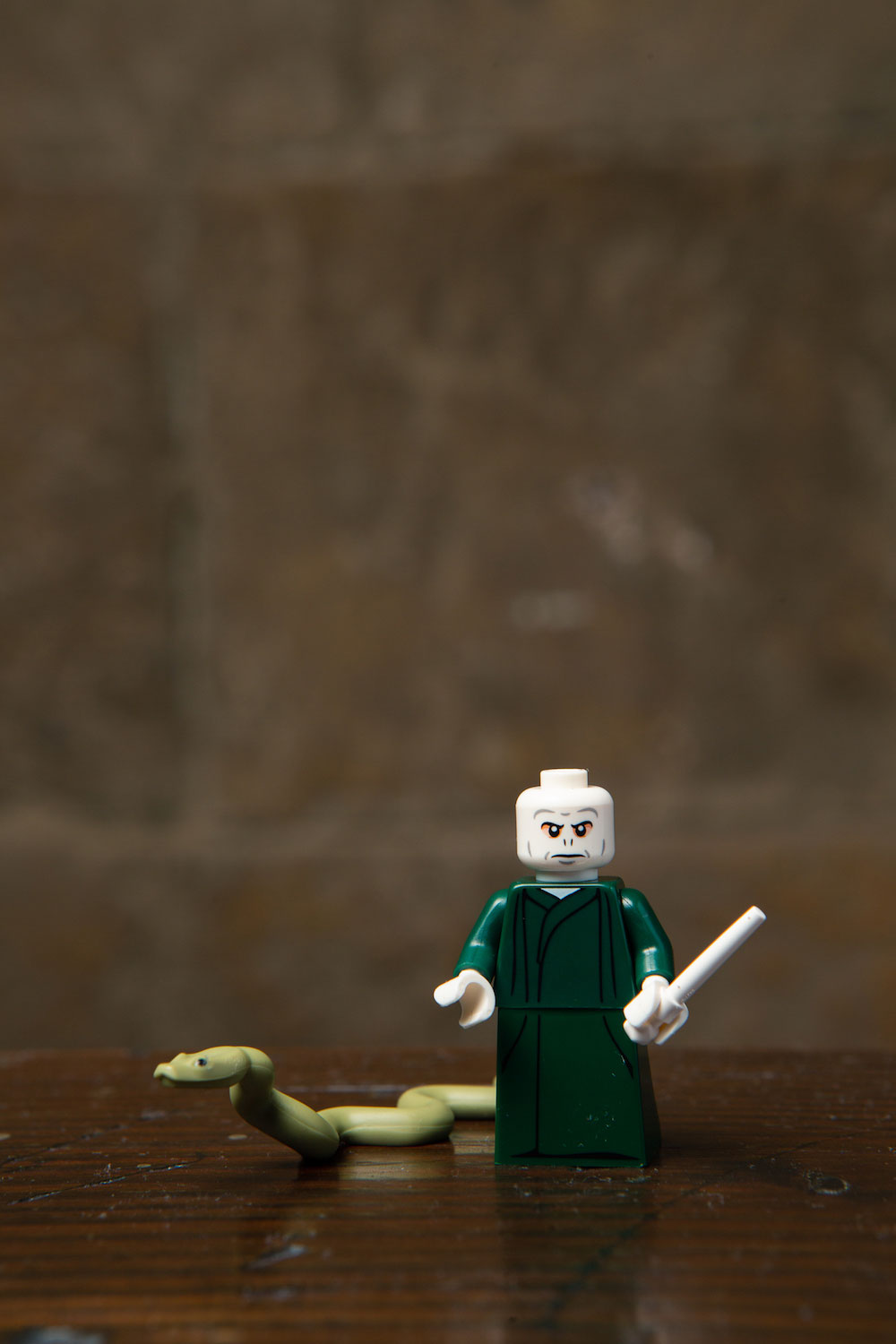 Voldemort and his loyal side-snake Nagini are included in the new LEGO minifigures series! 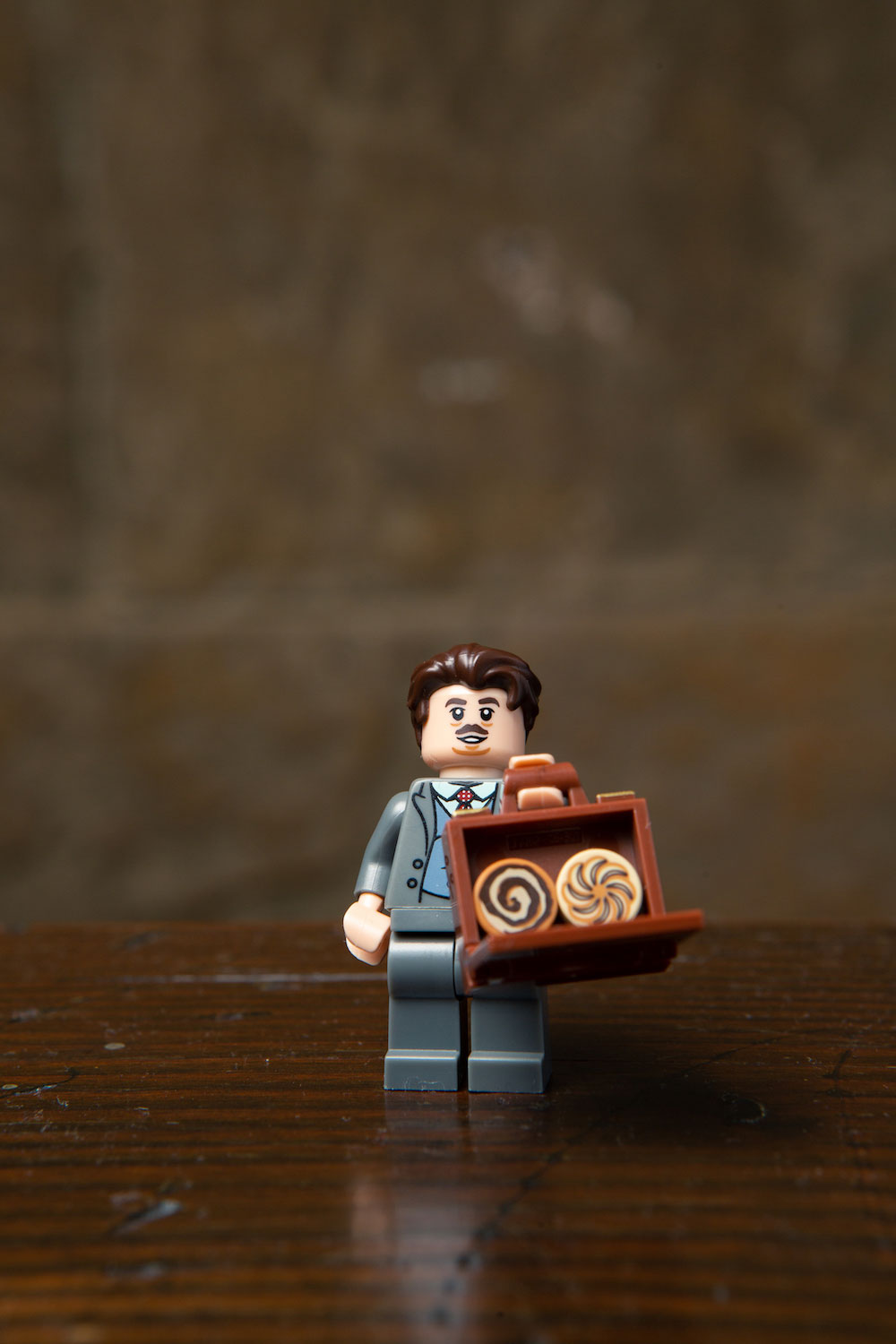 LEGO couldn’t include Jacob without his open briefcase of sweets. At least, we’re sure it’s his case before opening it this time. 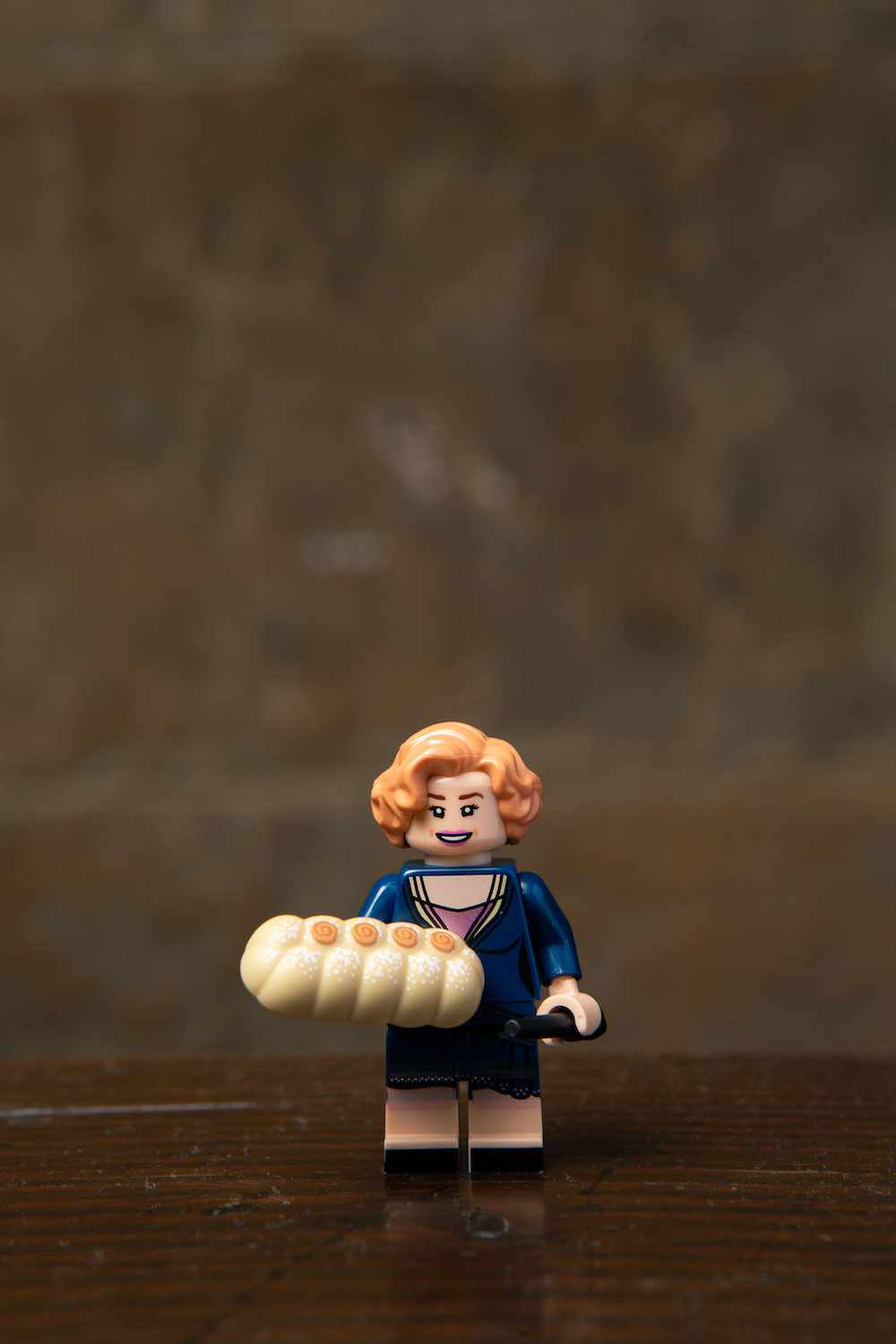 Queenie’s LEGO minifigure includes a LEGO strudel… we wish we could eat it. (LEGO minifigures and all their parts not advised for children under 5.) 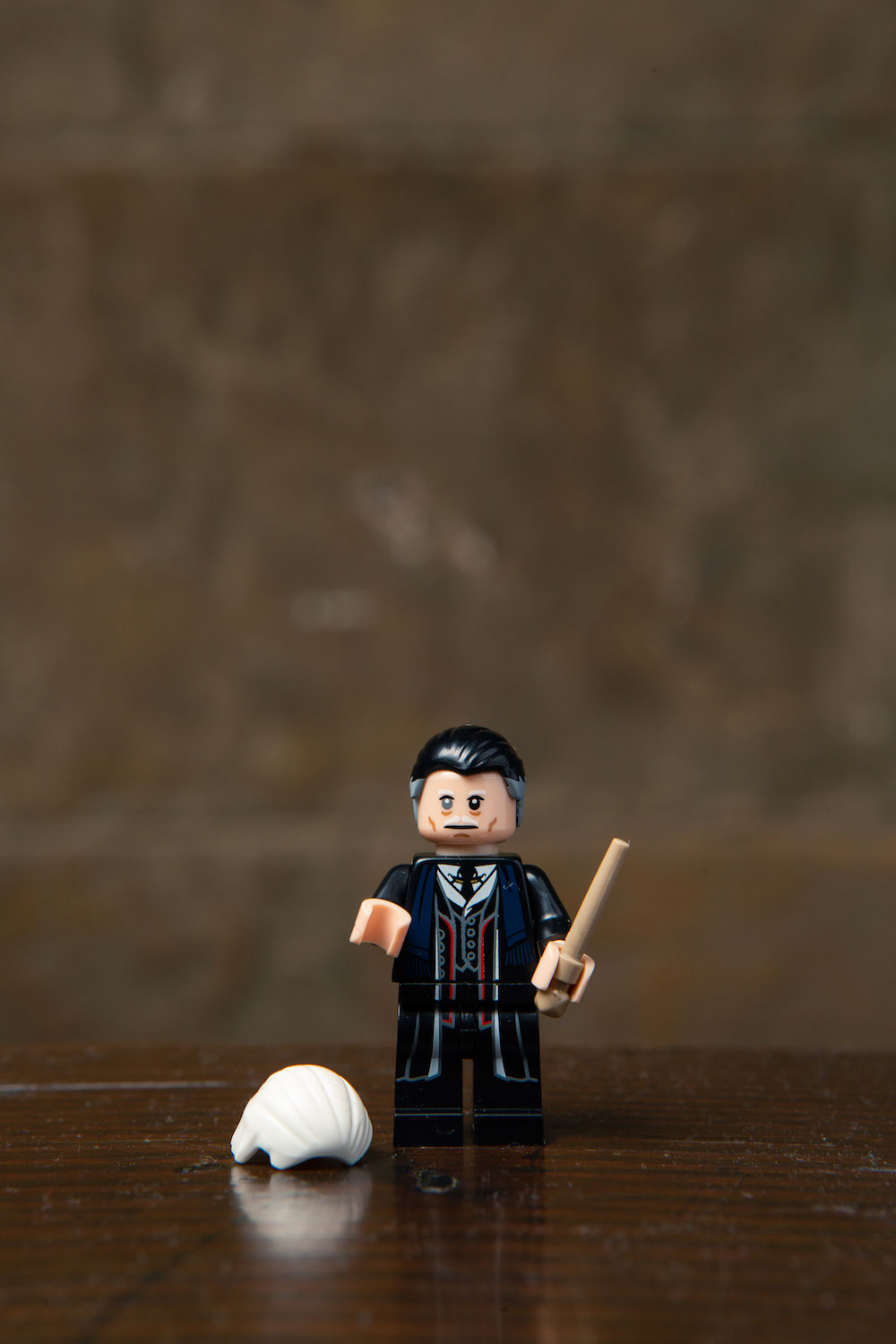 Graves or Grindelwald? LEGO gives you the option of transforming this minifigure.

A Graves minifigure is included as a part of the “Fantastic Beasts” collectibles in the LEGO minifigures wizarding world series.

All of the figures included in the “Harry Potter” group of LEGO minifigures pose in front of Diagon Alley at the Studio Tour. 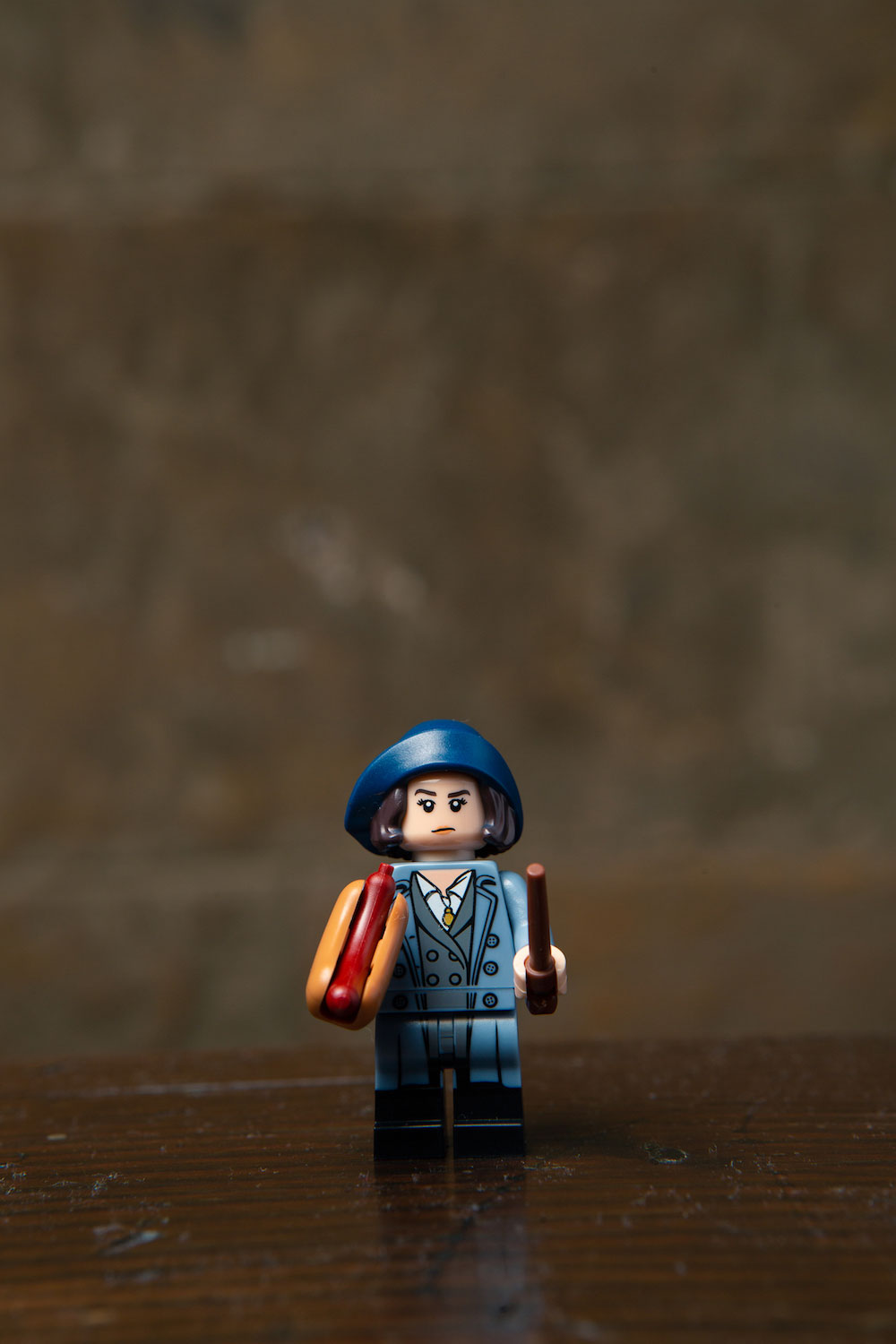 Tina’s LEGO minifigure includes a hot dog… and perhaps a little smudge of mustard on her face. 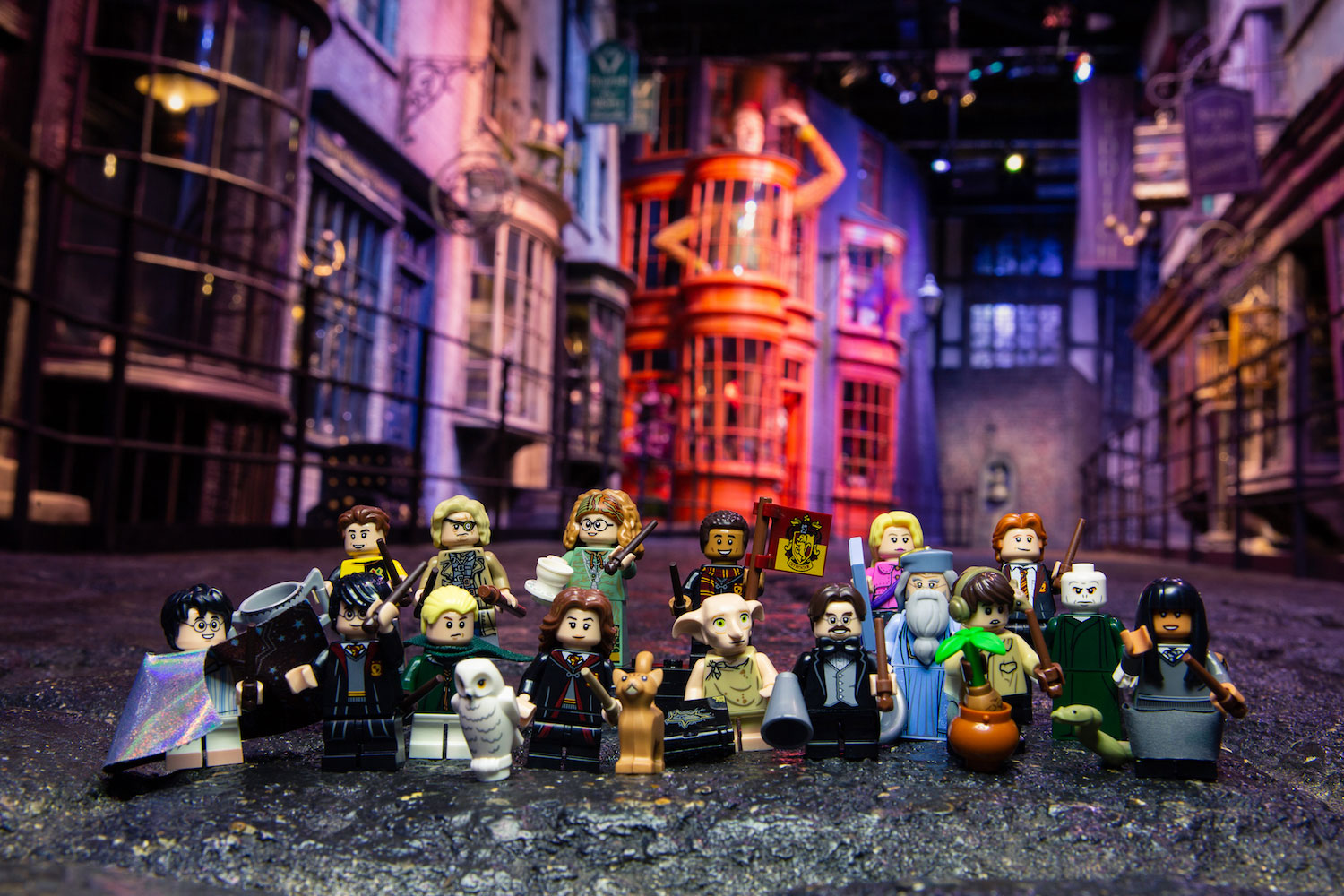 All of the figures included in the “Harry Potter” group of LEGO minifigures pose in front of Diagon Alley at the Studio Tour. 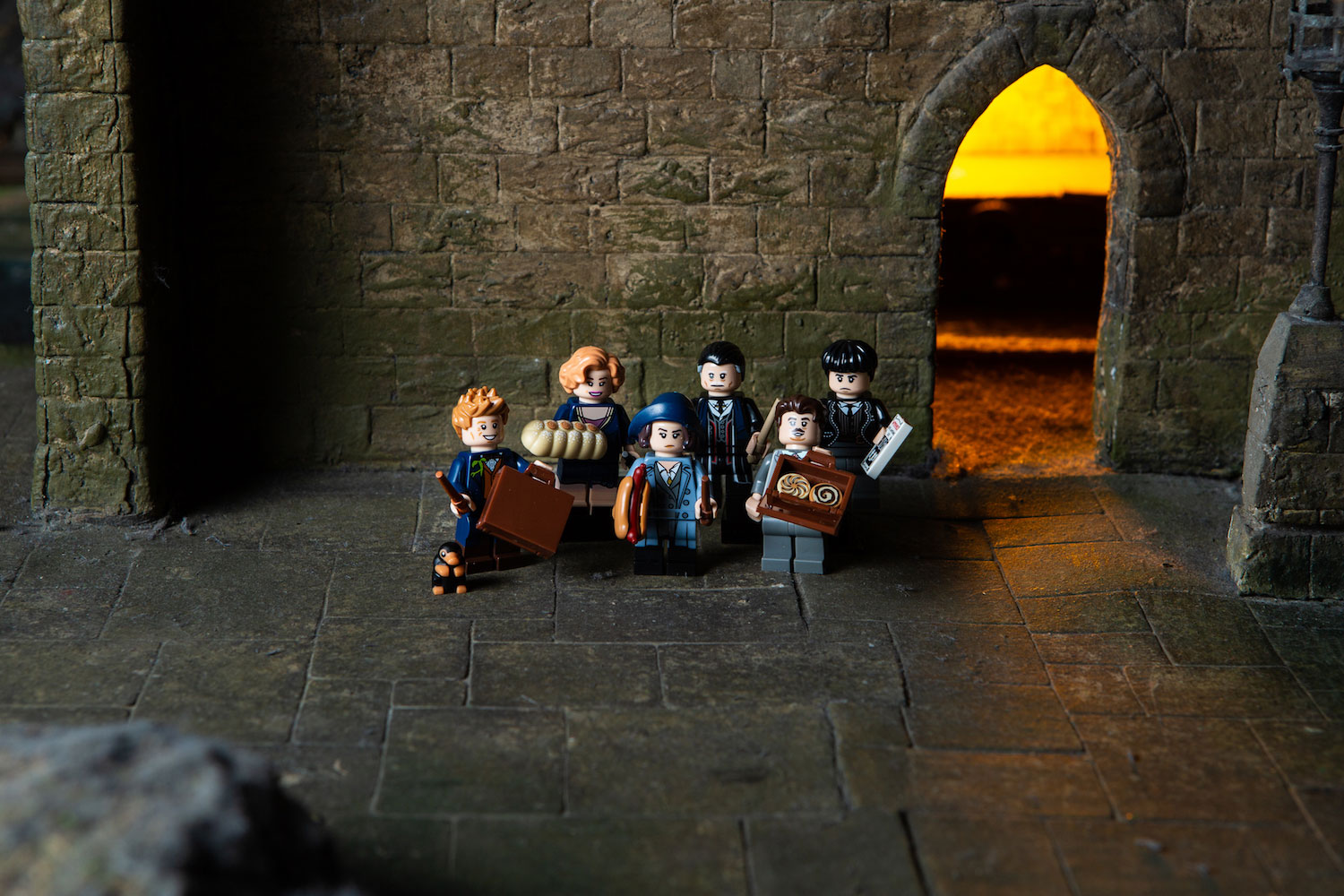 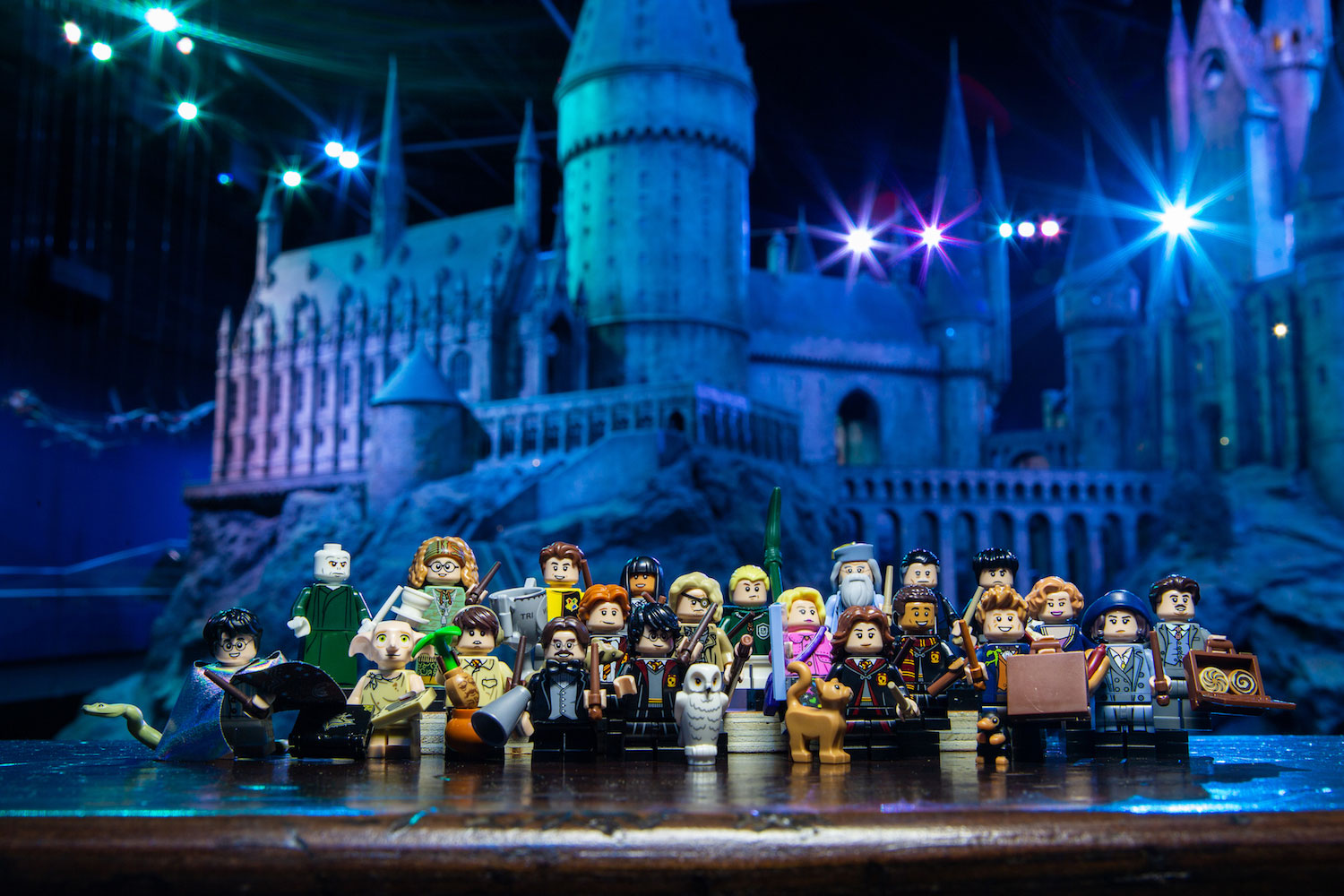 Worlds collide! The complete set of “Fantastic Beasts” and “Harry Potter” minifigures took a field trip together to the Studio Tour. 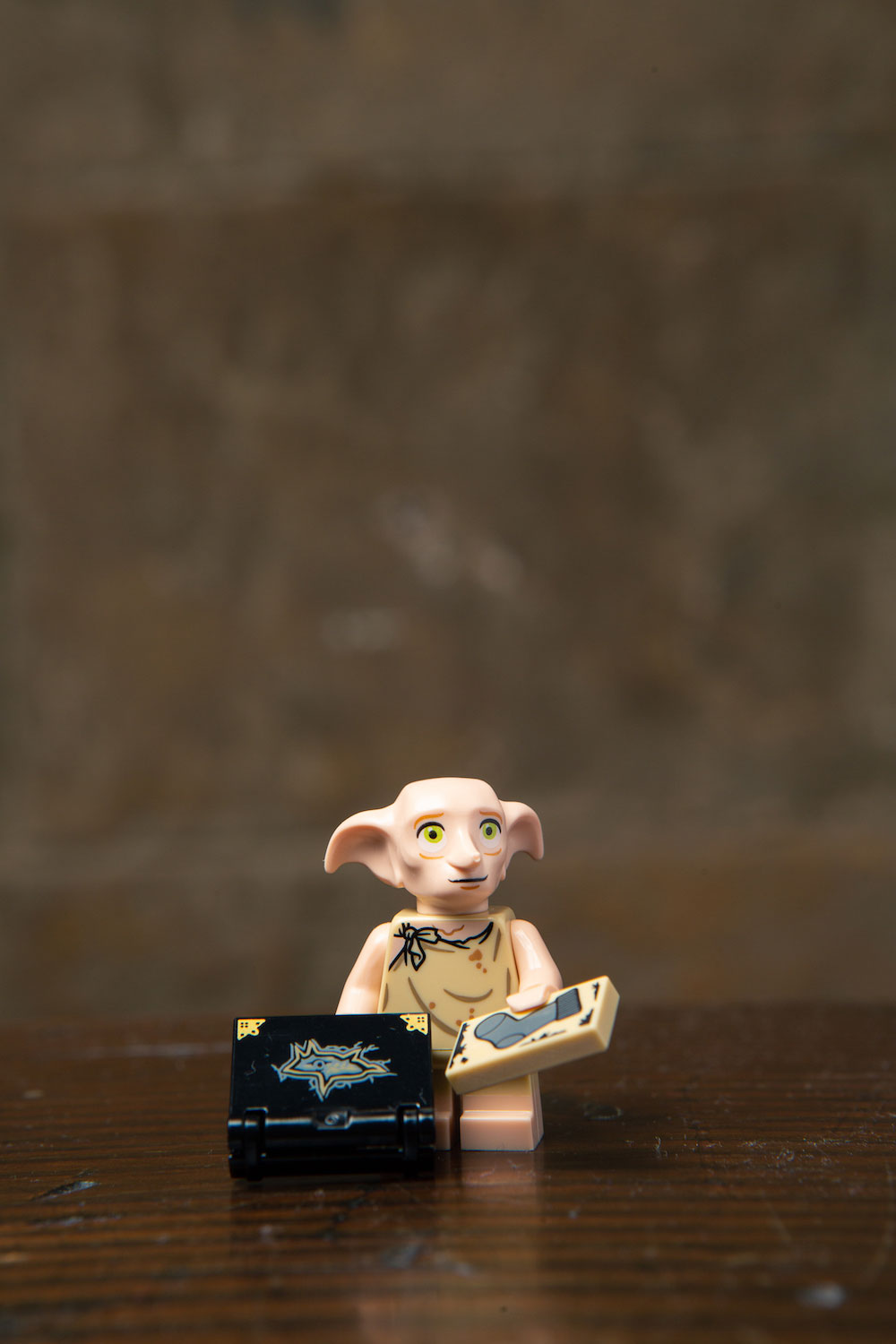 Is LEGO trying to break our hearts? Dobby’s minifigure includes a sock to pull from a destroyed Tom Riddle diary. 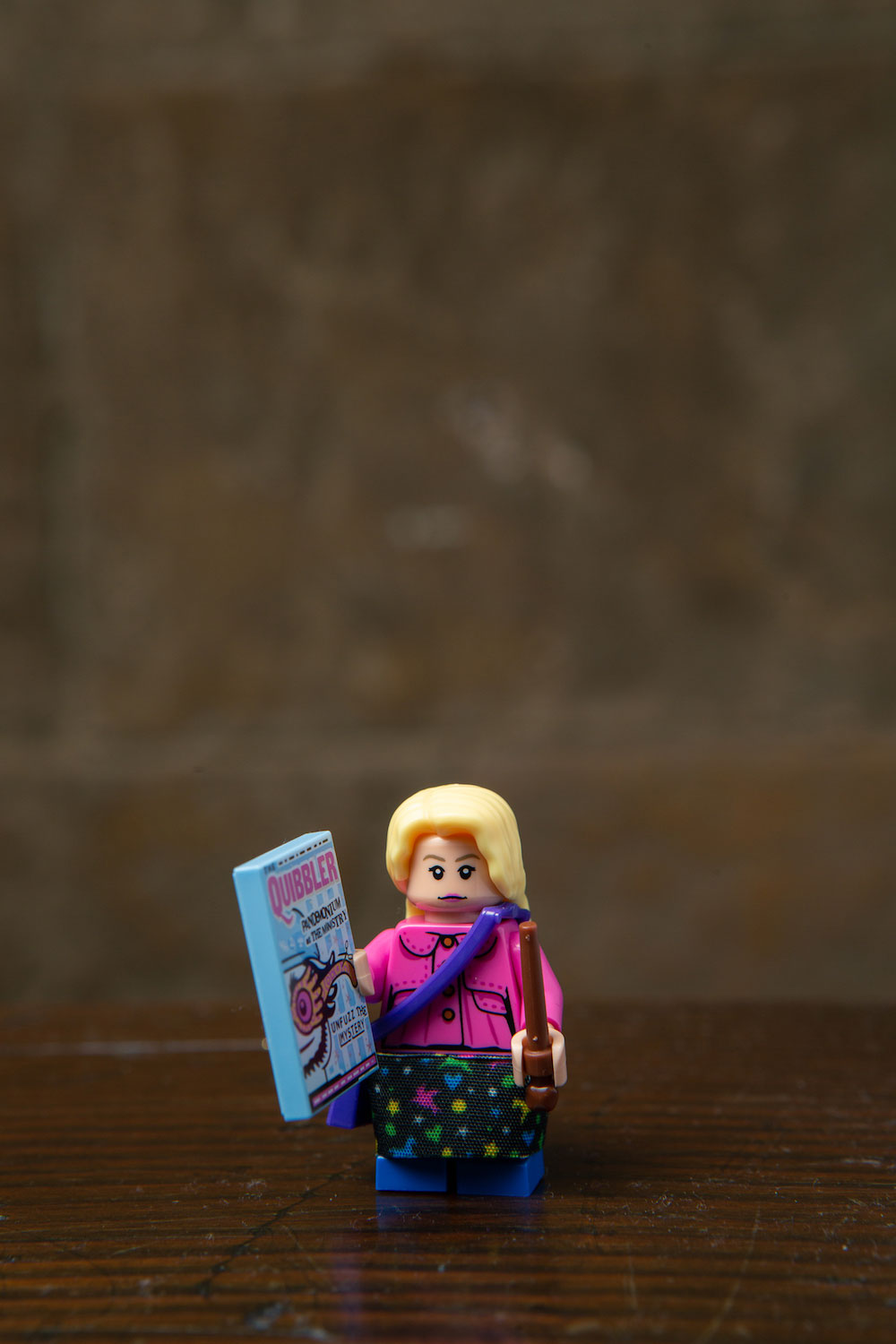 A classic Luna with her personal copy of the “Quibbler” is a delightful part of this new series. 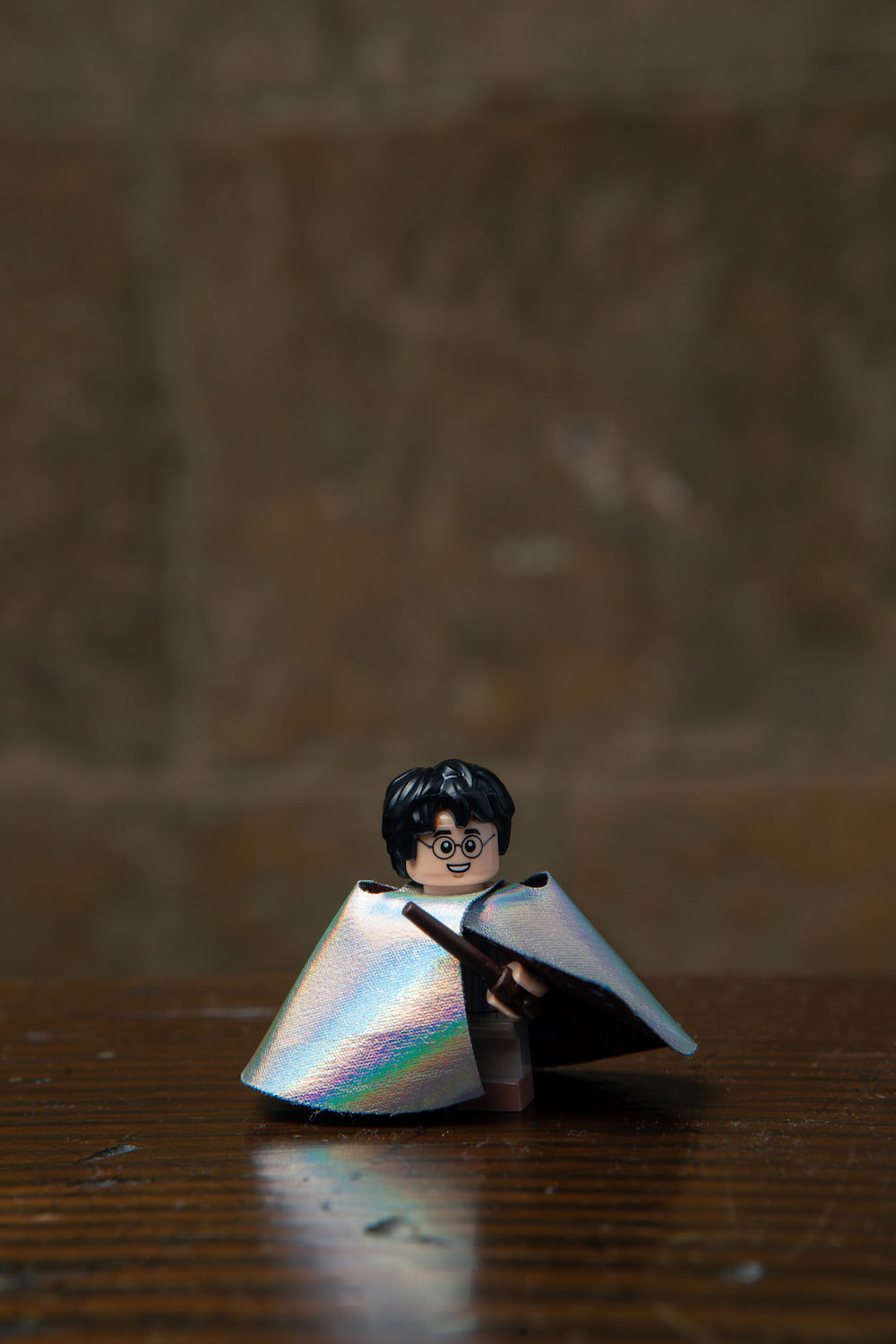 Harry is featured twice in the LEGO minifigures series (why not? He’s the title character) – in this case, in his PJs with his Invisibility Cloak. 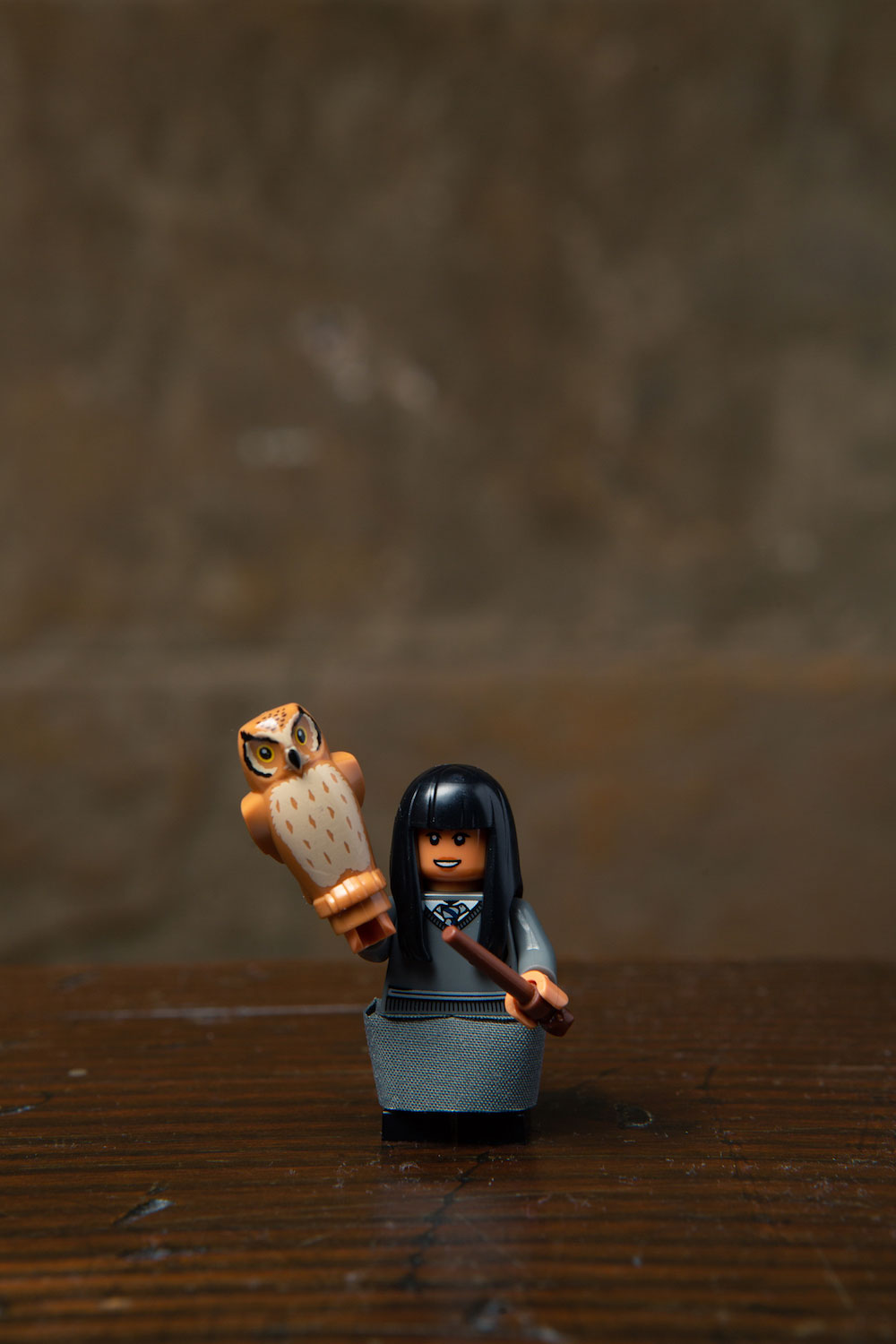 Cho Chang… and an owl? Well, Harry did ask her to go to the ball at the owlery… 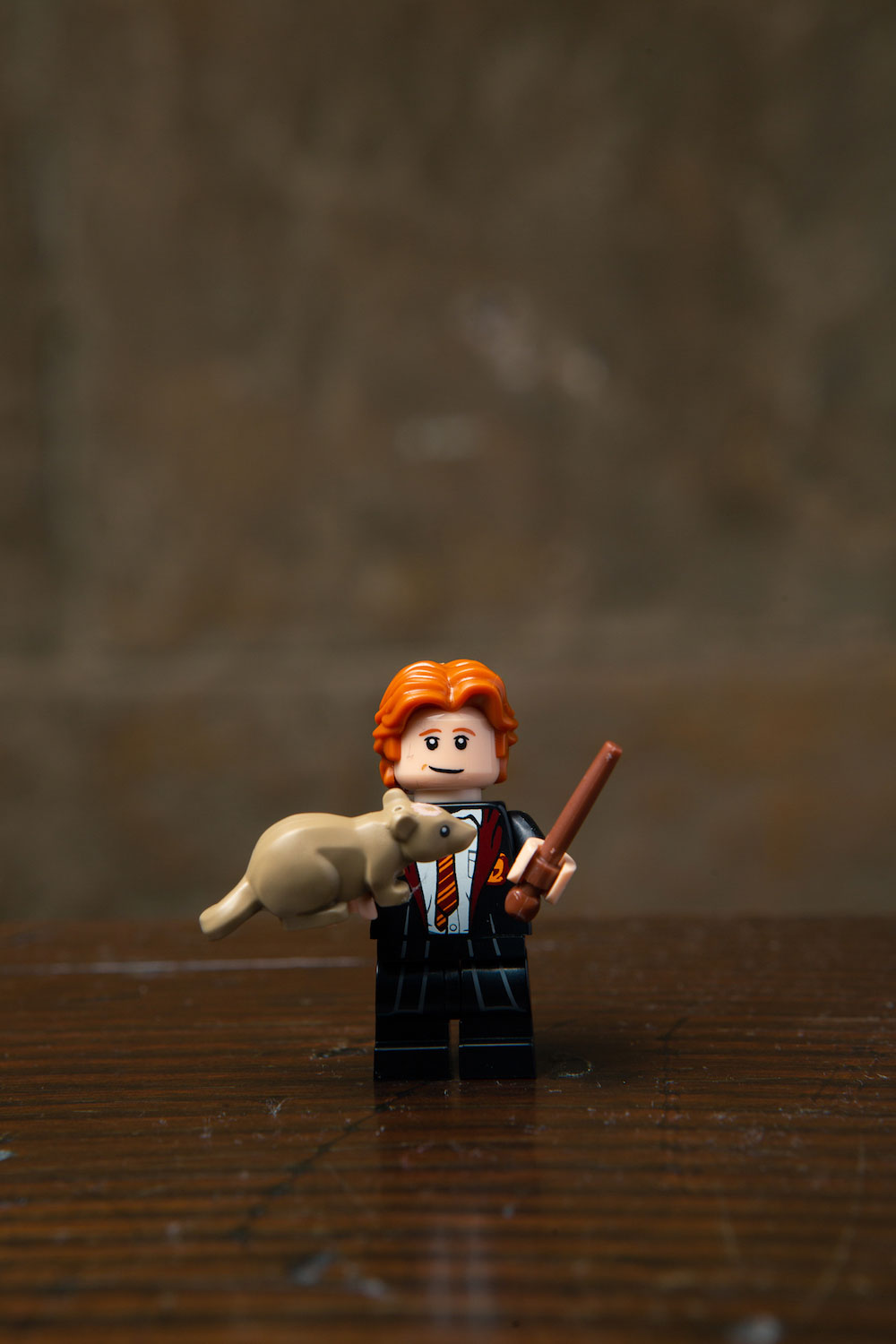 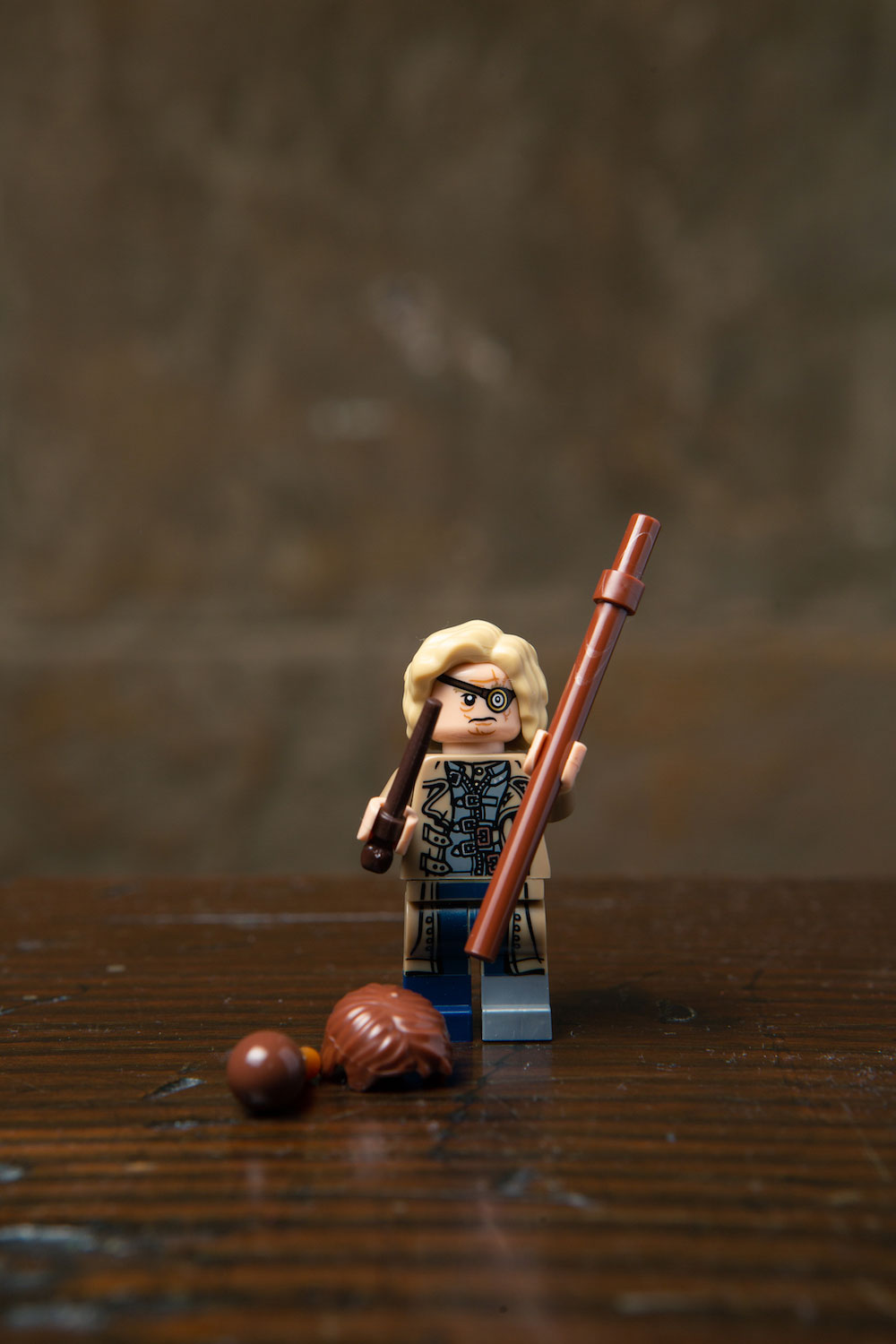 A couple of extra hair pieces included with Mad-Eye makes us question… Is it really Moody… or is it Barty Crouch, Jr. in disguise? 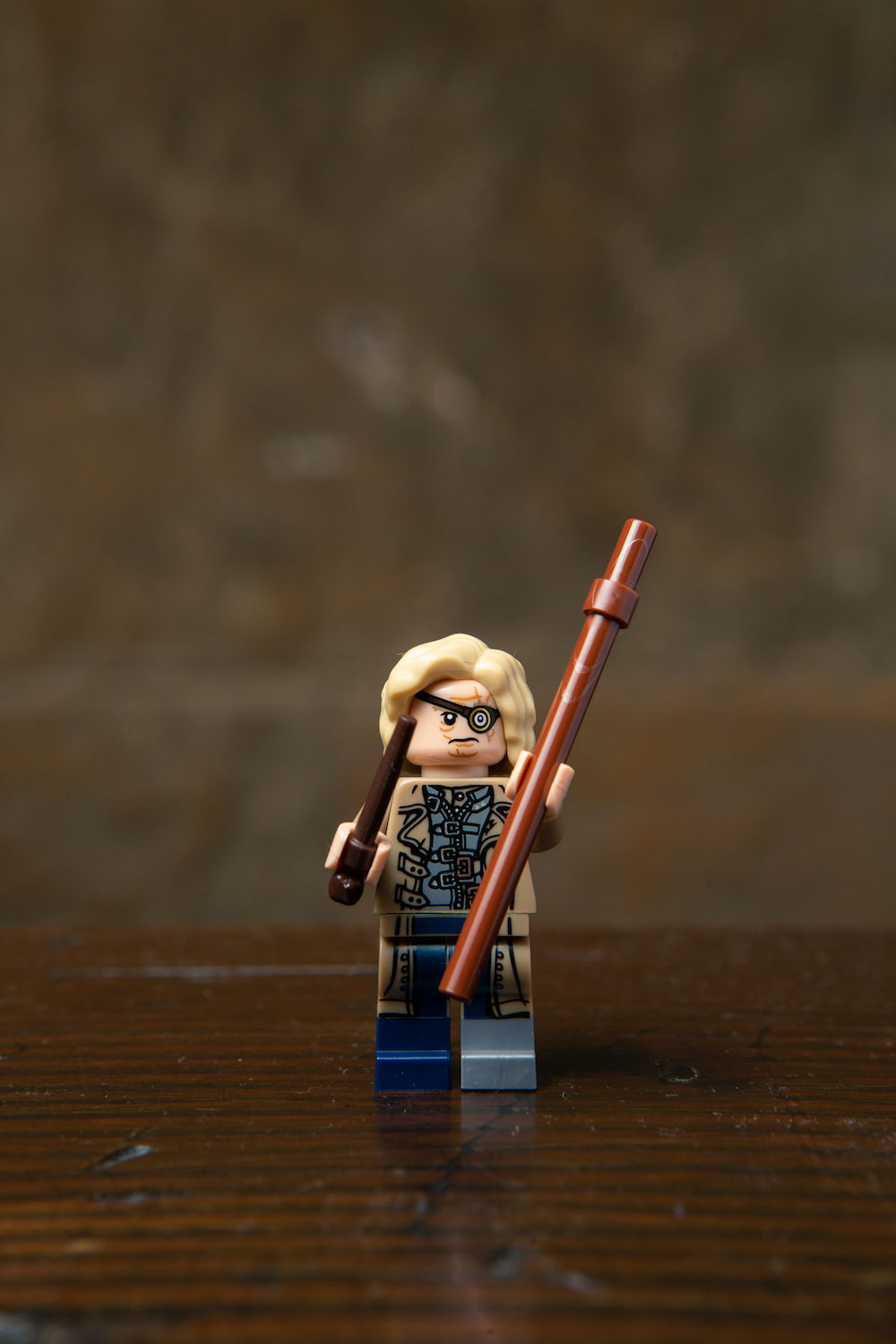 No Wizarding World Minifigures series would be complete without Mad-Eye Moody! 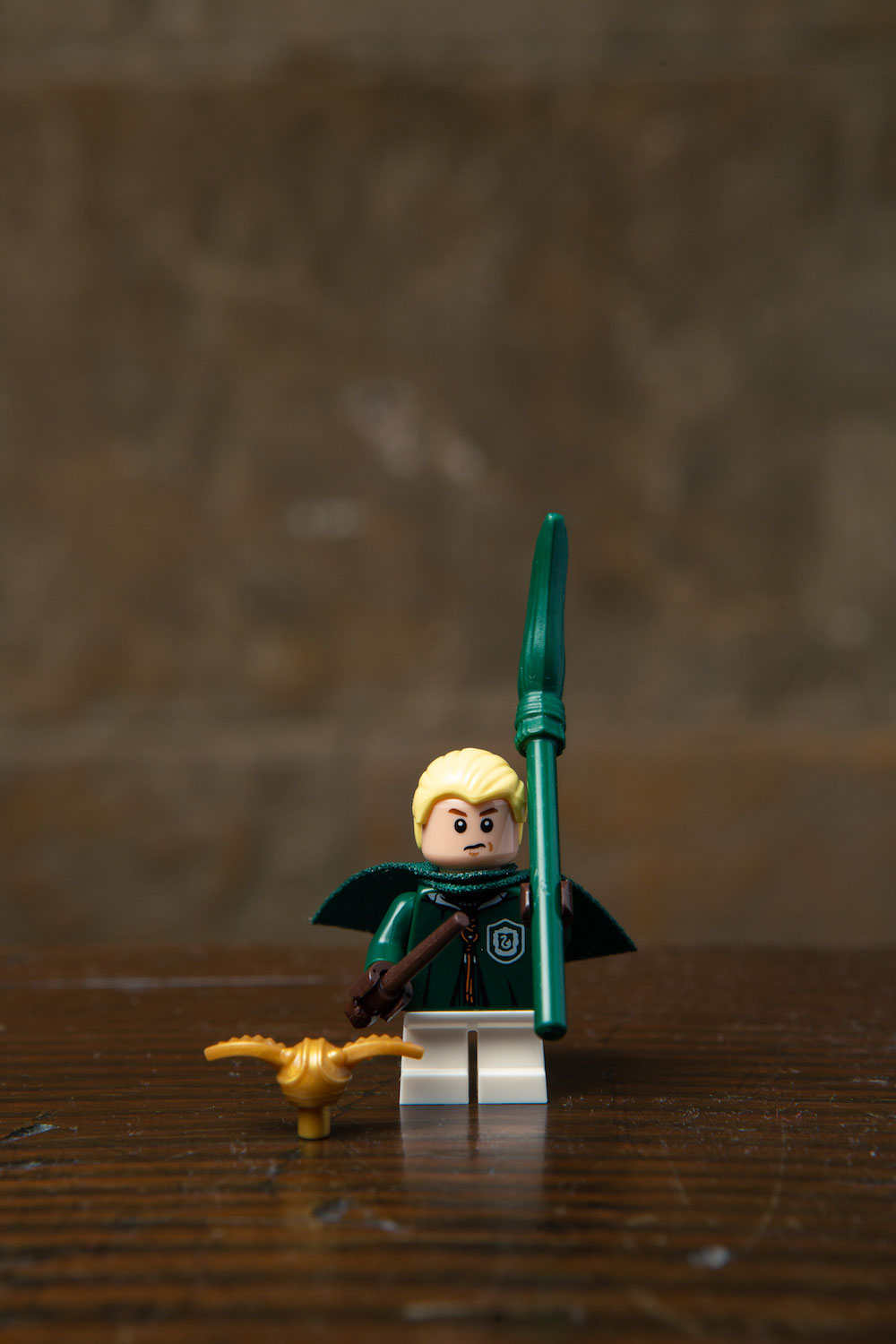 Draco’s LEGO minifigure is dressed in his Quidditch uniform and a matching green broomstick – all of which his father bought him, of course.

Credence’s LEGO minifigure includes one of his stepmother’s flyers (ugh, the heartache). 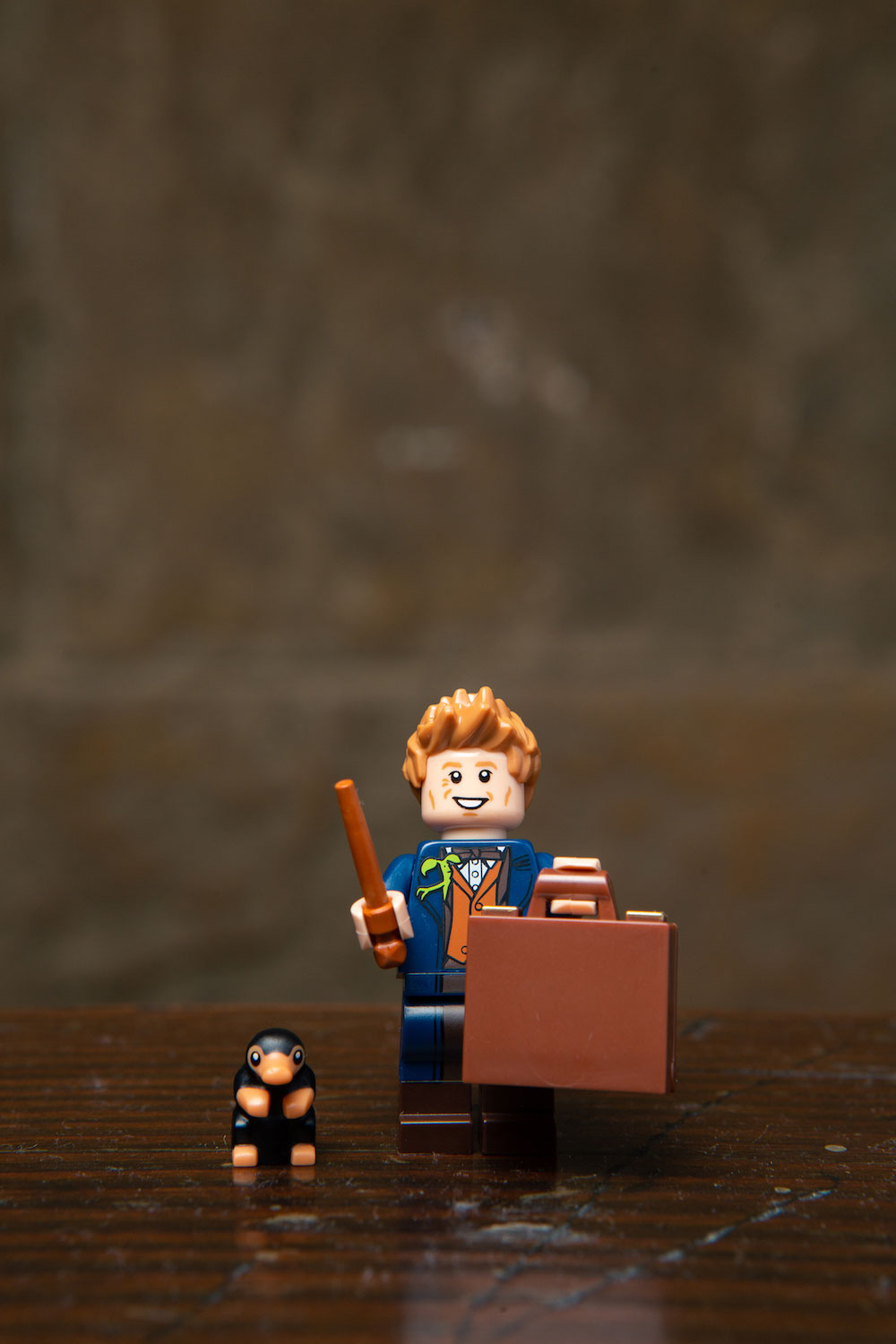 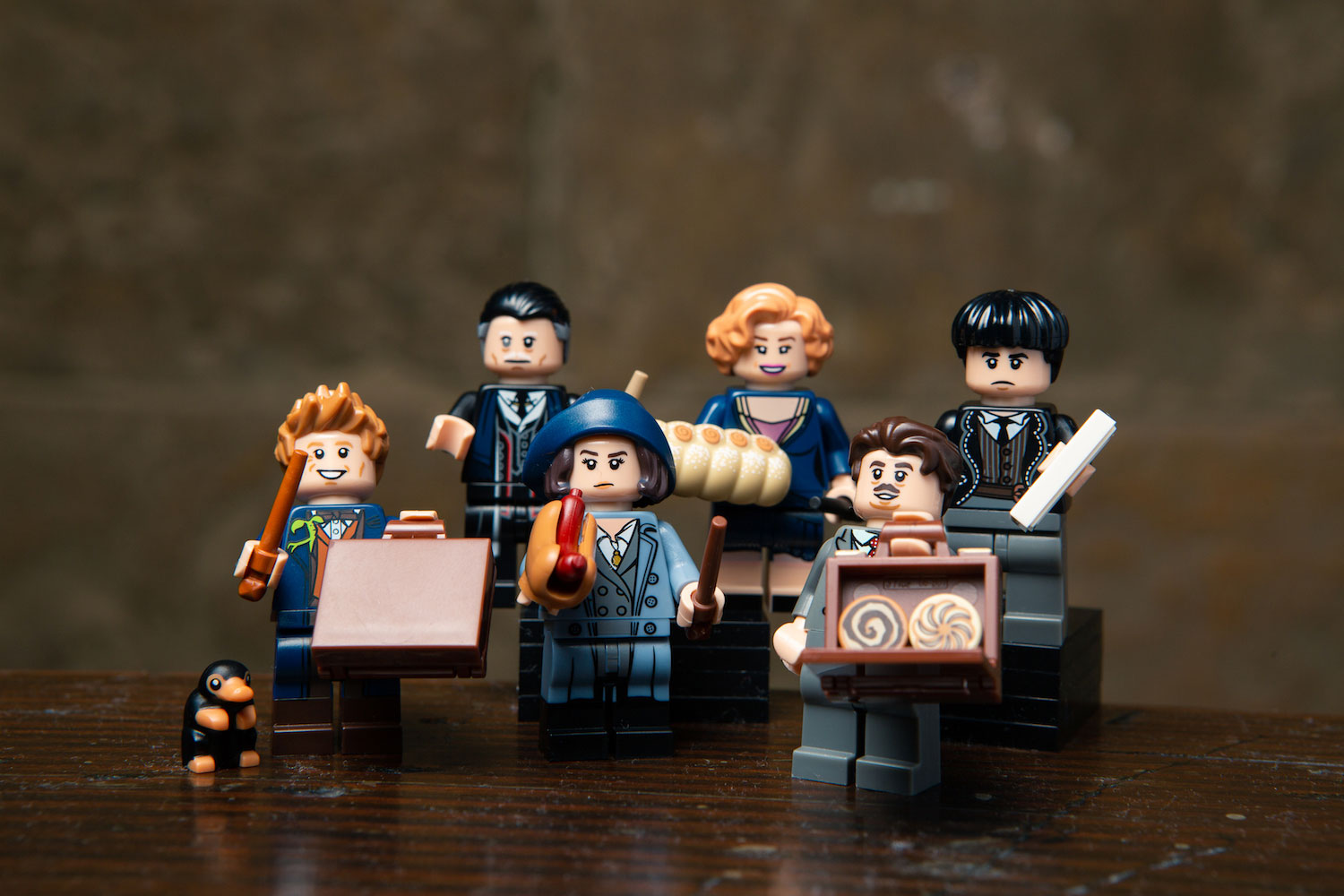 Tina and her hot dog, Queenie and her strudel, Jacob and his pastries… the whole “Fantastic Beasts” gang is included in the new wizarding world minifigures series from LEGO. 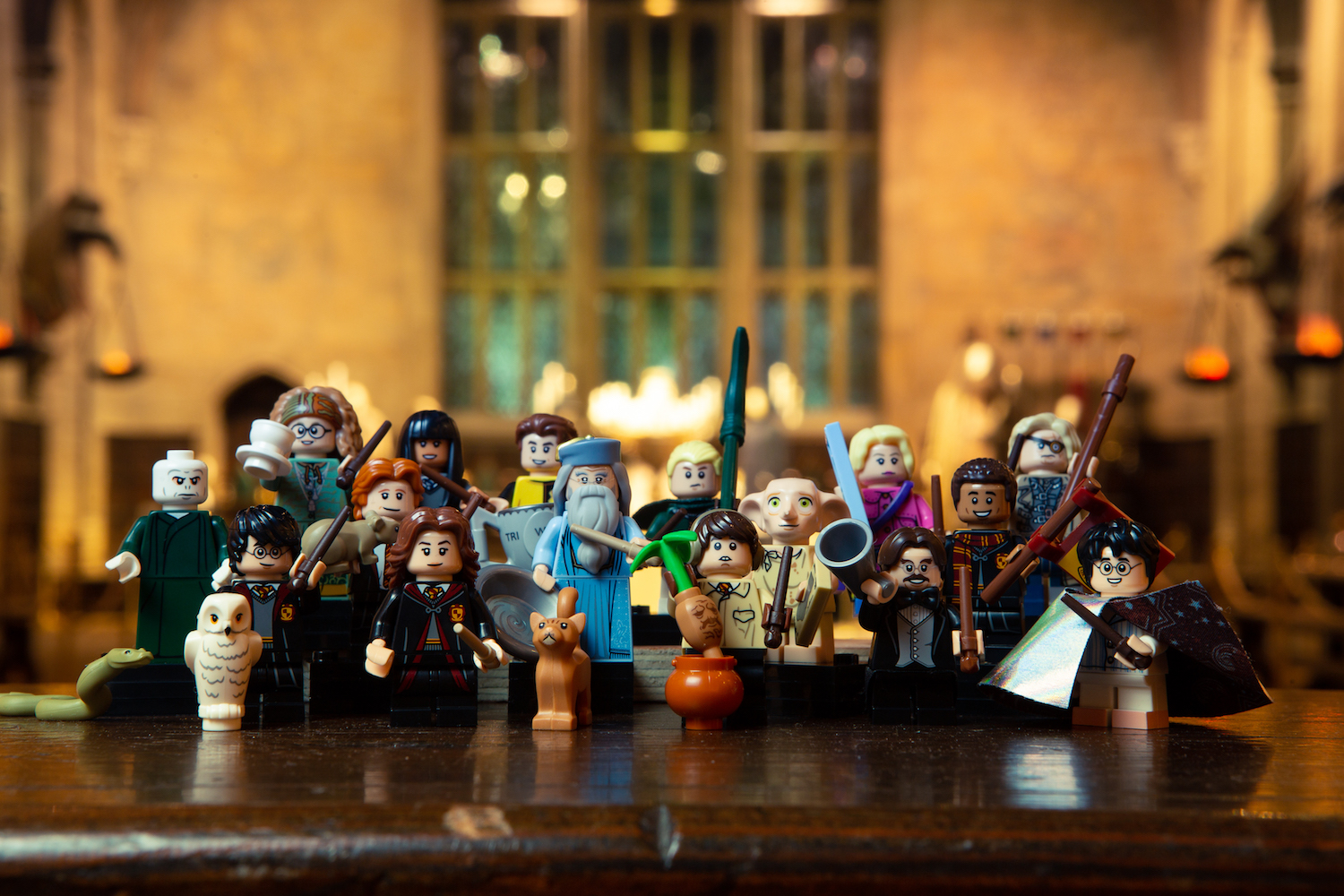 Iconic “Harry Potter” characters from the new LEGO minifigures series are featured together with a Great Hall backdrop.
Press Release

Newt Scamander - As a Magizoologist and author of the book Fantastic Beasts and Where to Find Them, Newt Scamander studies magical creatures and educates the Wizarding World about why they are important.

Jacob Kowalski – Jacob Kowalski’s chance encounter with Newt Scamander introduces him to the Wizarding World and takes him on an adventure beyond his wildest dreams.

Tina Goldstein – Tina Goldstein is a smart and determined witch who works for MACUSA (Magical Congress of the United States of America) as an Auror investigating wizarding crimes.

Credence Barebone – Credence Barebone, a troubled young man with a deeply powerful secret, struggles between his mother’s fanatical teachings and his longing for the freedom of the forbidden Wizarding World.

Percival Graves – The Director of Magical Security at the Magical Congress of the United States, Percival Graves is a respected law-enforcing Auror with a mysterious connection to an infamous Dark wizard.

Luna Lovegood – A unique Ravenclaw student at Hogwarts School of Witchcraft and Wizardry, Luna Lovegood is known for her dreamy behavior and quirky outlook on life.

Neville Longbottom – Neville Longbottom, an earnest Gryffindor student at Hogwarts School of Witchcraft and Wizardry, exhibits a deep reserve of courage despite being prone to mishaps and the victim of pranks.

Cho Chang - Cho Chang is the Seeker on the Ravenclaw Quidditch team at Hogwarts School of Witchcraft and Wizardry and a brave member of Dumbledore’s Army.

Dean Thomas – Dean Thomas, a Chaser on the Gryffindor Quidditch team at Hogwarts School of Witchcraft and Wizardry, is new to the Wizarding World having been raised by Muggles before discovering his magical heritage.

Lord Voldemort – Obsessed with achieving great power and immortality, Dark wizard Lord Voldemort recruited an army of like-minded wizards and evil creatures to serve him in conquering the Wizarding World.

Dobby – A true and loyal friend, Dobby the house-elf disobeys the Malfoy family, his owners, to protect Harry Potter.

Cedric Diggory – The talented, well-liked, and athletic captain of the Hufflepuff Quidditch team, Cedric Diggory is selected alongside Harry Potter as the Hogwarts champion in the dangerous Triwizard Tournament.

Mad-Eye Moody – Alastor “Mad-Eye” Moody is a famous law-enforcing Auror and member of the Order of the Phoenix. At Hogwarts, Mad-Eye becomes the Defense Against the Dark Arts professor.

Professor Flitwick – Small in stature but great in intelligence, Professor Flitwick, Head of Ravenclaw House and Charms Master at Hogwarts School of Witchcraft and Wizardry, is known for being a fair teacher with a good sense of humor.

Professor Trelawney –Sybill Trelawney is the Professor of Divination at Hogwarts School of Witchcraft and Wizardry and a talented Seer with the magical ability to predict the future.

Albus Dumbledore – Beloved Headmaster of Hogwarts School of Witchcraft and Wizardry, Albus Dumbledore is considered to be one of the most powerful wizards of all time and is a kind and wise mentor to Harry Potter.

Harry Potter in School Robes – A Gryffindor student at Hogwarts School of Witchcraft and Wizardry, Harry Potter is accompanied by his pet snowy owl Hedwig and is a skilled wizard and true force for good in the Wizarding World.

Ron Weasley in School Robes – One of Harry Potter’s best friends, Ron Weasley is part of a large family of witches and wizards from which he inherited his unusual pet rat Scabbers.

Hermione Granger in School Robes – Raised by Muggles, Hermione Granger is determined to become the best witch she can be by using hard work and intellect. She is best friends with Harry Potter and Ron Weasley and is accompanied by her pet cat Crookshanks.

Draco Malfoy in Quidditch Robes – The spoiled, snooty son of a long line of witches and wizards, Draco Malfoy has a well-known rivalry with classmate Harry Potter both on and off the Quidditch field.

Harry Potter in Pajamas – Harry Potter receives an Invisibility Cloak as a surprise Christmas present during his first year at Hogwarts School of Witchcraft and Wizardry.