The latest adaptation of Jane Austen’s Emma recently came out. This new film stars Harry Potter alums including Bill Nighy and Callum Turner. While I was watching, I couldn’t help but wonder which Hogwarts Houses some of these characters would be in.

Although she might have the best intentions, Emma is manipulative, cunning, and quite shallow. She involves herself in other people’s lives to try to get them to do what she thinks is best. If she had let Harriet pick her own suitor, she would have saved Harriet and Robert Martin the pain they experienced during their separation and Philip Elton the humiliation he endured when Emma was pushing Harriet toward him.

George was the only one who called out Emma when she did something wrong. He rightly put her in her place when she hurt Miss Bates and defended Harriet and Robert’s relationship. He is also incredibly kind to others, particularly when he was there for Harriet at the dance when Elton shunned her and when he selflessly gave up his house to live with Emma and her father after their wedding.

Harriet is a loyal and trusting friend to Emma. Unfortunately, in her attempt to live up to everything Emma encouraged her to be, she ends up rejecting Robert and hurting herself in the process.

Mr. Woodhouse is known for his friendliness and attachment to his family. He struggled with losing his daughter and Mrs. Weston when they got married. However, he has a good heart and did what he could to ensure his daughter’s happiness. 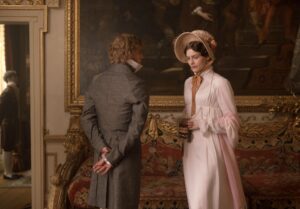 Although introduced as Emma’s rival, her accomplishments and intelligence are highly praised and sought after, traits that would have placed her in Ravenclaw.

One of the main characteristics of a Hufflepuff is their loyalty, which is something Miss Bates has plenty of.

Frank might have been handsome and wealthy, but he acted selfishly and deceived the people around him into thinking he was interested in Emma when he was really engaged to Jane Fairfax.

Not much is known about him except for his job as a farmer and his kind nature. He demonstrated this when he quickly forgave Harriet for her rejection and Emma for her manipulation.

Philip Elton is a very proud man who did not take well to being rejected. After his marriage, he became conceited and cruel to others.

Slytherins tend to be cunning and ambitious, traits that Mrs. Elton possesses.

As Emma’s former governess, she must have been incredibly intelligent: a characteristic Ravenclaw is renowned for.

Just like the other Hufflepuffs, he is kind and caring to his wife and friends. Throughout the film, he did what he could to do his best by everyone.

Do you agree with my Sorting? Let us know in the comments!