Video games may not work at Hogwarts, but they’ve given Muggle gamers a way to experience the magic of Harry Potter. There are numerous consoles on which to revisit the movies, ranging from the Game Boy Color to PlayStation 5 and Xbox Series X/S. And while many of the earlier mobile games are no longer accessible, the newer mobile games provide unique and exciting ways to enjoy the wizarding world on the go. 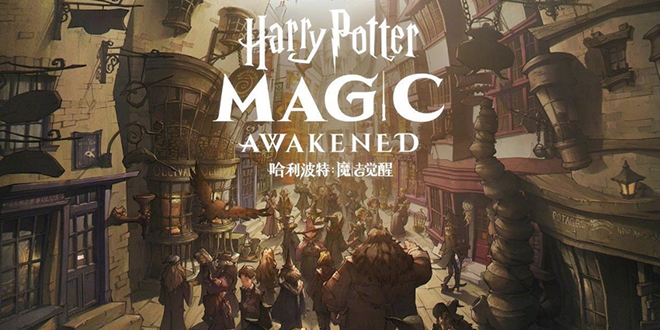 Officially announced on October 30, 2019, the game was codeveloped by Warner Bros. and Chinese gaming company NetEase and released under Warner Bros.' Portkey Games label. The game was released on September 9, 2021, in China, Hong Kong, Macau, and Taiwan. The global release has been pushed back to 2023, and preregistration is currently open for Indonesia, Japan, Malaysia, the Philippines, Singapore, South Korea, and Thailand in addition to the Americas, Europe, and Oceania. 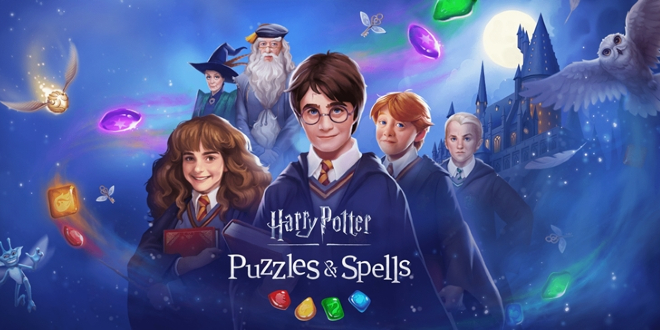 Zynga entered the Wizarding World on March 5, 2020, with the announcement of its new game, Harry Potter: Puzzles & Spells. It was launched worldwide for Android and iOS devices, Amazon Kindle, and Facebook on September 23, 2020.

Created alongside Warner Bros. Interactive Entertainment under the Portkey Games label, this match-three puzzle game is a first for the Harry Potter franchise and features characters, settings, spells, and more from the wizarding world. Additionally, players are able to shape their gameplay experiences by unlocking new spells and potions as they advance through the game. 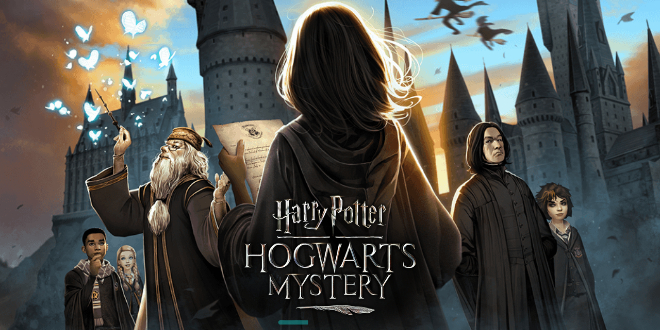 Harry Potter: Hogwarts Mystery is a mobile narrative role-playing game set in 1984–1991 at Hogwarts. The app was developed through a partnership with Warner Bros. and Jam City and released on April 25, 2018. It is free to download.

Players are able to create their own unique characters with the opportunity to customize further using in-app currency and gems. Starting as a student in Year 1, players choose a House, attend classes taught by Hogwarts professors, and progress through their years at Hogwarts. Players choose their own responses to in-app characters that can ultimately change the course of the game. Each lesson and side quest requires a certain amount of stars that can be gained by tapping on highlighted items. Each task then requires energy to be completed. Once a player's energy bar is depleted, they must wait four minutes per lightning bolt of energy to regenerate or else spend gems to replenish their energy immediately. 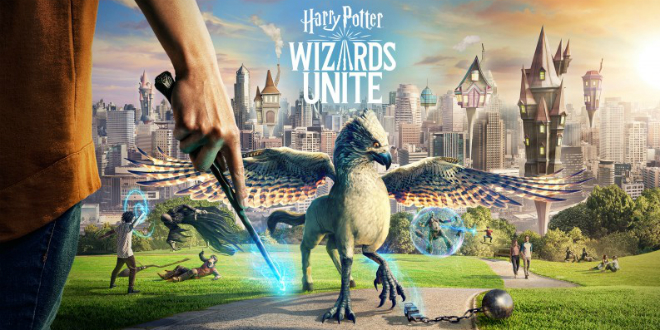 Announced in November 2017, Harry Potter: Wizards Unite was a mobile augmented reality game developed by Niantic, Inc. – the developer of Pokémon Go – and Warner Bros. Interactive Entertainment’s Portkey Games. The game was officially released on July 21, 2019, for Android and iOS devices and was free to download.

The main idea of the game was for players to locate and address magical occurrences to keep Muggles from learning the truth about the wizarding world. After creating an avatar, choosing a wand and Hogwarts House, and selecting a profession, players were able to “go on adventures, learn and cast spells, discover mysterious artifacts, and encounter legendary beasts and iconic characters,” all with the real-life magic of augmented reality. 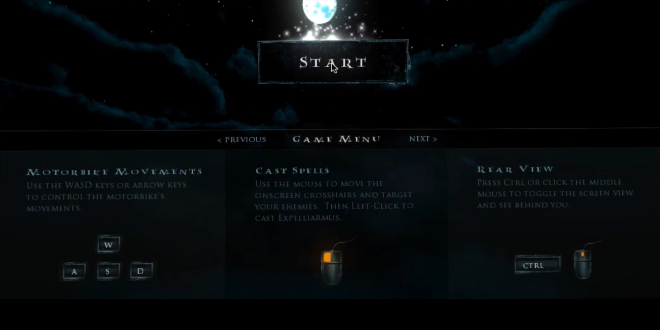 Harry Potter and the Deathly Hallows: Motorbike Escape was a free online video game released by Warner Bros. in November 2010, before the release of Deathly Hallows - Part 1. In the game, you play as Harry Potter flying alongside Hagrid to the Burrow on Sirius Black's enchanted motorbike. You cast spells against the Death Eaters, much like in the film and book when the Death Eaters attack in the chapter "The Seven Potters."

The player can use Essence of Dittany to gain an extra life and Dragon Fire to fly faster. They may also target opponents with the Disarming Charm (Expelliarmus) and dodge spells from Death Eaters. Successful hits can score anywhere from 50 to 500 points, and players could post their scores to Facebook. You can still play the game here. Reviews of the game were fairly positive, especially as a marketing strategy for the film. 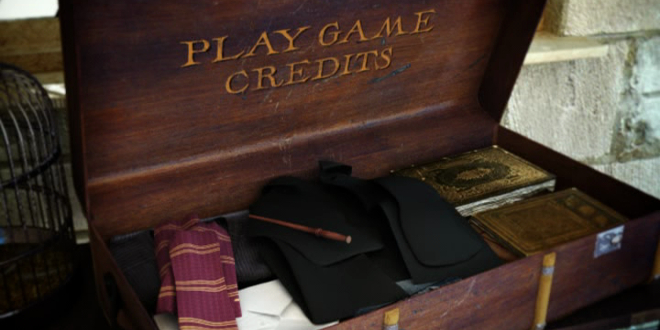 Harry Potter DVD Game: Wizarding World is a DVD game based on the Harry Potter series released by Warner Bros. on December 1, 2009. It is a sequel to the Hogwarts Challenge game. The player attends Years 4–6 of Hogwarts and engages in activities that incorporate elements from those films. It features classroom gameplay and activities that take place outside of Hogwarts.

The player must successfully complete the activities associated with a particular year before moving on to the next. Each gameplay activity is set up through establishing clips from the films, with narration. Up to four players can participate, and the first player to complete each activity for all three years will be allowed to play a bonus activity and will win the game. 14 activities are featured in this game. The game had more positive reviews than its predecessor. 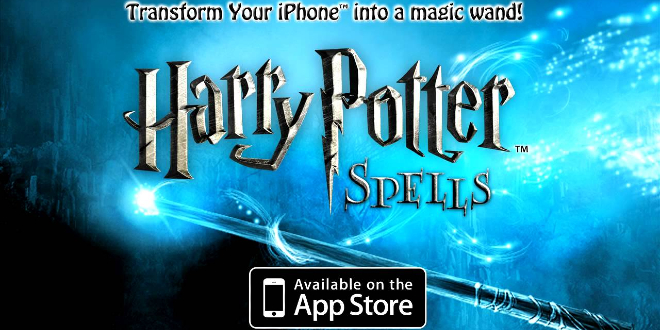 Harry Potter: Spells is an iPod game published on the Apple App store on November 15, 2009. The player is invited to Hogwarts, gets a wand, and is Sorted into one of the four Houses by the Sorting Hat. There are 23 spells to learn in three different difficulty levels. If you do the spells right, you earn House points. If you learn enough spells, you can participate in an online wizard duel. 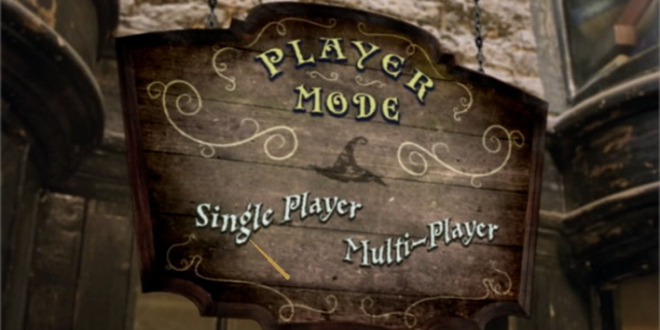 Harry Potter Interactive DVD Game: Hogwarts Challenge is a DVD game where the player attends Years 1–3 of Hogwarts. It was released on December 11, 2007, and was followed by a sequel. It was developed by Warner Bros. and published by Scope Seven. Your remote control acts like your magic wand, and there are bonus clips from the Goblet of Fire and Order of the Phoenix films.

One to four players can participate, each choosing their skill level. You master tasks, collect House points, and win Quidditch World Cup tickets. Challenges include moving staircases, the Whomping Willow, and wizard duels. Jim Dale, the voice of the US audiobooks, acts as the narrator. The game had very negative reviews. 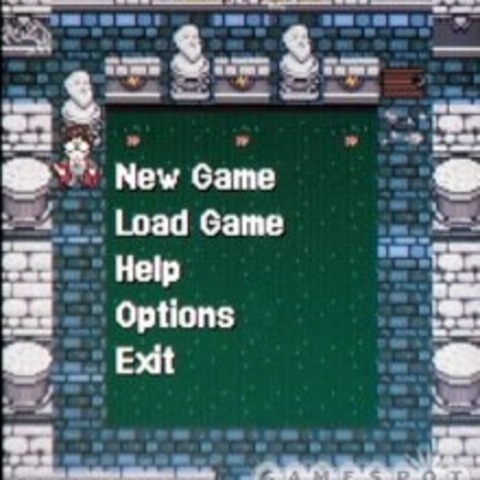 Harry Potter: Find Scabbers is an old mobile game from 2005 where you had to catch Scabbers, Ron Weasley's pet rat, and Peter Pettigrew in disguise. There are also several enemies like Dementors and spiders. The rat scrambled around a series of mazes that are full of locked doors and beasts. In order to get through the door, Harry needed to scoop up keys that correspond with the desired door. The beasts could be frozen with a blast from the wand. You could also collect Bertie Botts Every Flavor Beans. Reviews of this game were negative.