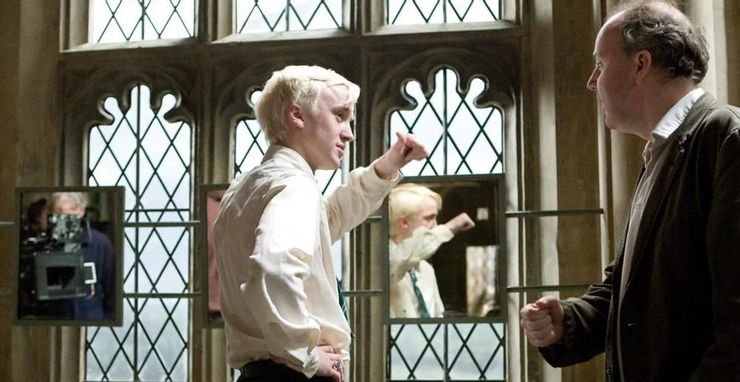 Man: “Are you good?”
Draco: (having 31 minutes of screen time throughout the whole series) “Yeah, I’m good.”
—Lawrilie

Draco: “You see that person in the mirror? That’s me! Dark Magic if I’ve ever seen it.”
—Lacy

David Yates: “Tom, you’ve been playing this role for years now, and you’re still doing it wrong. Look at my hand. This is how you hold your wand.”
—Brett

Tom Felton: “You’re trying to give me acting tips? Has your cheese slid off its cracker?”
—Friend of Fawkes

Draco: “How about we settle this with a thumb war?”
—Neil

Man: “And those are the eight simple rules for dating Pansy.”
Draco: “Yes, Mr. Parkinson.”
—Sam

Draco: “No mask? No social distancing? The door is over there, mate!”
—Harry

Draco: “No one’s behind, so can I cry peacefully?”
David Yates: (with his fingers crossed behind his back) “Yes.”
—Slytherin Princess

David: “I know how to make people hate Malfoy more. During your fight with Harry, he will be holding a puppy and you will have to hex it.”
—Liam

Tom: “You ever heard what wizards did before toilets?”
—Cody

Tom: “Now, you just extend your pinky on the other side, and that’s how you make the ‘hang loose’ sign.”
—Christen

Yates: “Have you seen Dan?”
Tom: “Yeah, he’s hiding in one of the stalls. I think he broke another wand.”
—Abby

And then, Draco finally noticed that Muggles had been filming his life for the past six years.
—Sam