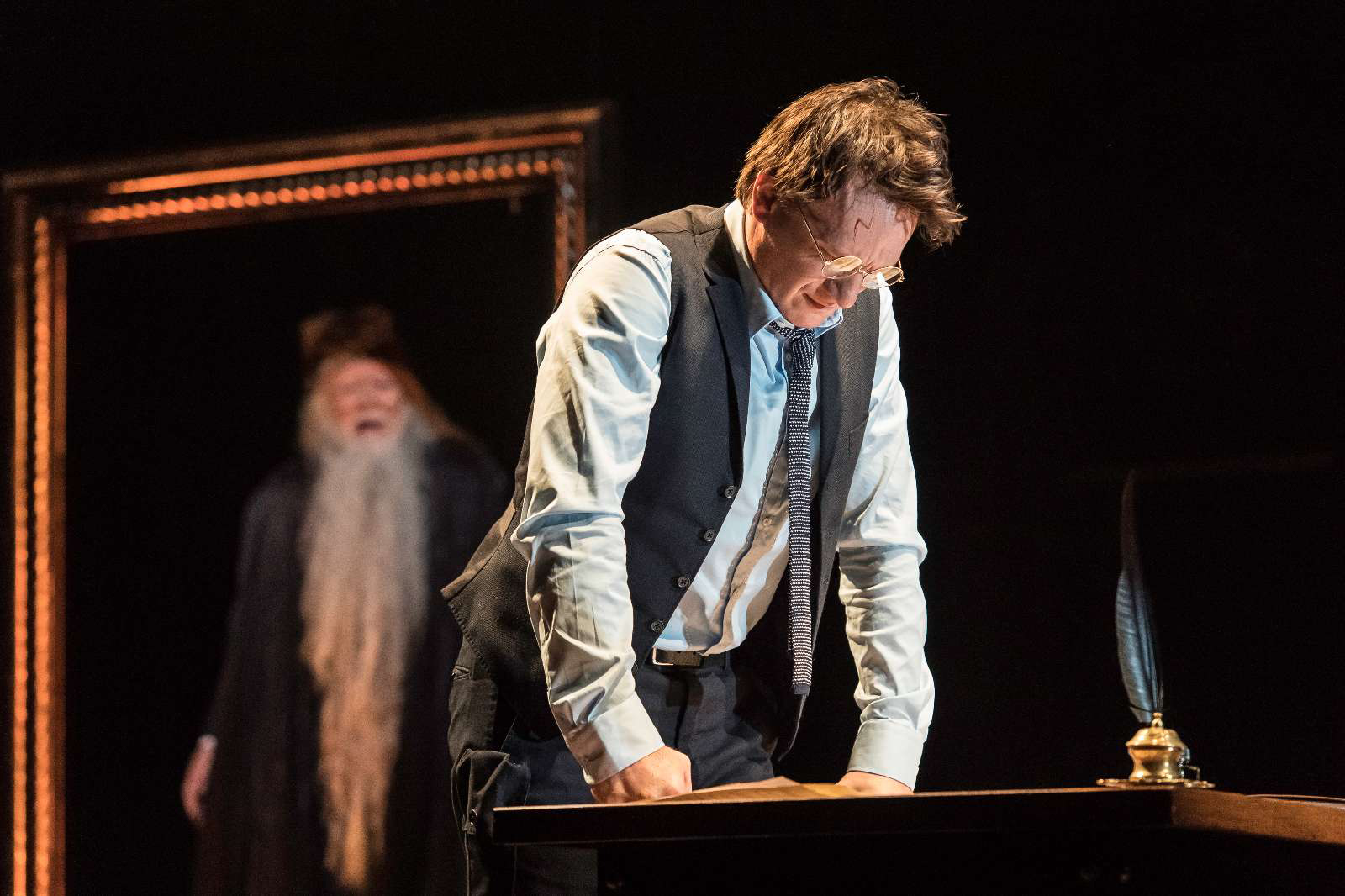 With Ginny pregnant again, Harry began looking for a baby name on his list of people who’d died.
—Sam

Dumbledore: “HELP ME. I’M STUCK IN THIS PAINTING. GET ME OUT!”
—Josh

Dumbledore: “Did you know house-elves can fly?”
Harry: “Really?!”
Dumbledore: “Gotcha!” (to the other headmasters) “I told you he’d believe anything I said.”
—Sirius

When you waste all your ink on drawing a scar on your forehead.
—Hagrid’s Helper

Harry: “Sir, please, it’s killing me inside. I need to know…. Where does ‘Brian’ come from?”
—Manuel

Harry: “I can’t believe he drew a moustache on my official portrait. My own son!”
Portrait of Dumbledore: “That’s hardly something to get worked up about. Restoring it is a simple process.”
Harry: “You don’t understand! He used permanent ink. It’ll never wash off, and now I’ll need to grow a moustache to match it.”
Portrait of Dumbledore: “Don’t you think you may be overreacting?”
Harry: “I’m not like you.” (punches the desk) “I look horrible with facial hair!”
—Troi

Dumbledore: “What does the letter say, Harry?”
Harry: “It reads, ‘Dear Mr. Potter, it is my pleasure to inform you that… you suck and I am a better wizard and father than you! Insulting you forevermore, Draco Malfoy.’ ”
—Bored

Dumbledore: “Need any help, Harry?”
Harry: “Not from someone who’s dead.”
Dumbledore: (gasps and walks out of frame, and Harry never sees Dumbledore ever again)
—Liam

Portrait Dumbledore: “Harry, I know there was so much I never told you, but to keep me in the dark like this is just cruel.”
Harry: “Okay, fine. J-Lo and Ben Affleck are back together.”
—Caitlin

Dumbledore: “I’m afraid for the calendar. Its days are numbered.”
Harry: “That’s it. No more dad jokes.” (goes and unplugs the portrait)
—Emma

Dumbledore: “All right, Harry, all you have to do is…” (freezes)
Harry: “Dumbledore? Oh, you’re frozen.” (puts a coin in the portrait slot)
Dumbledore: “…locate Albus and Scorpius and…”
—Sirius

Harry: “My Godric Gryffindor, where is Albus?”
Dumbledore: “Am I a joke to you?”
Harry: “Wrong Albus!”
Dumbledore: “Ah, yes. My bad.”
—Humble Hufflepuff

The portrait of Dumbledore tries to comfort Harry, who is furious about Rita Skeeter’s newest book, Harry Potter and the Cursed Child.
—Jack (Hufflepuff)

Harry: “Mirror, mirror on the wall, who is the fairest of them all?”
Dumbledore: “Draco Malfoy. You know that.”
Harry: “Damn it.”
—Jay

“It’s terrible, Professor. My son hates me, I’m a terrible father, and on top of all that, they got rid of Vine!”
—Bex

Harry: “I have something I need to confess…. I prefer Michael Gambon’s Dumbledore to Richard Harris’s.”
Dumbledore: (shocked)
—Catherine

Harry: “Hey, Dumbledore. Did you know that there are only two Fantastic Beasts caption contests? Crazy!”
—Sylvia