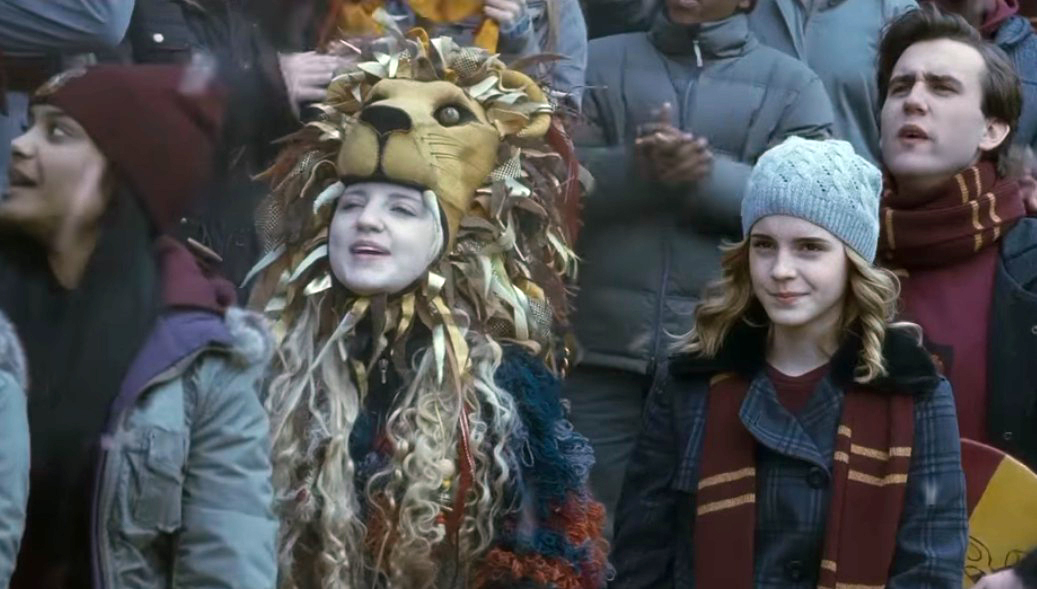 When everyone is cheering your boyfriend and you are just proud he hasn’t fallen off his broom yet.
—Me

Girl on the left: “There’s a rogue Bludger heading straight for us! If only someone had written a line for me so I could warn Luna and Hermione. Oh well!”
—Friend of Fawkes

No one noticed that a lion head had mysteriously come to life and was slowly chewing Luna’s head!
—Sylvia

Hermione: “Luna, I love your costume.”
Luna: “It’s not a costume. I miscast a Transfiguration spell and now I’m stuck as half a lion, half me.”
—Liam

When Padma’s embarrassed to be standing next to Luna so she pretends she doesn’t know her.
—Emma G.

When you are a bigger fan of Gryffindor than of your own House.
—Me

Luna: (singing) “Nants ingonyama bagithi baba!”
Luna: (thinking) “I don’t know what it means, but it feels right for a Quidditch match.”
—Friend of Fawkes

Luna: “I think Quidditch would be more interesting if they rode on Blibbering Humdingers instead of broomsticks, don’t you?”
Hermione: (forced smile)
—Sam

The Lion, the Witch, and the Guy Who Defeated the Boggart in the Wardrobe.
—Yuki

Hermione: “Who’s winning?”
Luna: “Gryffindor.”
Hermione: “Thanks, Aslan.”
Luna: “I’m not Aslan. That’s a different franchise.”
Hermione: “Is it, though? Only certain people get in. Kids learn fighting skills to fight a dark sorcerer who wants to rule the world. Creatures you wouldn’t expect to talk do. There’s a good leader who is all powerful. Why split hairs?”
—Josh

Luna: “So why am I standing between you and Padma?”
Hermione: “I’m still not okay with her going to the Yule Ball with Ron.”
—Mark

Neville: “My hair is getting ruined! How do you guys keep your hair nice?”
Hermione, Luna, and Parvati: “Hat!”
Neville: “Luna, you’re lying.”
Luna: “I know I’m lion.”
—Ming