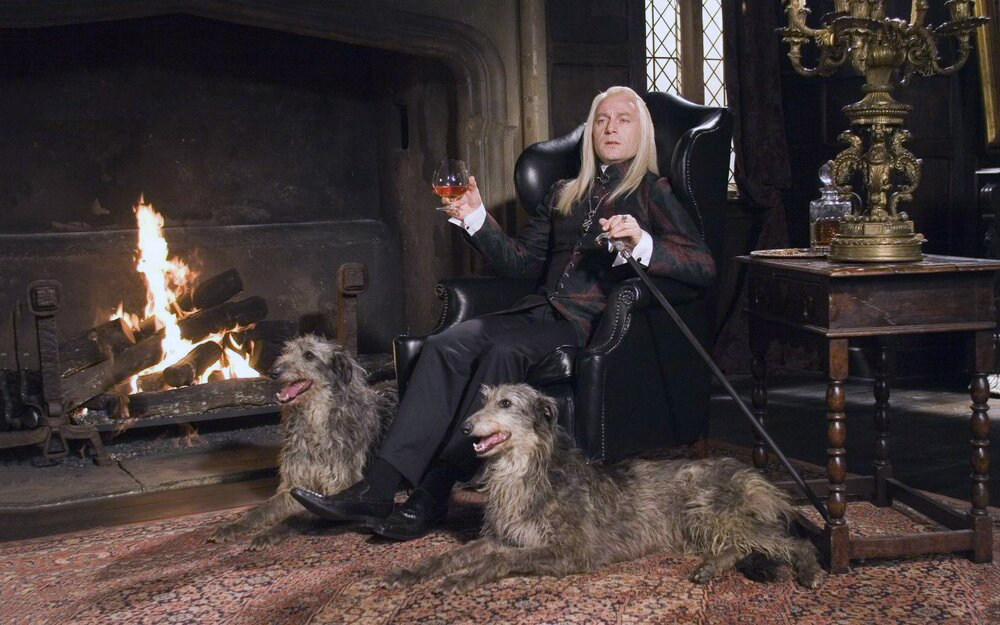 When you’re the fastest runner in first grade.
—Draco’s GF

“The Ghost of Christmas Past, you say? More like Ian McKellan in some hand-me-downs from a jumble sale.”
—Friend of Fawkes

“I didn’t even realize how sarcastic I was being. It’s starting to become a problem, I think.”
—Billie the Bard

“Turn My Swag On” by Soulja Boy plays.
—Branko

When your son is home for the holidays but won’t shut up about his nemesis so you have to open another bottle of emotional support whiskey.
—Sharon

“Excuse me. These are Scottish deerhounds. I specifically requested Irish wolfhounds for my portrait sitting!”
—Kim K.

Jason Isaacs: “I specifically asked for the Henri IV Dudognon Heritage Cognac Grande Champagne! Is it too much to ask to have the appropriate prop for this scene? Really?”
—Friend of Fawkes

Jason Isaacs: “This scene will be in the movie, of course.”
Director: “…Yep.”
—Sam

“‘Blackmail’ is such an ugly word. I prefer ‘extortion.’ The X makes it sound cool.”
—Larry L.

“Narcissa, what have you done with your hair?”
—Les C.

“And remember, if I get harsh with you, it is only because you’re doing it all wrong.”
—Lilith

“Unfortunately, due to several experiences in my youth, I cannot just ‘walk up and join a circle of people talking,’ but it does sound lovely, thank you.”
—Monty W.

“Draco, why are you wearing a Ravenclaw scarf?”
—Ron J.

Lucius Malfoy’s life became much more pleasant after he turned Narcissa and Draco into dogs.
—Sam

“One does not simply open the Chamber of Secrets; one gives an 11-year-old a secret diary instead.”
—Sophie