Quidditch Through the Ages

Released in March 2001, Quidditch Through the Ages is charmingly reproduced as if it were a copy from the Hogwarts School of Witchcraft and Wizardry library. It starts with the history of broomsticks, describes the evolution of Quidditch through the generations, and includes the rules of the game as well as a chapter on modern-day play.

When Severus Snape caught Harry outside the school with this book in Harry Potter and the Sorcerer’s Stone, he invented the rule that no library books were allowed outside the school and confiscated it. The book covers the following topics:

Rowling’s name does not appear on all the covers of the book. Some versions run under the pseudonym “Kennilworthy Whisp.” In the universe, Kennilworthy Whisp is a Quidditch expert and fanatic who has written many books about the sport. He lives in Nottinghamshire, where he divides his time with “wherever the Wigtown Wanderers are playing this week.” His hobbies include backgammon, vegetarian cookery, and collecting vintage broomsticks. The Firebolt is the best broomstick according to him.

The book benefits the charity Comic Relief. Over 80% of the cover price of each book sold goes directly to poor children in various places around the world. According to Comic Relief, sales from this book and its companion, Fantastic Beasts and Where to Find Them, have raised £15.7 million.

In March 2018, an audiobook version of the original Hogwarts Library book was first offered as a digital download. Read by Andrew Lincoln, an actor best known for starring in the TV show The Walking Dead, the audio version was then also made available on CDs. For more information, click here.

Information and Tidbits from the Book

The Quaffle is the ball with which Chasers score goals and due to the nature of the game, must be caught and thrown one-handed since the players have to control their broomstick simultaneously. The Bludger is a round, jet-black iron ball, 10 inches in diameter, that is hit by a Beater with a bat and attempts to unseat the nearest player, which is why Beaters attempt to knock Bludgers toward opposing players. The Golden Snitch is a very small ball in diameter with golden wings that allow for the ball to fly at a very fast speed, causing it to be extremely difficult to see and catch. The capture of the Snitch ends the game and gives the team whose Seeker caught it 150 points, which usually determines which team wins the game.

Quidditch falls under the jurisdiction of the Department of Magical Games and Sports, part of the Ministry of Magic. The professional organization is called the International Association of Quidditch. Professional matches are attended by trained mediwizards, and while there are many injuries, there are few deaths from Quidditch accidents. However, referees have been known to disappear completely only to turn up weeks later in the middle of the Sahara Desert. There are 700 possible ways to commit a foul in Quidditch, all of which occurred in a World Cup match held in 1473.

The name "Quidditch" comes from Queerditch Marsh, the place where the game originated in the 1000s.

There are three kinds in all. Four are used in the game.

Quaffle: Large and red, about the size of a soccer ball, used to score goals, worth 10 points.

Bludger: Two in a game, black, slightly smaller than a Quaffle, fly around trying to knock players off brooms.

Snitch: Tiny, the size of a golf ball with wings, very fast and hard to catch, the most important ball in the game.

Seven play at one time for each team.

Chaser: Throws the Quaffle to the other Chasers trying to score goals. Three on each team.

Keeper: Kind of like a soccer goalie. Guards the goal posts. One on each team.

Beater: Uses a baseball-like bat to knock the Bludgers at the other team. Two on each team.

Seeker: Flies around trying to catch the Golden Snitch, scoring 150 points if caught. One on each team.

Each goal scored by Chasers is 10 points.

Penalty shots are given when you get fouled.

Rules are of course 'made to be broken.' Seven hundred Quidditch fouls are listed in the Department of Magical Games and Sports records, and all of them are known to have occurred during the final of the first ever World Cup in 1473. The full list of these fouls, however, has never been made available to the wizarding public." (QttA, ch. 6)

Find the ten most common fouls below:

Each year, each House would play the other Houses, resulting in six Quidditch matches throughout the year:

The regional teams compete for their regional cups in the regular season.

The Quidditch World Cup is held every 4 years.

US and UK Covers 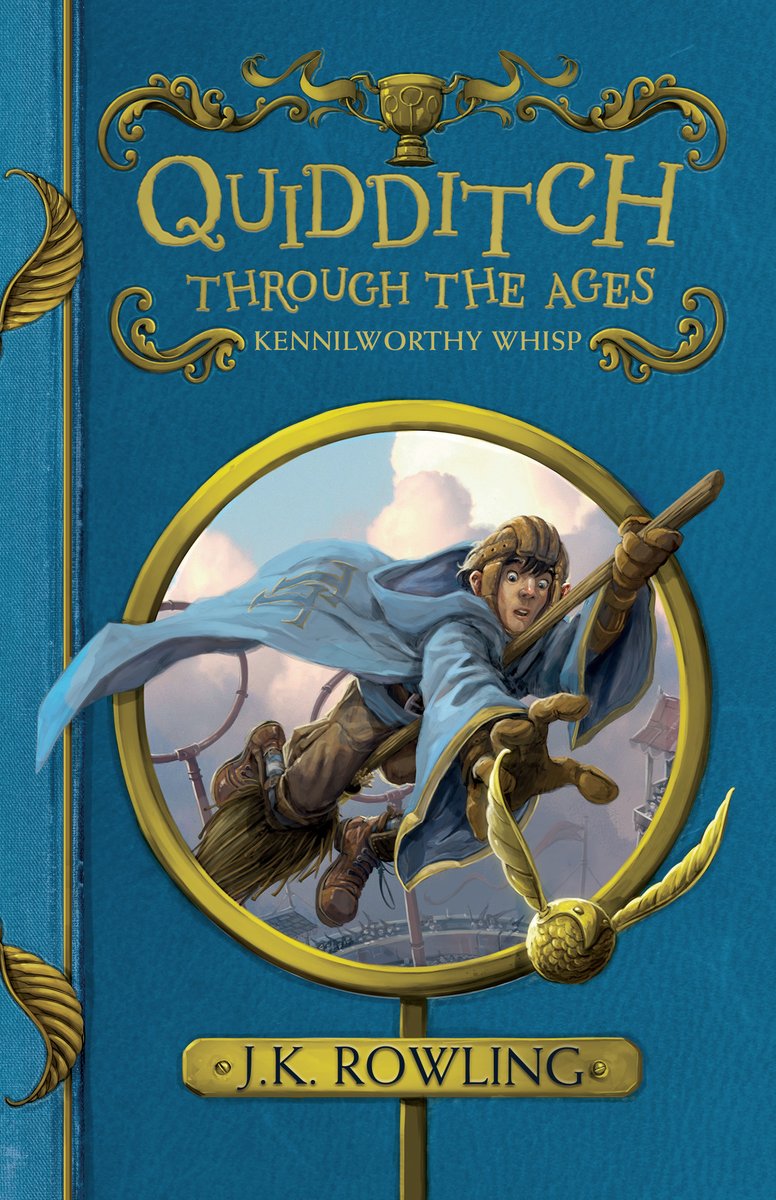 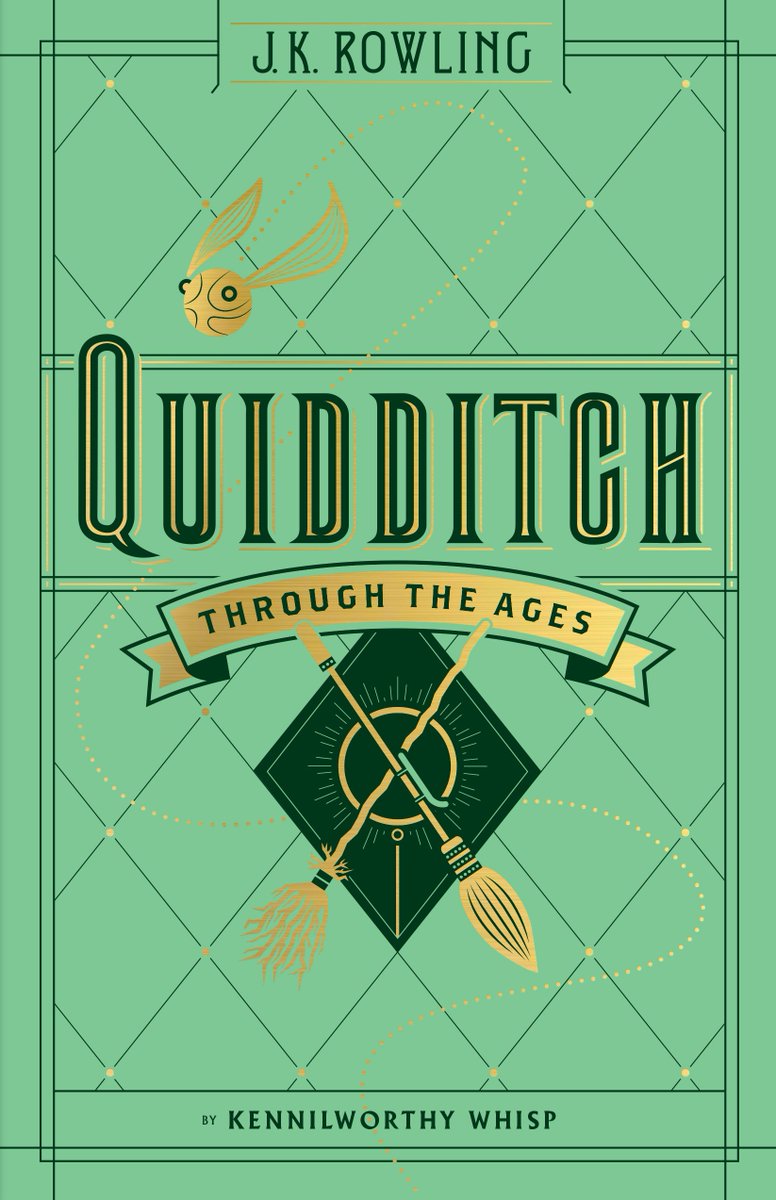 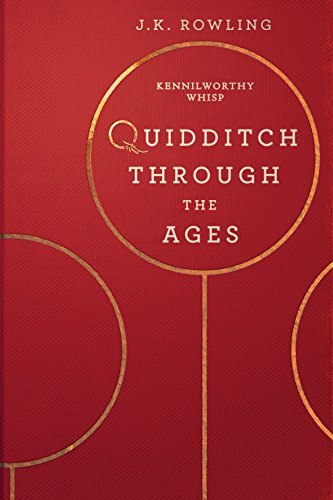 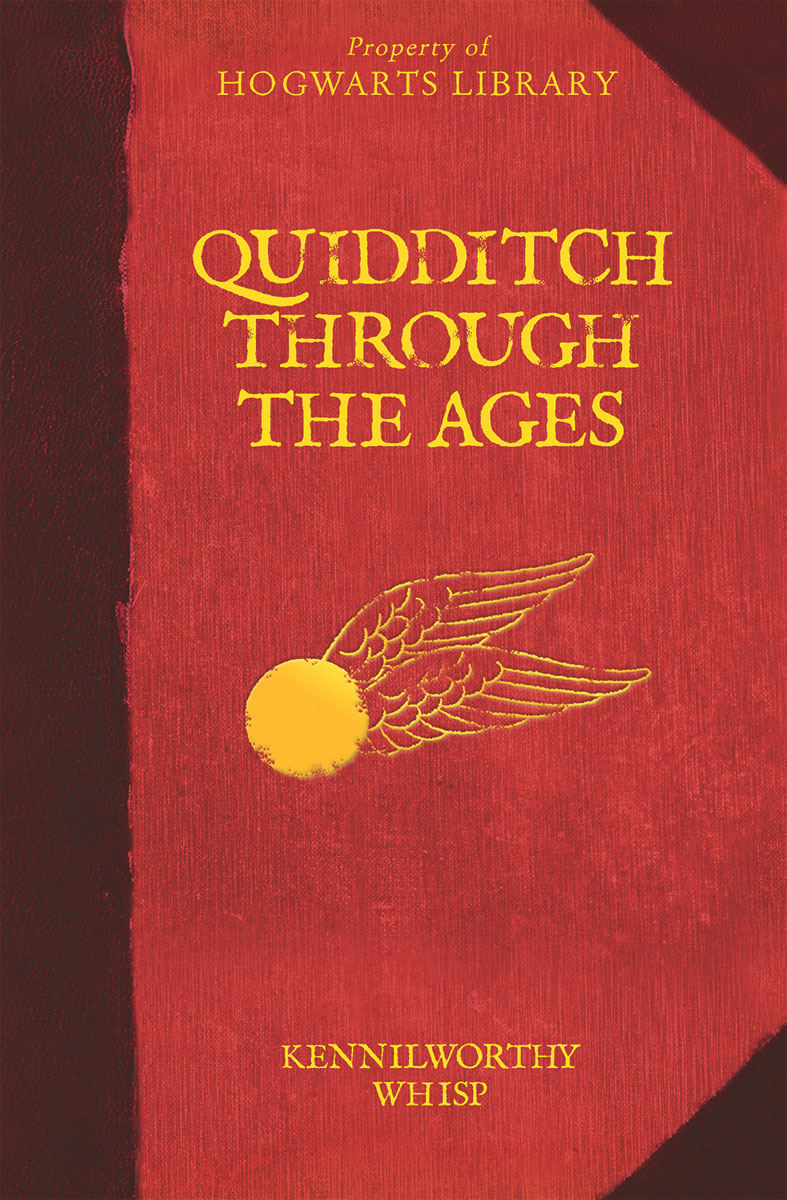 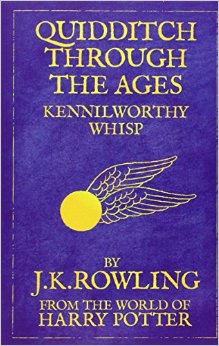 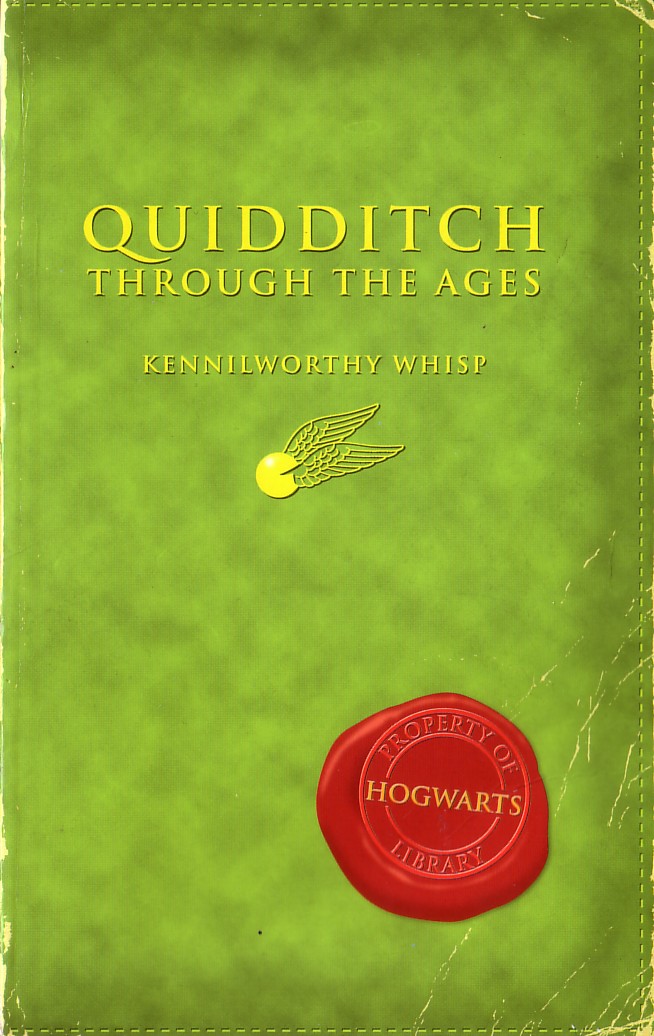 The illustrated edition of Quidditch Through the Ages was released in the October 6, 2020 by Bloomsbury and Scholastic. Each page features color illustrations by artist Emily Gravett. The cover of the Scholastic edition features a giant Snitch and a few small Quidditch players on a green backdrop, while the cover of the Bloomsbury edition features brightly uniformed Quidditch players and equipment on a blue background. 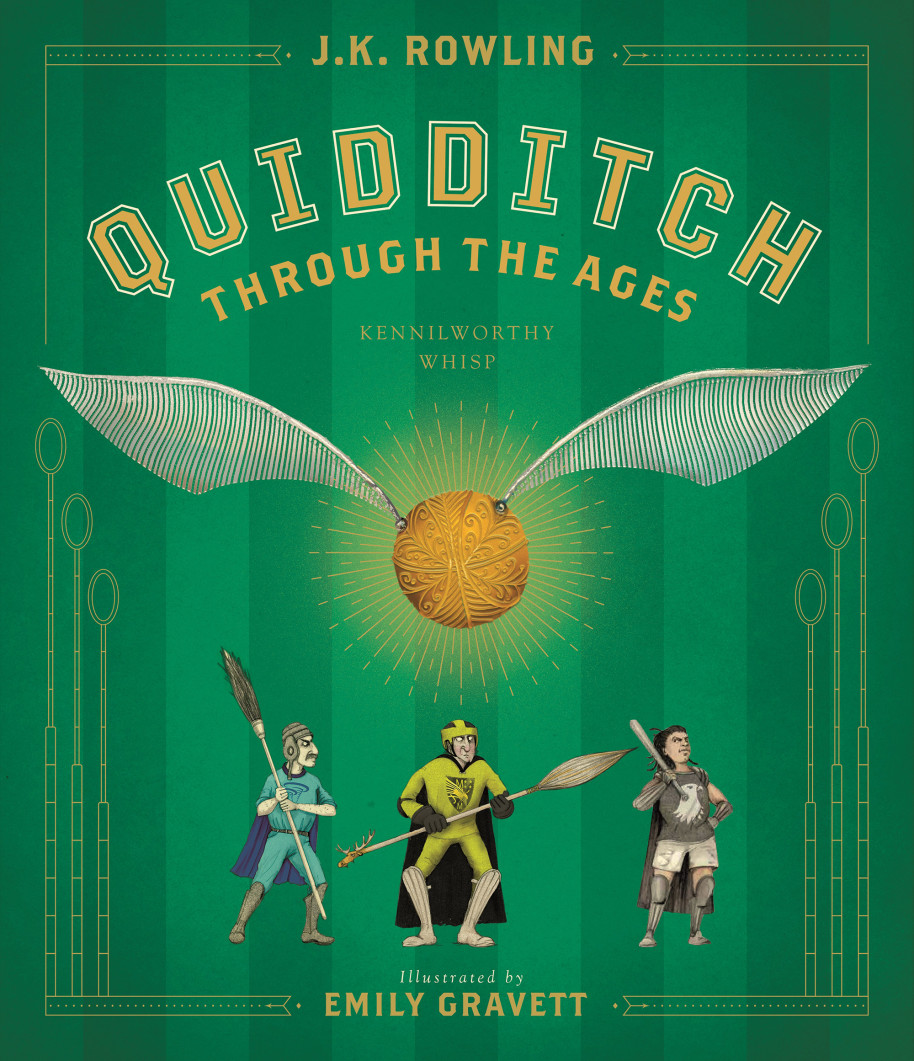 The Scholastic “Quidditch Through the Ages” illustrated edition cover 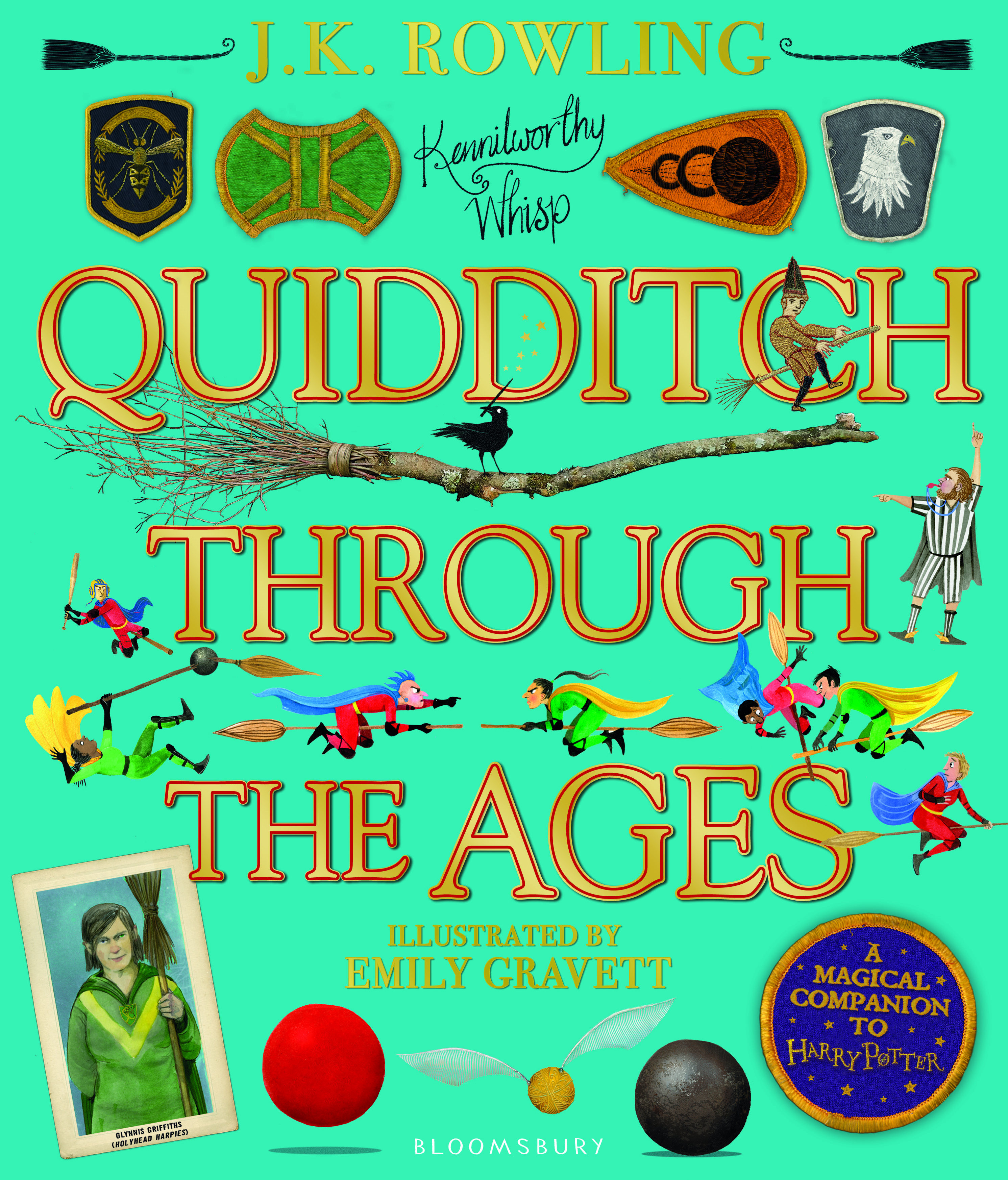 The Bloomsbury “Quidditch Through the Ages” illustrated edition cover 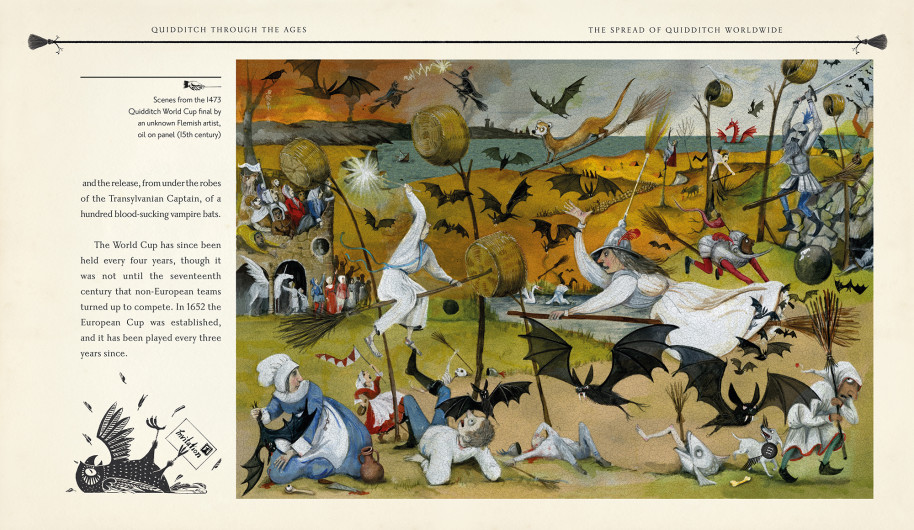 Gravett drew the 1473 Quidditch World Cup final, which seems to have featured a bat attack. 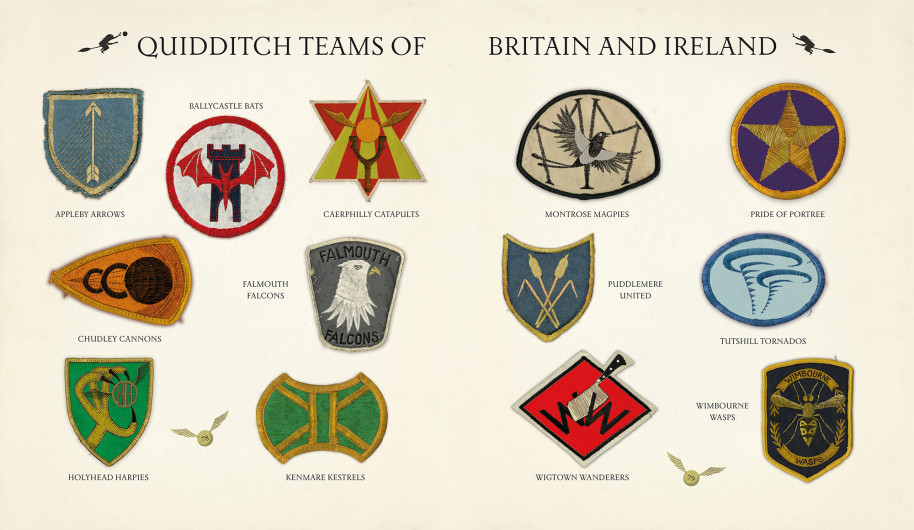 Here are the emblems of the Quidditch teams of Britain and Ireland, several of which appear on the UK cover of the book. 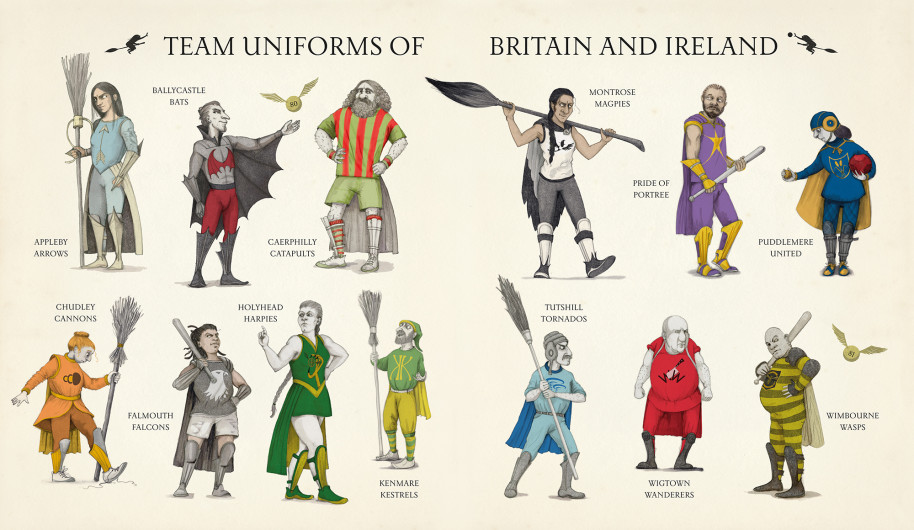 Gravett has illustrated the fantastic uniforms of the British and Irish teams. 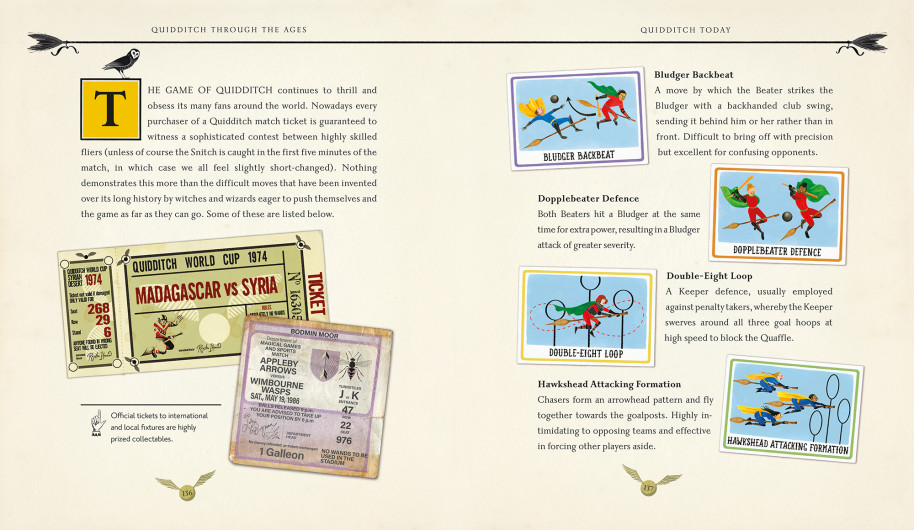 Here’s a look at a few moves you might find on the Quidditch pitch today. 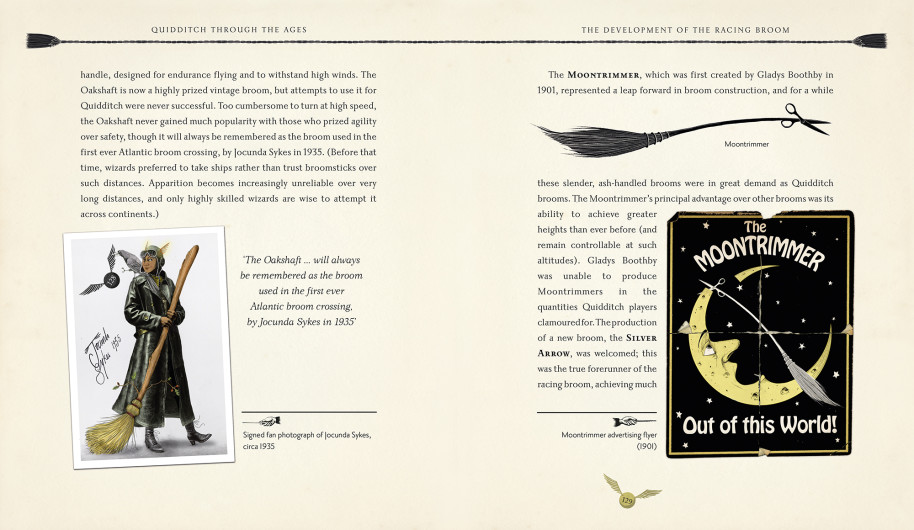 This page discusses the development of the racing broom, with an illustration for the Moontrimmer. 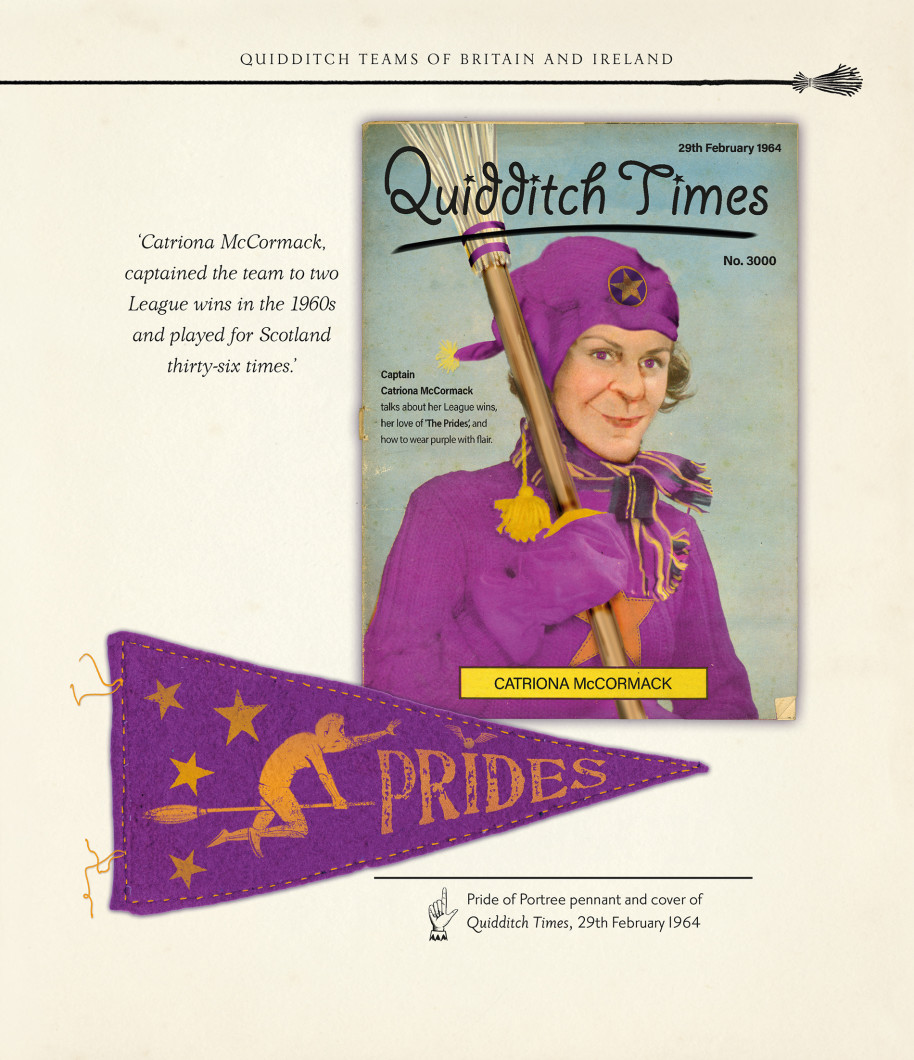 The 1964 edition of “Quidditch Times” featured Catriona McCormack, captain of the Prides.
Buy on Amazon   Buy on Bookshop 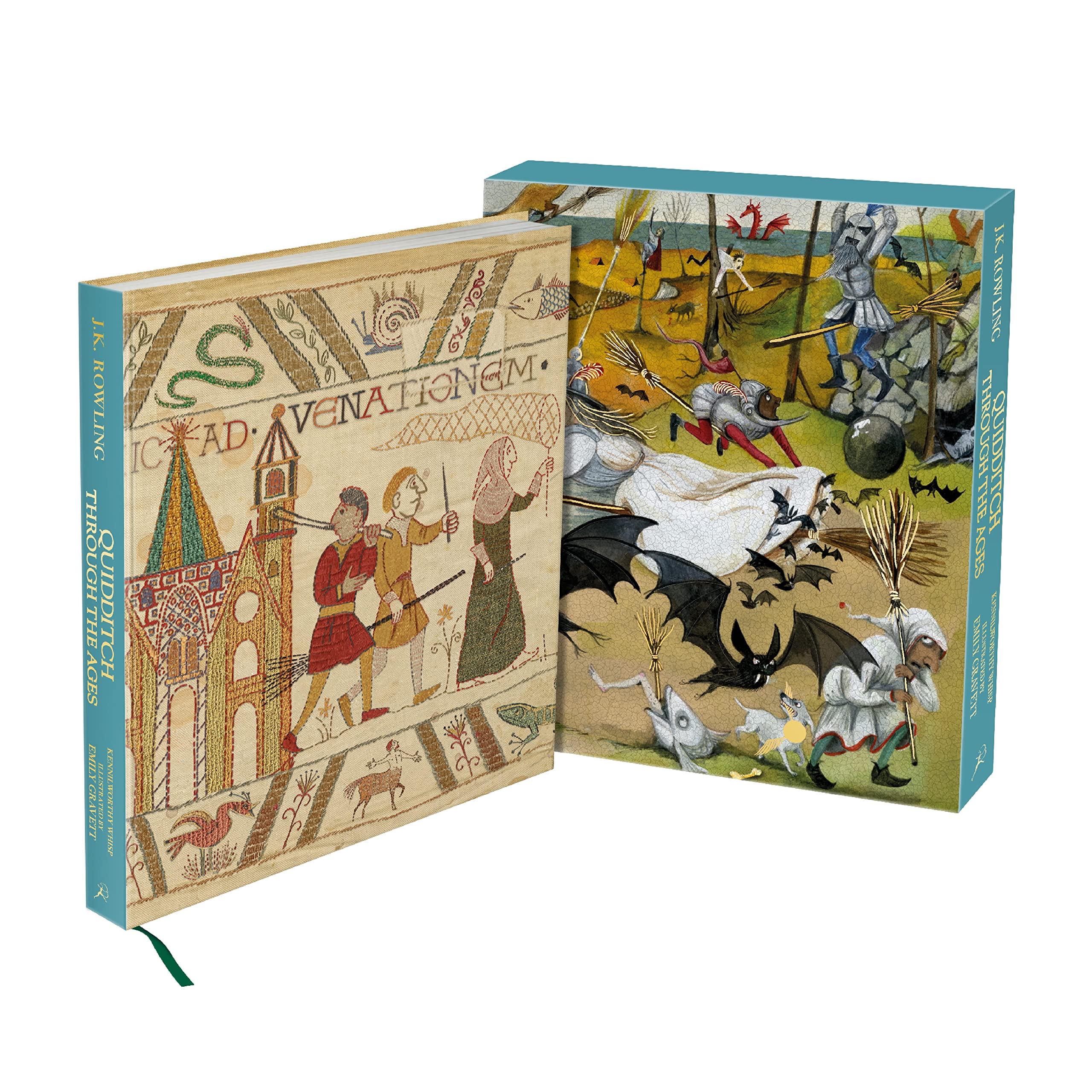 The deluxe illustrated edition of Quidditch Through the Ages was released on October 6, 2020, by Bloomsbury. It features artwork by Emily Gravett, and includes special features such as handcrafted memorabilia, two pull-out double gatefold spreads, and a colorful art print of the Sumbawanga Sunrays performing formation looping.
Audiobook

On January 26, 2018, it was revealed that The Walking Dead actor Andrew Lincoln would be narrating the audiobook version of Quidditch Through the Ages. With a running time of 3 hours and 10 minutes, this audiobook features bonus material for fans and is produced with immersive sound design techniques by Pinewood Studios' award-winning sound designers. It was first released on March 15, 2018, and in traditional audio CD format on June 14 of the same year. The behind-the-scenes video below shows an exclusive Pottermore interview with Andrew Lincoln.