Here you can find results and information about the most exciting quidditch event of the season, US Quidditch Cup 9. This tournament was held at the new Palmetto Health Fields at Saluda Shoals Park in Columbia, South Carolina. 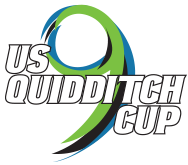 After three years of Texas Quidditch holding on to the title, a new champion was crowned. Quidditch Club Boston defeated Rochester United in a close final match in overtime after Rochester United caught the snitch to tie the game. The final score was 130*–140.