Look no further for information regarding Quidditch World Cup 8. Here you will find the best news about the 80 teams that participated in the tournament that took place in Rock Hill, South Carolina. 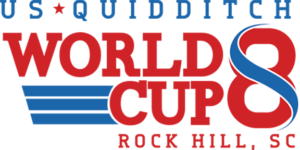 Instead of using the pool play system that the Quidditch World Cup has used in the past, USQ World Cup 8 switched to the Swiss system, which is preferable for large tournaments such as this one. The 80 teams were split up and seeded into two flights of 40 based on their standings in USQ. To view the rankings of the two flights for USQ World Cup 8, click here.

To ensure that two teams favored to win do not play against each other in the initial round, the teams were grouped into sections of four and the top four played against their corresponding bottom four (e.g., seeds 1, 2, 3, and 4 played against one of the random seeds 37, 38, 39, and 40.)

Every round afterward is completed in the same way. Teams continue playing against those with identical records, or as similar as can be if there is an odd number. Texas Quidditch once again won the World Cup, for the third year straight. They beat out Lone Star Quidditch Club in the finals. Texas Seeker Evan Carr caught the Snitch, winning the match - and title - for his team 120*–90.