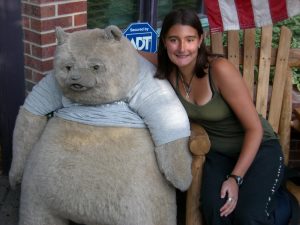 18-year-old Suzanne from the United States

When I was nine years old, my mom gave me a copy of The Sorcerer’s Stone, telling me that she had heard it was a good book and that I should read it. The rest is history… I became completely hooked. I finished the first one during Silent Reading time at school, and I was so excited for more and so impatient that I grabbed the nearest Harry Potter book I could find… Harry Potter and the Prisoner of Azkaban. I hadn’t realized that – unlike other children’s series I was into at the time – you really needed to read Harry Potter in order. Ooops.

It’s definitely a mixture of satisfaction and sadness. On the one hand, it’s great to finally have closure, to know the answers to all the questions that have been dogging us for years. On the other hand, it is very sad when something you’ve literally grown up with is suddenly over. No more mystery, no more anticipation, no more 24-hour read-a-thons. There’s definitely that “post-Potter depression” there. But the thing to keep in mind is that there are still plenty of things to look forward to. We had J.K. Rowling’s US tour with the Dumbledore revelation, then Beedle the Bard, and we still have three movies and an Encyclopedia to look forward to – not to mention all the fanfiction and fanart that comes out every day. Things will never be as special as they were when the books were coming out, but the fandom is still very much alive, and that’s a comforting thought.

Oh yes, considering that four out of my top six favorite characters died within sixty pages of each other – Fred, Snape, Lupin, and Tonks. The deaths of Remus and Tonks hit me especially hard, I couldn’t stop crying for about twenty minutes. But as much as it pains me, I understand her rationale behind the deaths of each of these characters. Sacrifices had to be made, and we knew we were going to lose people we loved. I have to say, though, when I found out that Remus and Tonks had been killed in the place of Arthur Weasley, a small part of me wished he had died instead. I have nothing against him, in fact I quite like him. But I felt more attached to Remus and Tonks, and felt that the death of Arthur would have had the same emotional impact on readers, because of the way it would have affected the rest of the Weasley family.

Which Potter character do you relate to most?

Aaah, see, you’re tricky. You don’t ask who my favorite character is, which for me is a very different question. I think that I relate to Hermione the most, though. Like Hermione, I’m not quite in the mainstream, love to read, am extremely neurotic about grades and schoolwork, and am rather insecure/afraid of failure. I’m not outspoken or bossy like she is though, and I also think I’ve got a bit of Luna in me because I’m rather spacey at times. But my favorite character – the one I admire the most – is Professor McGonagall, hands down. She’s a wonderful teacher, and such a strong woman with a wicked sense of humor. Plus, she doesn’t take anybody’s crap. Gotta love her.

Are you excited for the movies to come, knowing how it all ends?

Yes, which is a tad surprising, considering how critical I usually am of the movies. The third and fourth ones in particular were huge disappointments for me. But I really enjoyed the fifth movie, and the sixth looks really promising from what I’ve seen in the previews. And I am SO excited to see what they do with Deathly Hallows… Especially the scenes with the Seven Potters and the Battle of Hogwarts.

How do you feel about Half-Blood Prince being pushed to July?

I was at my friend’s house when I found out. I looked at her in disbelief, and we both just went, “What the HECK, WB?!? What the HECK?” I still am extremely disappointed. It was obviously a financially motivated decision, made with an utter lack of consideration for the fans. The WB was riding off the success of Dark Knight, and thought they could make more money off HBP if it was pushed to July. As if they needed more money, and as if Harry Potter couldn’t pull its own weight at the box office. The movies have already made more money than the entire Star Wars franchise, for crying out loud! Plus, now that it’s coming out in the summer I can’t see it opening night, because I’ll be working at sleepaway camp.

If you could make the decision on where Deathly Hallows would be split for movies 1 & 2, where would you split it and why?

I think that I would have the first movie end at the end of “The Silver Doe,” right after Ron destroys the locket Horcrux. It’s about halfway through the book, and Ron destroying the Horcrux would serve as a wonderful climax. It would give the first half a concrete ending, making it a more complete movie that could stand on its own. I’m sure they could end it at a moment that’s more of a cliffhanger, but from a cinematic standpoint I think it’d be a bad move. And personally, I’m all cliffhangered-out.

Just three thank-yous: To all the fans who love Harry Potter as much as I do, to everyone at Mugglenet for all the fantastic work you do, and most importantly, to J.K. Rowling for enriching all of our lives with this wonderful, magical world. Also, a special shout-out to Laura, Tamar, Hannah, and Carolina – I love you all, and the last few years of Harry Potter wouldn’t have been the same without you!