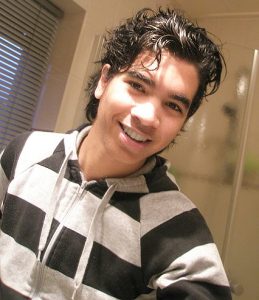 Haha it was kind of stupid really. I borrowed Philosopher’s Stone from a friend of mine, I think it was ten years ago. Well I was told it was a fantastic book and a fair few people were reading it, but, to be perfectly honest, I absolutely did not in the slightest bit feel like reading it. I don’t know, I didn’t really like reading (still don’t), but somehow, I gave it a shot. I mean, everyone started to read it and I borrowed this one from a friend, so I couldn’t pretend I read it and return it to my friend. What if he wanted to discuss the book? So anyway, I started reading and oh was I hooked from the start. My love for Harry Potter started. After I finished reading, I immediately went to the store to buy the second and third book. When the fourth book came out I got it on my birthday. I went to the midnight release of the Dutch translation of the fifth and sixth book. And of course I could not wait for the Dutch version of the last book, so I was beyond ecstatic to hear about a midnight sale in town of the original English Deathly Hallows. I turned up around 10:30 p.m. in front of the book store, I didn’t mind to wait for one and a half hour. But I forgot it was a worldwide release, and regarding the fact my country is exactly one hour ahead of the UK, I had to wait for two and a half hours. Frankly, I got to talk to people I never met before and it was all great fun. Guess it’s the magic of Potter that connects us all, innit?

It’s really hard to explain it in words, it’s more of a double feeling I guess. On the one hand, I feel happy and relieved when I look back on the whole Harry Potter era, because it’s been a brilliant time of my life. On the other, naturally, I’m incredibly sad. I think I will feel like crying from 2011 until the day I die, my God I’m dramatic. As a matter of fact, in order to continue my life I think I will need to check into rehab, a special one for Harry Potter fans. Now, I just try to enjoy every single bit of Potter news to the fullest. But I know it will never leave us. Harry Potter is here to stay for eternity.

In Chapter 1 of Half-Blood Prince, the Muggle Prime Minister is told about the existence of the Wizarding World. How do you think you would react to news of a magic world?

If I were that Prime Minister, I would wonder how some random dude managed to pop into my office like that, so I would be quite gobsmacked from the first moment. If I were told by somebody, I think I would remain skeptical. But if someone were to actually prove it with a little magic, I would definitely jump into the air of excitement. I love magic! I reckon I will stay up all night and think about how the bloody hell this could be possible. I will most probably be wandering around the streets, intensely hoping to spot something unusual.

Before being told who the Half-Blood Prince was, what did you think about the title?

To be honest, I am usually not someone who wants to know everything and who wants to find out about things straight away. I always prefer to start reading and learn things along the way to keep it all exciting. Though of course, I like to listen to MuggleCast and speculate about the books.

However, I do not really care to think that much about the titles and to find out a supposed hidden meaning behind it, because I know I’ll end up being incorrect anyway. To answer this question, I reckon the first thing that crossed my mind reading the title Half-Blood Prince was that there may be a new character to be introduced in the story. Actually I recall the first thing that crossed my mind was a Mudblood Prince Charming.

Draco is pressured to follow in his parent’s footsteps. Do you think that he truly believes in the way of the Death Eaters or has he simply been influenced by his upbringing?

I think it would be rather weird for a kid to already have thoughts with the likes of a Death Eater. It’s hard for me to believe someone could develop such way of thinking and reasoning. So I believe it is all due to his upbringing, but deep down there is still a good side hidden in Draco

From the trailers we have seen thus far, it seems as though the movie won’t focus too much on Harry’s Potions Book. How do you think the lack of “Half-Blood Prince” scenes will hurt the movie?

I reckon they would have come up with something to shorten the story a bit. In each movie there is something from the book they will focus on the most, just to make it less difficult to apprehend for the non-readers, and it is also much easier to write a decent storyline. In OotP, they focused a lot on Umbridge and Dumbledore’s Army, and less on the actual prophecy. I think Dumbledore and Harry’s conversation at the end lasted for about 30 seconds in the movie? Anyhow, with this movie, Half-Blood Prince, I think they will mostly focus on all the love affairs. Also, when I see the trailers, Harry and Dumbledore going back in time with the pensieve takes a prominent role as well (as it decidedly should!).

We haven’t seen any scenes of the Potions Book, but we have seen a few scenes of Slughorn teaching Potions. We saw a snippet of the Sectumsempra scene as well. So regarding the fact that this is actually in the film, I’m quite convinced that there will be enough material featuring the Book. Harry’s surprising talent in Potions class has got to be explained, and same goes for the origin of the Sectumsempra curse.

I don’t know how far the search for the Half-Blood Prince’s identity will go in the movie. More like Hermione’s search though, as she’s the one who’s kind of psychotic about it. I wonder if we will get to see Hermione constantly nagging about it, and Harry outshining her in Potions class. Would be great fun!

These are only a few things to be really excited about, I’m just extremely curious how they will explain the story and how it will differ from the book. I will just stop talking now before I release my inner groupie and start raving about how thrilled I am to see this flick. Next!

What about the exclusion of The Gaunts and Voldemort’s past? Bill & Fleur? Dumbledore’s Funeral?

Dangit, of course I would have loved all of those parts to be in the film! And I am very iffy about some of these exclusions. Let’s take Bill and Fleur for example. Bill is not featured in this movie, at all. He must be featured in the next movie, because we get to see his wedding with Fleur. How the heck are they going to explain Bill’s torn face, his gruesome scars caused by Greyback? Hang on… did we not get to see pictures of Bill on the DH set? I cannot remember noticing any scars on his face, might have to take a second look at it.

Voldemort’s past is so interesting and in my opinion important to understand the monster he has become. But I guess they thought it wasn’t worthy enough to put it in. Sometimes I just don’t get it why they cut out important parts or things that can make the film that more interesting, while its runtime is a little over 2 hours and 15 minutes. Just think about what can be included within an additional 30 minutes. At least 3 to 5 scenes. At least a funeral!

Oh Dumbledore’s funeral. How much I wanted this to be in the movie. But I think they have come up with something else. From what I have seen in trailers and clips, the students and teachers will pay a tribute to him, and I also saw all the candles in the Great Hall being doused. Perhaps that is just after Dumbledore’s death? How sad!

I salute MuggleNet, for playing a big part in keeping the Potter fandom alive! We all can never thank you guys enough. In addition, I would like to give a shoutout to MuggleCast for countless hilarious moments they shared with us. MuggleCast was a real outlet for me, like whenever I felt the urge to talk everyone’s ears off about a new trailer, I turned to you guys and listen to another one of those magnificent trailer discussions.

Oh, and the sixth movie is going to be epic! I can hardly wait any longer! Thanks so much, Kat, for naming me MuggleNet’s Fan of the Week!

Tags: fan of the week