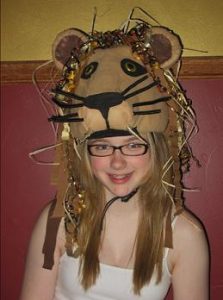 15-year-old Katie from the United States

I think I was about eight when my obsession began. I first discovered the Harry Potter series after I had seen a clip from the first movie at a local store. I thought it looked interesting, so I decided to read the books. Needless to say, I fell in love with them. I quickly read the first four books, which were the only ones released at the time. After the fifth book was released and read, I found out that there was going to be a midnight release party for the sixth book at my local Barnes and Noble, and I insisted upon going. That party was the first time I was truly introduced to the Harry Potter fandom, and I’ve been a part of it ever since.

For the first few months after the Deathly Hallows release, I was definitely in a state of “Post-Potter Depression.” But by this time, I’ve come to realize that the series isn’t going away anytime soon. The fandom continues on, even if there aren’t any new books to discuss. We’ve still got movie releases and Harry Potter conventions to look forward to. Harry Potter is never really going to end.

What is your favorite moment from the books?

I have far too many favorite moments from the Harry Potter series to choose just one, but if I had to make a decision, I’d probably choose the canaries from Half-Blood Prince. It was great to see Hermione so angry at Ron for being with Lavender. I’ve always been a huge Ron/Hermione shipper, and this scene made me really happy because it was the first time I really figured that they’d have to end up together in the end.

What is your favorite moment from the movies?

Every time a new movie is released, I have a new favorite scene, but as of right now, I really enjoy any scene that has Luna Lovegood in it. She can be quite comical at parts, but I love her character especially because she is always there for her friends and she isn’t afraid to be different.

If you could spend the day as one GOOD character from the books, who would it be?

I think I would probably like to spend the day as Luna. She’s so carefree and whimsical. She doesn’t care about what others think of her. She’s quite independent and I think it would be fun to spend a day in her shoes.

If you could spend the day as one EVIL character from the books, who would it be?

I don’t really count this person as “evil” anymore, but I’d love to spend the day as Severus Snape! It would be fascinating to be able to see things from Voldemort’s side of the war and then again from Harry and Dumbledore’s side. Being that close to such powerful people would be really interesting.

MuggleNet has a new book out, “Harry Potter Should Have Died.” Thoughts?

I got mine early! At my local Barnes and Noble, they were on the shelves May 23rd, so naturally, I bought a copy! It’s really captivating to read all of these famous arguments from both sides. It’s been getting a lot of attention at my school as well. People see the title while I’m walking down the halls and they give me these nasty, glaring looks because they think I wanted Harry to die. It’s become quite entertaining to walk around school with the book.

I’d to thank everyone here on MuggleNet for creating and maintaining such a fantastic fansite. Also, to J.K. Rowling: Thank you so much for everything you do! Your writing means more to me than anything in the world! I’d also like to give a huge thank-you to my friends and family who have to put up with my Harry Potter obsession on a daily basis. The Harry Potter fandom has been an important part of my life for the past seven years, and I know it will continue to be for many, many years to come.