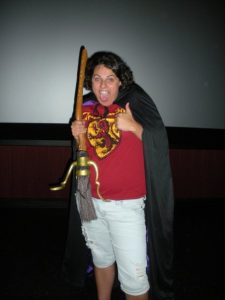 21-year-old Tasha from the United States

When I was in sixth grade I needed a book to read and picked it up at the library. I had no clue what I was getting myself into or that I was about to read a book that would become such a big part of my life.

It was very bitter sweet when Deathly Hallows came out. It was exciting to find out the end and how Voldemort was finally finished off. But on the other side I was deeply depressed when I realized there would not be another book coming out. But all good things come to an end.

So, Half-Blood Prince is out in theaters. What did you think?

I can honestly say that I was entertained throughout the whole movie. But I do not compare the movies to the books. There is no way that you can. A movie cannot capture the magic of the books.

What part of the book was left in that you were SO EXCITED to see come to life?

With me it wasn’t a certain scene that made me so excited to see in real life. It was some of the characters. I was very impressed with the way Slughorn was done. I thought he was portrayed very well. I also thought Draco was much better in this movie. I could connect with him. And I thought the whole vanishing cabinet part was very well done.

What did the film makers leave out that left you a little disappointed?

I was disappointed that the film makers did not make the horcruxes as big of a deal as they are. And that they did barely anything with Voldemort’s past. It is such an important part of the story to really understand how to kill him. They didn’t explain Voldemort’s love for having treasures or his special connection with Hogwarts. I was disappointed because it is such a big part of the story and it makes Voldemort seem more real.

How did you feel about the Half-Blood Prince portion of the storyline? Were you satisfied?

Honestly, I wasn’t satisfied. The end when Snape tells Harry that he is the Half-Blood Prince was a let down. It was like it wasn’t a big deal at all. When it is because its in the title of the book/movie.

After leaving the theater, how did you feel? Did the movie leave you excited, sad, or something else?

I left the theater excited because anything that has to do with Harry Potter gets me excited.

Thank you Mugglenet for this great honor! 🙂