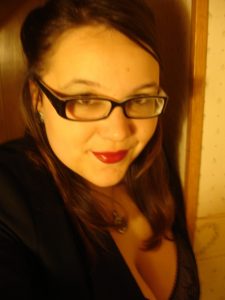 23-year-old Sara from the United States

I first became a Harry Potter fan when I was 9 years old. It was the beginning of fourth or fifth grade and my dad had gone to Borders, only a few months after Sorcerer’s Stone had come out. He knew that I needed a new book so he bought for me. I think I finished in a day and I remember being hooked in fast. It was cool to have a hero who was so close in age to me.

It’s your fifth year at Hogwarts, and man is it going to be tough! OWL’s are at the end of the year, and you’re nervous, especially for…

If it was O.W.L. year…I would be horrible at Potions! It’s so exact and precise and I can barely bake cookies from a recipe! I would probably melt my cauldron or blow something up!

OMG! You have your first crush! Would you use a Love Potion, Impressive Magic (IE: Francis the Fish), or a singing cherub to win them over?

My first crush? Easily, I would use a singing cherub! No one can resist being serenaded to!

You’ve met with your Head of House and started to talk about your future after Hogwarts. What careers are you considering and why?

Meeting my head of House (Flitwick! I’m a Ravenclaw!), I would express an interest in either returning to Hogwarts to teach or to become a magical historian…someone has to pick up where Bathilda Bagshot left off! I love history. There is just something about history that makes it so exciting…to know how things came about. I bet I’d be the only awake in History of Magic class. Maybe I could convince Binns to let me take over!

Professor Umbridge isn’t teaching you a single thing in DADA, and you’re sick of it! You’ve heard about a secret organization called Dumbledore’s Army and consider joining. Do you?

I would join Dumbledore’s Army in a second. I don’t like being held back by people and when things are happening that I don’t like, I try to change it. I’d like to think that I was brave enough to join the DA and that I would be great at it too.

There are so many rooms in the Department of Mysteries, the Time Room, the Brain Room, the Dias Room, etc. Which room would interest you the most and why?

If there was one room in the Dept of Mysteries that I could explore, it would be the room that is locked, the one that Alohomora and Sirius’s knife didn’t work on. I am so curious to find out what exactly is in there. I know everyone says its love and I believe it, but I want to see it!

The Hall of Prophecy has tons of Prophecies on record. If there was one about you, what would it say?

I don’t really have any theories about anything but I do wonder how on earth Hagrid’s pink umbrella works…it contains the broken pieces of his old wand, but both Ron and Harry’s broken wands didn’t work so that really bothers me haha! Its super awesome being chosen as a Fan of the Week! I’ve been a Harry Potter fan for a huge part of my life and I’ve gotten two Harry Potter tattoos to show my love and dedication for.it! A huge mega shoutout to my dad, without him, I would never have had this longtime obsession with Harry Potter and that would be horrible! You guys all rock here at MuggleNet, seriously, I’m addicted to this page! Thanks for picking me! Oh, one more thing, Redvines are awesome. I attached a picture of my Deathly Hallows tattoo (you can kind of see my “Wit beyond measure” tattoo underneath. I have “man’s greatest treasure” on my left wrist)