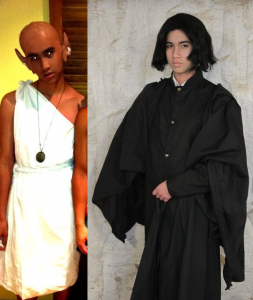 When people ask me this, I can never answer quite adequately. The only thing I can equate it to now, after so many years, is that it feels so far removed that it was like learning to walk as a child. It’s just been a part of me for so long, I can’t remember what life was possibly even like without it. I know that it was given to me as a gift; I wish I could remember who it was that gave me the greatest gift I’ve ever and will ever receive because I’m fairly sure I owe them big time.

I know this answer will not make a lot of people happy, and let me just preface this response by saying that I’m not just saying this to be controversial – I’d have loved to have really enjoyed the final movie of the best part of my life, I really would have. However, while the experience of going to see the film was pretty amazing, being with all the fans at the midnight screening in my Snape costume, for me, the movie kind of missed the point. I didn’t hate it; it brought a lot of things to life from the novels and for that, I’m very pleased with it, and in some ways, that’s all the films should be, as they couldn’t possibly compare to the films. Don’t get me wrong, I’m not being a purist and saying changes shouldn’t have been made – I’ll elaborate on this in the other questions – because some of the changes worked really well, as they kept to the spirit of the novels, and that’s what I believe makes all the difference. I think some of the changes in the final film literally shift the focus and moral outcome of the narrative, and that’s pretty unforgivable. Specifically, I feel as if philosophical notions of death, love, and what really destroys a person were traded off for exciting visual effects and action sequences. Fair enough for a pure film audience, but that just meant I couldn’t enjoy it.

What were your favorite scenes that were straight from the book?

I thought most of the sequence with the resurrection stone in The Forest Again was absolutely spot on, it was gorgeous and you really could feel that sense of comfort, though it strangely neglected James. Helena Bonham Carter’s Polyjuice Hermione was unbelievably well acted; even in the way she held her face, she was perfect and I did like the Gringotts sequence, although obviously there was no other option but to rush it. I thought the flash into Voldemort’s rage after figuring out they were Horcrux hunting was brilliant as well. My favorite altogether was probably the Room of Requirement, with the Golden Trio facing off Draco, Goyle, and Blaise – it brought it back to that schoolyard rivalry and showed just how much each character had changed and matured. Particular props to go Tom Felton for his acting in that scene.

What scenes that were changed did you liked? Disliked?

There are three categories of changes in the film, I find; changes that worked really well, changes that were don’t make much of a difference but were random and unnecessary, and changes that actually detracted from the overall moral and philosophical outcome. Generally, though, I’m confused at the whole ‘I will try to fix what was never broken’ approach taken by the filmmakers. I actually really appreciated some changes that made the film make more sense to non-readers, such as Harry being able to sense what the Horcruxes were, it eliminated the need to explain the history of the various objects, interesting though they were. I was baffled by some changes, such as Harry’s return to the Great Hall; why change something that worked really well? Also, I think some changes took away some of the depth that engaged readers would’ve appreciated, like the symmetry of Snape dying at the Shrieking Shack, returning to where he was saved so many years before. (Also, why not bring back the set to remind audiences of how far and how long the adventure has been, so you don’t have to do a lame montage to produce the same effect?) There are a lot more circumstances of my active dislike than the first two categories, but I’ll just briefly talk about my main issue, and that was the final confrontation and the way in which Voldemort (and to a lesser extent Bellatrix) is killed. The fact that it was a physical duel of power is a major change that just in essence misses the point. Instead of publicly denouncing and humiliating Voldemort in front of a crowd of onlookers, so as not to just kill him but destroy all of what’s left of his legacy, we’re fed a bunch of face clutching with 80s sci-fi camera angles and gratuitous use of 3D. Finally, the fact that he shatters into a million little pieces maintains his mystique – after all, he’s been blown to smithereens once before, but an actual cold, dead corpse shows that even twisted Voldemort is equal in death, as are all wizards and muggles alike.

The WB says they are pushing hard for DH:P2 at The Oscars this year! What do you think Potter deserves to be nominated for, and what do you hope it would win?

Well, I think something similar to Return of the King; I’m sure its contribution to the technical aspects of films, so the various costumes, make-up artists, set designers, etc. will be honored. I’m also hoping for an Alan Rickman Oscar for Best Actor in a Supporting Role. He really does deserve it.

Now that all eight films are out, how to feel about the movie series as a whole? Favorite? Least favorite?

I always need to remind myself that the films are merely visual representations and are not where the Harry Potter experience truly lies. The silver screen is a nice way to bring certain elements to life, but the page is where Harry really is. It’s hard to choose a favorite film, but I really do like what David Yates did in Order of the Phoenix – he didn’t cover the whole thing by any means, but he kept to its spirit and left little hints in newspaper articles and things that book lovers would appreciate. My least favourite is definitely Goblet of Fire though. I don’t even know what happened, but that wasn’t just bad for a Harry Potter film, that was bad as a film in general.

Well, I’d like to shout out to my friend Tanya and my sister Samantha, who both read MuggleNet and hopefully will read this. I’d like to say that I did notice there’s no question 7, and I’d like to say that this greatly improved my day and there really is a magic in the number 7. It’s 77 days until I move to the UK (in true Harry Potter style, I will search the Scottish highlands for signs of Hogwarts) and I knew something fantastic would happen today when I saw that. Thanks so much for this, and I hope you enjoy my costumes from the last two HP midnight screenings I went to! (Reformed! Kreacher and Snape.) 😀