PocketWarwick is a free mobile app game released by Harry Potter actor Warwick Davis, who played Filius Flitwick and Griphook in the films. It is brought to you by iDiot Films, Davis’s own creative company, Offficial, an entrepreneurial, innovation and investment company, and digital designers Matmi. Davis said on the app:

I came up with the idea of PocketWarwick because I love technology and apps. I wanted to somehow incorporate what I do as a performer in making something that was fun and playable. PocketWarwick is kind of a fusion of the old 90’s electronic pets Tamagotchi, The Sims, and ‘me’. He lives inside your non-specific electronic handheld device. You have to make sure he’s entertained, fed, educated, and washed, as well as managing his career. There are many interactions you can discover and new outfits and decorations to unlock.

A Little Hollywood in your Pocket

First off, I want to say that I am a huge Warwick Davis fan. He has been in two of the most lucrative film series of all time, Star Wars and Harry Potter. He was the best (obviously) Ewok in Star Wars, a hilarious Professor Flitwick in Potter (as well as the equally creepy Griphook), and although he would never want you to call him one, an admirable and courageous peck in Willow. So when I heard that Warwick had decided to put out a video game that consisted of taking care of a mini, rather pocket-sized, version of himself, I knew it would be for me. 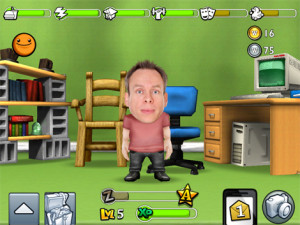 I downloaded the game onto my iPad, which is the only mobile device that I play games other than Solitaire or maybe Sudoku. When first opening the game, you are greeted by your pocket-sized Warwick, who immediately begs you to start interacting with him! Virtual Warwick actually gets bored incredibly fast, which I hear is very much like the real-life Warwick! 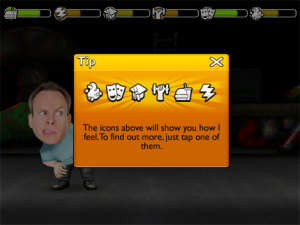 After a quick tutorial where you learn how to take care of your PocketWarwick, the game shares with you another essential task in keeping your virtual Warwick happy – helping him rise to the A-List in Hollywood! 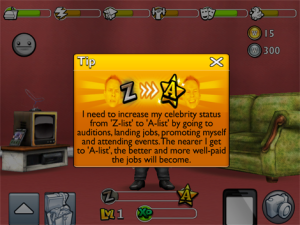 Every now and then you will receive a message from Warwick’s agent (via text, of course!) for a film audition. You can choose to go or reject it, by why would Warwick reject an audition? He would never! So once you’ve decided to try out, you have to prepare. In order to get an audition, you have to meet certain requirements, such as “very good” hygiene or an “average” IQ. If you fail to meet these but you go on the audition anyway, Warwick will not get the part. He comes home sad and actually loses a few experience points, bringing him back down towards Z on the Hollywood list. You could, of course, choose to consistently ignore Warwick’s agent, but since auditioning is the way only to earn Warwick gold without spending any “real life” money, auditions are it for this gamer! 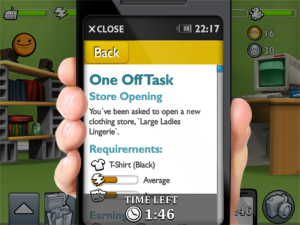 The auditions are fun, but preparing Warwick for them isn’t always easy. As the game progresses and your virtual Warwick has to purchase more required items such as clothing (frog and zombie costumes, naturally) or books (Chunder Games or Game of Gnomes, being my personal favorites) running out of coins is a very real possibility! In fact, it nearly happened to me several times, and I had to be careful about my spending. 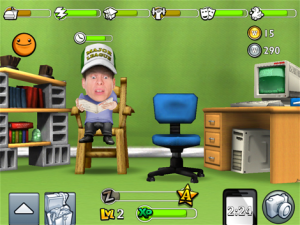 For me, the best parts of the game are the unexpected ones, and PocketWarwick has plenty! Your virtual Warwick, when left alone, will talk to himself and beg you to interact with him. If you feel like being a little mean, you can poke him in the head or in the belly and turn his face a bright shade of red! Careful though, doing this too often upsets Warwick! He also happens to be a pretty great dancer, and you can get him to do a little diddy just by tapping his feet! My personal favorite though is tickling my virtual Warwick! Running my finger side to side over his belly causes him to laugh and it’s absolutely adorable! There are many other interactions you can have with your PocketWarwick, but I won’t spoil them. Instead, I encourage you to play! 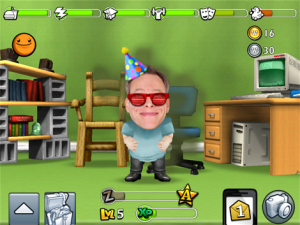 While going to auditions and interacting with my PocketWarwick was fun, I had a great time just sitting and listening to him! While Warwick was reading, watching television, eating, or even just sleeping, he says so many hilarious things including making jokes about his own autobiography, Size Matters Not, to dreaming about George Lucas and Angelina Jolie! He even makes a few crude jokes, including farting after eating a meal (“Oops, there she blows!”) and remembering to “get the crevices” while taking a shower.

There are also a lot of hidden gems for fans of Warwick to discover, including a statue of Jabba the Hutt on the bookshelf (recognize the books sitting next to it?) and a wand rack for his wall.

All in all, I think that PocketWarwick is a truly fantastic game. It’s fun, entertaining, immersive, and absolutely hilarious! A must-have for fans of the star! And the best part? It’s FREE! You can download PocketWarwick via your mobile device.