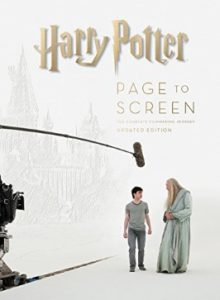 Buy on Amazon    Buy on Bookshop

The book dives (head-first) once again into the film adaptations of the beloved book series, showing us a world on the other side of the film camera. Yet where the first book maybe stopped itself from being too complex in detail (although it was physically complex, with paper handouts and prop replicas scattered throughout the book), the intention with this book is clearly to be “definitive.” All stops are pulled out, and the result is a 530-page guide that’s much harder to resist than it is to pick up (the book’s weight according to Amazon is seven-and-a-half pounds, nearly three times greater than Film Wizardry and a greater weight than the last three Potter books combined, in hardcover).

I may be the only member on staff here at MuggleNet who doesn’t own the first Potter book by Harper Design, Harry Potter Film Wizardry. I must assert that this is not due to my failure as a fan of the HP films, but rather to an unfortunate shipping incident with my former book club. I think the book is still in transit to me from the last pre-order season. Nevertheless, I have run across the book in stores (particularly in the gift shop of Harry Potter: The Exhibition when I saw it in New York City, and I took some time to really explore it). Because of this brief time spent perusing, but not owning the first book, I will enjoy both a) viewing this book on its own terms for the purposes of this review, and b) occasionally arbitrarily predicting where the two books differ. So far, there are the page counts and weights to consider (Film Wizardry is just 160 pages, and 2.8 pounds in weight).

My first impression upon receiving the book to review is that it is massive – 530 pages in a thick hardcover binding. The cover, unlike the busier (crimson) cover of Film Wizardry, is a deep blue – containing not images of the actors in their costumes, but only a picture of Hogwarts and its lake at night. I am reminded first of some research I did on MinaLima, the creative team behind the film props who designed the cover for this book (and the books appearing in the films), and also for the first time I am struck by the notion that the traditional view of Hogwarts began as a concept sketch. Coming into Harry Potter as I did, with the first movie to “guide” my imagination as to what Hogwarts should look like, I realize that I had no pre-existing perception of how the famous castle would appear before I saw the films. I still haven’t found a different visual. The view of Hogwarts is theirs (the filmmakers) and I agree, in all I have learned since 2001 about castles and Britain and boarding schools, that the Hogwarts on film is good enough to be my Hogwarts (in my mind). Yet the creative process behind taking the books and making them films had to answer this question (how would it look?) and countless others. Page to Screen is ultimately the guide behind these decisions and the decision-making process.

Harry Potter Page to Screen is broken into three parts (but really two, as the third is a small Epilogue). In Part One of the book, titled “The Making of Harry Potter” there is an insight into each of the films made, in the order in which they were made. But first, via an introduction like I have never experienced before, the story in the book begins with David Heyman and his then three-person production company, Heyday Films. We learn how the film rights were first acquired, how many meetings took place to find a director, screenwriter and cast, and in general how the “magic” began. The narrative of the book is exceptionally strong, beginning with the introduction and lasting throughout the entire book. To accompany the text in this book are images from ALL stages of production, from all angles of work and all sides of a studio. Page to Screen marries images and text so successfully that I found myself prying my eyes from one to experience the other as I read through the journey. 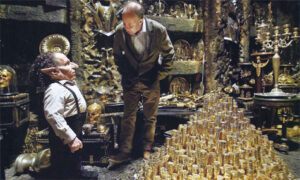 Essentially, Part One of Page to Screen details how each film came to be, with changes of director, advances in special effects, and how the ever-evolving story matched the ever-expanding cast of talented actors hired to tell it. Certain key scenes in each film are deconstructed, with insightful anecdotal and interview-style stories being told directly from the people involved. Set dressers, costume coordinators, props guys, stuntmen, and actors all have their say in how things happened. By the time I’ve reached Harry Potter and the Deathly Hallows, Parts One and Two in the book, I’ve fallen in love with every film prior (even the third, which I have been urged by friends for almost forever to make my peace with). As if this story, narrated by actors of fewest and greatest screen-time alike, directors, producers, and production assistants was not enough for this book, there exists Part Two of the book, titled “The Art of Harry Potter.”

Part Two of Page to Screen is like an encyclopedia of everything on set. Broken down into characters, locations, creatures, and artifacts, the “Art of Harry Potter” features a page (or more) for EACH character, EACH location, EACH creature, and EACH artifact present in the films. Even if their story was told in Part One (such as figuring out how Umbridge would look) there is additional detail in Part Two. Speaking of Umbridge, one of her cats in the films (appearing on the plates in her office) is riding a carriage pulled by a duck. Did you know? Well, it is. There are pictures of everything, and even (in Part One) collections of “continuity photographs,” which are Polaroids taken on-set of cast members during different times of shooting so that the make-up masters and costume designers can essentially match an actor’s look from one day’s performance to the next. Seeing some of the most famous scenes from the films being rehearsed, with the director standing on set next to a lead (where he isn’t, obviously, in the film) makes the whole process seem real in a way it never has before.

I had forgotten that there was a time when it was uncertain whether Dan, Rupert, and Emma would be returning to Hogwarts for the whole way through. I never knew that September 11th, 2001 began as an ordinary day of filming for Chamber of Secrets. I was reminded, in reading this book, that brooms don’t fly; rooms of requirement are not so easily filled as to walk past their entrance, muttering under one’s breath; and, finally, that each non-existent creature like a dragon or house-elf was designed with series of concept sketches and vetted through processes by people who do it for a living. Dobby could just as easily have looked like Gizmo, or like Daxter…

Although breaking the fantasy wall and seeing Hogwarts with camera rails, boom microphones and partially-constructed set pieces may have seemed at first like a non-enjoyable concept to me (since, hey, what do you mean the magic isn’t real?!), it is all-too-clear in reading this book that a different kind of magic has been made. It may even be far greater. The collaboration of so many different departments, so many people with different job titles who all united to produce not one or two but eight feature films of such quality, for ten years, with an aging cast we saw grow from youth to adulthood on screen, is astounding. The MSRP of $75 is not the price that this book is actually selling for on retail outlets, at least on the Internet. Yet even if it was, this book is the definitive story. No further insight into the films (except for some bloopers on upcoming video releases, which would be nice) is necessary. This book satisfies the craving. A perfect gift to one’s self or friends and family during this 2011 holiday season, I am now able to “close the book” on the films feeling as though I had taken that journey with the filmmakers. I now have more than just my ticket stubs.