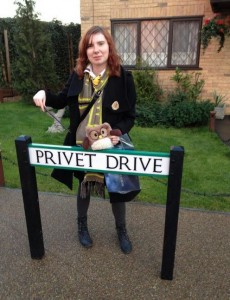 I first became a fan when I was seven and I was bough a set of the first four Harry Potter books for my birthday by my parents. At the time I liked reading but would only do so occasionally. That was until I got my hands upon the Harry Potter books. Ever since then I have loved Harry Potter and read all the book as soon as I got them. So in a way I have Harry Potter to thank for getting me into reading which is something I still enjoy to this very day.

Well this is kind of a group of memories but all the time I have spent with the University of Lincoln’s Harry Potter Society (UoLHPS). I joined in September when I discovered them and since then I have made so many new friends all of whom love Harry Potter as much as I do. We have had many events from our very own sorting ceremony to playing wizard’s chess and even having are very own Halloween party at the shrieking shed! But if I had to chose one memory for sure it would be the trip we took last Wednesday (20th Nov) to the studio tour at Leavesden Studio’s. It was a truly magical experience with a all the Christmas trimmings which made the day even more special. So without UoLHPS I would have never had this experience so it those guys I have to thank for this wonderful memory.

I’ve always thought my patronus would be some sort of dog, though it took me a while to figure out just what kind. Though I think something like a Husky would be a good fit for me. Like a husky, I am loyal and stick by my friends being there to help others when they need me. I am also hard working and work well in a team just like Husky’s do in sled teams. I’m also friendly with more or less anyone I meet as I’d rather be friendly with people in hopes of making new friends than distant and people getting the wrong idea. So overall I’d like to think a Husky would be a good fit for my patronus.

If I could have any prop it would have to be Luna’s roaring lion hat. While I am a Hufflepuff through and through there was no badger themed hat to my knowledge. So Gryffidnor has always been my back up house, so to speak. Also with Luna being my favourite character from the series it would be amazing to have something as special as that from my favourite character. I already have one of her wands, earrings and necklace, so the hat would be the gem in my Luna collection.