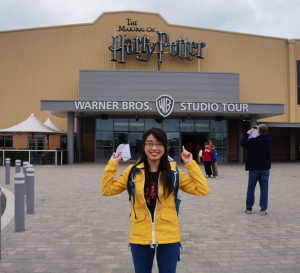 When I was 8, my mom said she heard there was “some popular book” called Harry Potter and she gave me a copy. Afterward, I couldn’t put the series down. Waiting for the books was agony and I went to every Harry Potter midnight release possible. I soon became the geek who quoted Harry Potter, and sent out Harry Potter Valentine cards. My transition from child to adult involved Harry Potter; and it will remain in my past, present, and future.

The day I arrived at Warner Bros Studios to see The Making of Harry Potter. I was so shaken up already when I stood outside the place because I had no idea what to expect. I was so mindblown at each little detail and I couldn’t stop talking about which set piece appeared at which part of the movie. Plus I got my first taste of butterbeer! I had a little moment when I stood in front of Privet Drive; like Snape in his memories.

Sword of Gryffindor. It symbolizes that you don’t have to be everyone’s hero like Harry to wield it, but you can be like Neville and grow into a confident person. Also, who doesn’t want a gorgeous sword?!

A hedgehog. If I feel threatened, I think I would curl in a ball and hope my natural armor will save me.