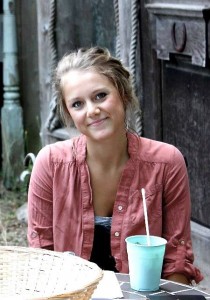 
How did you become a Harry Potter fan? I have been a Harry Potter fan since day one. I remember being about six years old and receiving the first three Harry Potter books as a Christmas gift from my grandmother. At that time they were too advanced for me to read on my own, however, when I was eight the first Harry Potter movie came out. On its first day in theatres my best friend and I waited in line to see it together, and I can truly say my life was never the same from that point onwards.

If I stumbled upon the Mirror of Erised, the reflection would be quite simple. I would see myself surrounded by those whom I love the most, my parents, sister, boyfriend and friends. Each of us would be healthy and thriving, and I would be busy doing a job that I love and making enough money to support a family of my own. There are of course other shallow and cliché desires that the mirror may display, however, if I truly ask myself what it is that I desire most, I can’t think of anything more than to have my loved ones close whilst living a healthy rewarding life.

The amount of Harry Potter memories that I would keep in my pensieve are uncountable, however, a few prominent ones come to mind. As cliché as it sounds, I would keep the ending chapter of Deathly Hallows safely stowed in my memories. The whole chapter ties in the entire series so well, and Harry’s true innocence as an 11 year old boy is seen again through his son. All hardship has healed, and Harry is finally free of pain and suffering, whilst living the rest of his life alongside Ron and Hermione and his own family. Further, it is fitting that it takes place at Kings Cross station, the plateau between the magical world and muggle world, between Harry’s life and death, and the gateway to a small, messy haired boy’s adventure. The original music played in the first movie also plays whilst Harry, Ron, and Hermione watch the train pull away which is nostalgic and so heartwarming to me. (This may be the memory I would use when attempting to conjure a patronus).

I would love to say that my patronus would be something admirable and valiant, such as a stallion… but I must be honest and admit that it would resemble something such as a sheep. I am not a particularly brave person, and though I am smart, I am no genius. I am however, a kind and easily pleased person. I chose the sheep because it embodies some of the qualities I consider myself to have. Sheep are cozy in thick wool coats (being warm is my utmost priority) and they give their wool to keep others warm, which is symbolic for kindness and generosity of heart. They spend their days with family and friends eating and sleeping in beautiful fields, a simple life that I would be more than content with. Further, sheep are generally rather fat, and though I am very skinny, I have a “fat” personality, wherein I eat a lot, do not exercise much, and am healthy and content.