Daniel Radcliffe attended San Diego Comic-Con this week to promote his new movie Horns, due out on October 31. Alongside director Alexandre Aja and Horns novelist Joe Hill, Radcliffe offered quite a few tidbits about the new movie, touching on everything from the religious and darker themes of the story to possible Harry Potter references.

Dan portrays Ig Perrish, who awakens one morning after the brutal murder of his girlfriend, Merrin, to find that he has horns growing from his head. Ig soon discovers that these horns give him supernatural abilities. Since Ig is suspected of committing Merrin’s murder, he sets out to find her true killer.

Early on, Radcliffe explained what fans can expect from such a dark and gritty character as Ignatius, the lead character whom he portrays in the film. Radcliffe commented:

For me, there is always something more interesting about a part that is multifaceted and has a dark side and it’s more true to life, even in this very heightened world that we’re in in the film. He’s a true anti­hero and he is absolutely good and you should root for him and you should be with him all the way, but that’s not to say he doesn’t do some questionable things, but even he questions them. It’s not without consequence. And as he says, he learns from that so that he can be, in some sense, redeemed by the end.

Further explaining the depths of playing Ignatius, Radcliffe also offered this insight on how he felt about the religious undertones of the character and the film as a whole:

I’m not a religious person, but I have always been fascinated by the mythology… in all religions, particularly, Christianity’s got some fantastic stuff in there. And actually, when [Alexandre and I] first met, we had a discussion… about my theater role obsession with the devil as a character in literature and music, obviously, as well. He is traditionally this very charismatic character, so I was very excited to play him.

Sounds like Dan is going to an entirely new place to get into character for this film! And speaking of getting into character, who would Radcliffe cosplay as if he could attend Comic-Con as a regular fan? His answers­ (two of them!) might surprise you. It certainly made us laugh:

Well, a half an hour ago, I did exactly that as Spider­-Man from head to toe. I also posed at the Sharknado 2 poster, which was pretty awesome. I’m excited for that. I loved it. That’s why I’m so excited for Sharknado 2. And I say that… unironically. I really, really enjoyed it. It was fantastic!

Finally, Radcliffe addressed some of the recent press rumors that have been circulating as to whether or not his Horns costuming and the appearance of a certain slippery creature in the film were direct references to Potter. The answer as it turns out is…definitely not!

It’s not, that’s the thing! Those were all in the book and you can correct me if I’m wrong, but getting me to wear yellow and red was in no way a Harry Potter reference. But it definitely has been read in to like that by some people, but I promise you, I’m not referencing my other work in other things. The snakes were awesome. I had a six foot long python wrapped around me for the last half of the film, which is the best prop any actor can ever have. And there’s no acting required when you’re wearing a snake!

Whether the Gryffindor­esque wardrobe and multitude of snakes were Potter references or not, it certainly seems like Radcliffe had a great time making this film and has so far enjoyed his very first Comic-Con experience. You can listen to the entire interview between Radcliffe, Aja, and Hill below, wherein they further discuss at length the dark themes of the film, their working relationships on set, and where Radcliffe offers a preview at his upcoming film Frankenstein and what he hopes to achieve in the coming years.

A number of stills and new posters for Horns were also released. You can view them in the gallery below: 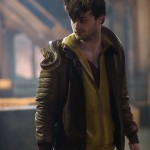 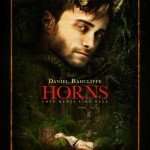 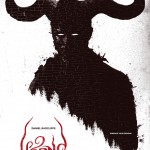 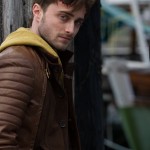 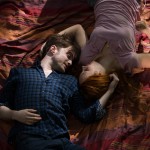 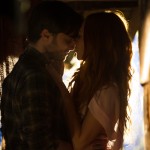 Catch up on the latest Horns and other Daniel Radcliffe news on Radcliffe’s MuggleNet Cast Page!

SD: The film is a fine balance between the darkness of Ig's new demonic persona and also his attempt to prove his innocence. From each of your three perspectives, having had a different hand in the film, how did you try to balance between those two, or how did you want to upset that balance?

JH: I think the story is less about a murder mystery, less of a whodunit, and more of a thought problem. What would it be like to know the worst in the people you love? To be faced with their worst - their worst secrets, their ugliest secrets, and temptations - what would that do to you? Could you hold on to your decency? Could you still love them? And in the course of the story, Ig suffers a lot from the things he learns about the people around him. He endures a lot of punishment. But I do think decency is resilient. Even though the film and the story take us to some pretty dark places, I do think there's a suggestion there that you can love people even when you know their worst, and maybe not in spite of, but because of. Because of their flaws. So I think that's sort of hopeful.

AA: Yeah, you were talking about the demonic new personality, but he is in fact not changing himself. He is physically transforming into the devil, but he's the only character that stays himself through the whole movie, and that's very interesting because it's the world around him that turns into hell, and not himself. And that's really about that trip through the fire that I think is really interesting for the character.

DR: I totally agree with everything that's been said. For me, there is always something more interesting about a part that is multifaceted and has a dark side, and it’s more true to life, even in this very heightened world that we’re in in the film. He’s a true anti­hero, and he is absolutely good, and you should root for him, and you should be with him all the way, but that’s not to say he doesn’t do some questionable things, but even he questions them. It’s not without consequence. And as he says, he learns from that so that he can be, in some sense, redeemed by the end.

JH: I just want to throw out there that one thing that you see in a lot of films today is movies and stories that really only take you to one place, that do just one thing. Horror movies that are just scary and action films that are only about buildings exploding. It's interesting to me that in the course of the novel Ig experiences a lot emotionally - grief, rage, despair, delight, madness - and the film took him to all those places and refused to stay in one box. And the other thing I'd say that's kind of amazing is that Ig covers this huge emotional landscape in the course of the book, and Dan went to all those places in the course of his performance and made it look easy. I always think whenever you see an artist do something difficult and make it look effortless, you're seeing the result of someone who's worked very, very hard - harder than the people around him. So I count us as very lucky that Dan decided he wanted to take on the part. It's a big reason why the film is successful.