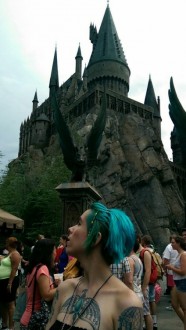 I was seven, and I read constantly. My nose was so oft[en] buried in a book, I’m sure that the entire school thought I lacked one. But I wouldn’t read Harry Potter. It was so popular that I refused. My grandmother unwittingly ended up dragging me to see the first movie [which she now openly regrets]. I felt so much with Harry that it hurt. He became a message to me, proof that you can grow up without parents and be bullied and misunderstood and still move on through all that to love and be loved.

Live kindly and truly as yourself.

The final notes of the score faded, and for a moment there was absolute silence. A silence built of confusion and realization and sorrow and stunned disbelief… this couldn’t really be the end, could it? Everyone stood around, many crying or holding onto each other desperately as if they needed someone to cling to their very core to prove that they were still living.

With a bang, a new song began as the credits started to roll, a fluid and somewhat emotional rhythm. There was a soft murmuring and a lot of nervous glancing as people searched strangers out, gauging their reactions and awaiting the first to start. It was not in unison but rather at various starting points that fans rose their wands with trembling hands and even shakier voices to cry out,  ”MISCHIEF MANAGED.”

It was disjointed and painful and so incredibly bursting with emotion yet completely unrehearsed. It couldn’t have been more perfect.

[Harry and I] would see the same thing. At least, at that age.