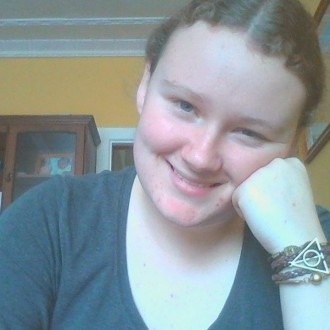 My parents first read me Harry Potter and the Philosopher’s Stone at the age of 3, I believe, and I was hooked! I started reading them myself at the age of 7 and never stopped. The reason I became a Harry Potter fan was the fact that the world JK Rowling created was a place I could be myself and no one else. (I’m going to try [to] explain the rest, but English is my third language. I’m Dutch) It’s a world so similar to ours but still so magical. I love the magical creatures, etc!

A cat, I think. I’m a big cat lover, and I know you don’t get to choose your Patronus, but I’m very similar to a cat when it comes to behavior. I’m just fine on my own and don’t need (a lot of ) people around me to feel just fine. But after reading Warrior Cats, I know a cat is more than an animal that’s always on [its] own.

Hard one! I would say everything but if I had to choose . . . probably the pair of glasses Richard Harris (RIP) wore in the first movie.