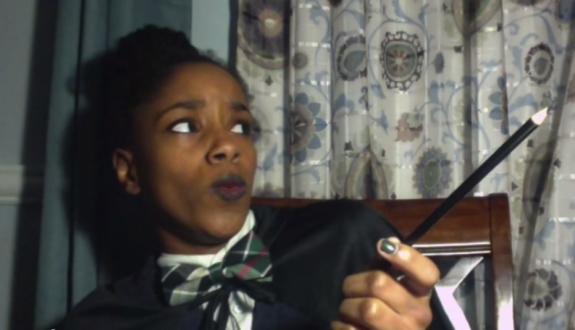 At 10, my mother told me about these curious books where a boy my age was repeatedly stuffed into tiny spaces like closets and cupboards but later starts receiving letters that somehow find their way into these tiny spaces, just like magic. Only once I finally started reading for myself, I realized that there’s so much more to the story. I’ve been hooked ever since, but I’ve always loved those humble beginnings.

I just knew that Harry and Ginny would get together, literally from book one. Of course, that one came true. But actually, I always sensed some chemistry between Hermione and Draco, but nothing ever came of it. Why can’t they be a couple…? Really?

I have two, even if that’s cheating. The first would be when I got the entire theatre at the Deathly Hallows [-] Part [1] premiere to chant . . .

The second would [be] when a few friends of mine answered 168 out of 200 Harry Potter character names on the trivia website, Sporcle, in just 20 minutes!