Five Things You Should Know About Katie Bell

In the next of our series of character facts, we’re turning our attention to another Gryffindor, Katie Bell.

Although we don’t learn much about Katie early on, she is a constant presence throughout the books and part of Harry’s much-loved Quidditch team from the beginning.

What is your favorite fact about Gryffindor Chaser Katie Bell? 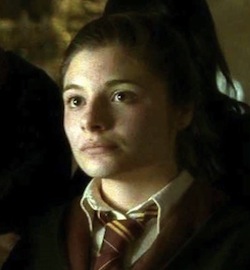 Here are five things we think you should know about Katie:

1. Katie Bell is one of three girls on the original Quidditch team that Harry joins – unlike the Slytherin team, which boasts no female players.

2. Katie is not particularly lucky when it comes to injuries – in Harry Potter and the Order of the Phoenix, for instance, Fred and George accidentally give her a Blood Blisterpod, ending that particular Quidditch practice to the Slytherin team’s delight.

3. Katie is one of the original members of Dumbledore’s Army and suggests the library as a meeting place. This idea is quickly vetoed by Harry, but she remains a keen member of the group.

4. Katie is one of the original Quidditch players left in Harry Potter and the Half-Blood Prince. When Harry tries to offer her back her Quidditch place without a trial, she says, “You mustn’t start off like that. For all you know, there’s someone much better than me out there. Good teams have been ruined before now because Captains just kept playing the old faces or letting in their friends…”

5. In Half-Blood Prince, Katie is accidentally cursed by Draco Malfoy when she touches the cursed necklace that he intends to deliver to Dumbledore. Katie is transferred to St. Mungo’s to recover for six months and is temporarily replaced by Dean Thomas on the Quidditch team.

We don’t know much about Katie’s character, despite the fact that she appears in every book. What do you wish we knew about Katie? What do you think Katie did after Hogwarts and the battle? Let us know what you think!