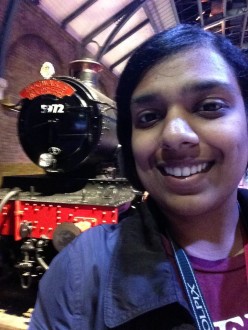 Originally I knew about Harry Potter in my home country of Denmark. I saw huge posters of Harry and the goblins in […] the first movie at our local cinema: I was so fascinated by it somehow, it looked very interesting, and most of all, the boy had glasses like me! Unfortunately, I didn’t get to watch the movie then, but two years later (at the age of 8), my best friend told me to watch this amazing movie, and it was none other than Harry Potter! After that, I really wanted to go Diagon Alley to get my wand!

I think mine would be a doe, not because it’s a main thing in Harry Potter but because people often say I have doe eyes, and my spirit animal is a doe, apparently!

What was your reaction to the news about Fantastic Beasts and Where to Find Them?

Actually, when I went to the Harry Potter Studio Tour the other day, I heard the guides of the tour say that they were filming nearby, and I was really excited when I heard! I think this movie will be awesome.