The landscape of fantasy literature looked very different in a world before Harry Potter (first published in 1997) or Game of Thrones (first published in 1996). As we’re all well aware, the genre took off like a bullet (or perhaps arrow is more appropriate here?) in the late 1990s and early 2000s, and today excellent fantasy novels abound in both the YA and adult book markets, luckily enough for us! But the fantasy genre existed long before that explosion, and novels were often heavily influenced by some of the culture’s most prevalent fantasy influences – Lord of the Rings and Dungeons & Dragons. The resulting stories were epic in scope, populated by elves, dwarves, orcs, giants, warlocks, and more, all wielding swords and bearing unfamiliar names. To a modern audience, some of these tales might seem overwrought and naive, but if you’ve got a taste for them, they never get old.

The Shannara book series is just one of those tales. I was gifted The Sword of Shannara by my brother, a child of the ’80s, when I was 10 or 11, and I devoured every Terry Brooks novel I could get my hands on after that. You can imagine my excitement when I learned that MTV was bringing The Shannara Chronicles to television in 2016, and I was even more excited to get the chance to review the first few episodes for MuggleNet! The television series is actually an adaptation of the second book in the series, The Elfstones of Shannara, and while some fans may be disappointed that we won’t get to see a live-action version of Sword of Shannara, the change is actually for very good reason – while The Sword of Shannara doesn’t have any female main characters, The Elfstones of Shannara has two. I, for one, really appreciate the studio’s foresight on that front and author Terry Brooks’s enthusiasm for making heroines a priority!

If you haven’t read The Elfstones of Shannara, here’s a short synopsis of what you can expect from the MTV series:

In Arborlon, the capital city of the elves, there stands a sacred tree: the Ellcrys. As long as the tree stands protected, elven society (and the rest of the world) is protected from the demons kept at bay by the tree’s magical properties. But if the tree dies and its leaves fall, evil will once again be able to enter the world. Each year, an elite group of warriors compete for the honor of becoming one of the Chosen, the group that guards the Ellcrys, and at the beginning of The Shannara Chronicles, Princess Amberle Elessedil (Poppy Drayton) has just broken tradition to become the only female Chosen in thousands of years. Soon after taking up her post, Amberle begins having visions of destruction sent to her by the Ellcrys, prompting her to leave Arborlon in fear – but her departure will not prevent the terrible events set in motion by the Ellcrys beginning to shed its leaves. Meanwhile, young half-elf Wil Ohmsford (Austin Butler) has recently come into possession of Elfstones his father claimed were magic and has set out on his own quest to find the druid Allanon (Manu Bennett), who promises to help Wil unlock his innate magical ability. Rounding out our cast of heroes is Eretria (Ivana Baquero), a bad-ass Rover girl with motives of her own. Soon enough, all their paths will cross as they work together to save the Ellcrys – and the world.

I really love the way MTV has interpreted Shannara so far – the scenes of Amberle running the Gauntlet are thrilling, the world (which is as much a future dystopia, with glimpses of a decaying Seattle and mouldering helicopters, as ethereal fantasy landscape) is beautifully rendered, and I am TOTALLY in love with the styling on the show – it’s very punk rock. Just check out this one ensemble of Amberle’s: 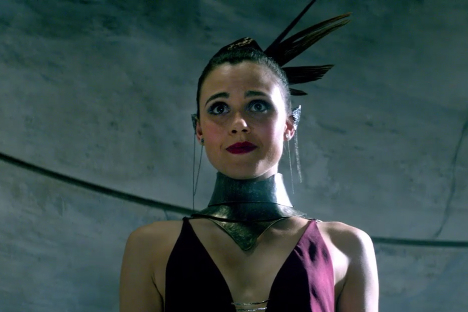 Guh. I die. Anyway! I’ll admit that I was a bit skeptical going into The Shannara Chronicles, not only because I was wondered if the source material would feel fresh in a modern fantasy landscape but also because TV doesn’t have the best track record of making good fantasy shows. Prior to Game of Thrones, essentially every television series I watched that incorporated fantasy elements disappointed me. I don’t know if it’s because the producers behind those shows didn’t get what was so – well – magic about magic or if reasonably-priced good CGI just wasn’t yet available, but the spark I found in fantasy novels was sorely lacking in fantasy television. But I needn’t have worried. The acting is good most of the time (Manu Bennett is an especial standout), and never cringe-worthy, and I felt myself swept into the story just as I was 15 years ago when I first read The Sword of Shannara.

If there’s one element that I think might turn viewers off, it’s how earnest Shannara is, the forces of good and evil colliding on an epic scale with unreserved righteousness, but that same feeling is present in the source material, and that makes it work. My recommendation: Level up your druid, don your best elven cloak, get ready to save the world, and tune in for some good ol’ swords and sorcery. I know I’ll be watching.

The Shannara Chronicles premieres TONIGHT on MTV at 10:00 p.m. – don’t miss out!