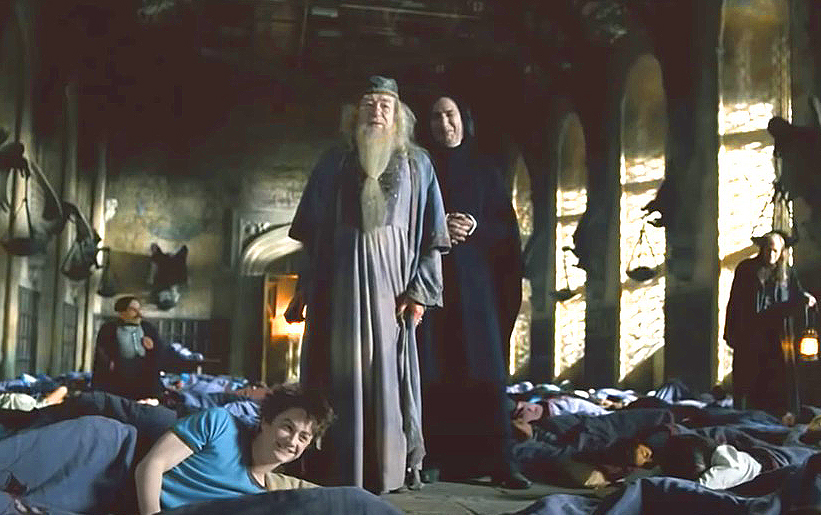 Dumbledore: “For in dreams we enter a world that is entirely our own. Except for Harry, of course – a lot of his dreams are Voldemort’s.”
—Collette

“Severus, I don’t want to interfere with your teaching methods, but we need to talk about you taking ‘infinite points from Gryffindor.'”
—Sam

What appears to be a smile is actually a grimace as Dumbledore steps on Harry’s hand.
—Friend of Fawkes

Sir Michael Gambon had thought his first day on the new Harry Potter would have more magic and fewer sleeping bags.
—Polly

Heartwarming: Headmaster and professor set up a plan to kill a teenage boy so the wizarding world can be saved.
—Nico

Of all the many oddities of Hogwarts School, Argus Filch’s habit of carrying around a lit lamp in broad daylight was perhaps the strangest…
—Grace

Snape: “Potter’s been laughing like that for hours. We can’t seem to get him to stop and go to sleep.”
Dumbledore: “How did it start?”
Snape: “Someone told him that Cursed Child is canon.”
—Sam

Snape: “Stop fooling around, Potter. This is for the yearbook.”
—Monica A.

When your friend’s parents know you’re not asleep at the sleepover, and you’re trying to pretend you are, but nobody’s buying it.
—Harrison

Director Alfonso Cuarón decided that the Great Hall tables were really messing with the feng shui of the room.
—Maddie

Snape: “Why do they all look like they’re from Beauxbatons?”
Albus: “It will all blow over in a few days…”
One week later…
Snape: “Now Fleur’s head is on their shirts!”
Albus: “Okay, now it’s a problem.”
—Hufflepuff Girl

Dan: “Can you put me next to the girl that I like in this scene?”
Alfonso: “Sure!”
Gambon: (in secret) “Shh, Alan! I put a fart machine in Dan’s sleeping bag. Hee hee!”
Five minutes later…
Girl next to Dan: (gets up and leaves, disgusted)
Dan: “Michael! Alan!”
Gambon: “It was just too perfect of an opportunity!”
—Katie G.

Flitwick: “Dementors everywhere around Hogwarts this year! Look, there’s even one above Mr. Filch!”
—Eric (Staff)