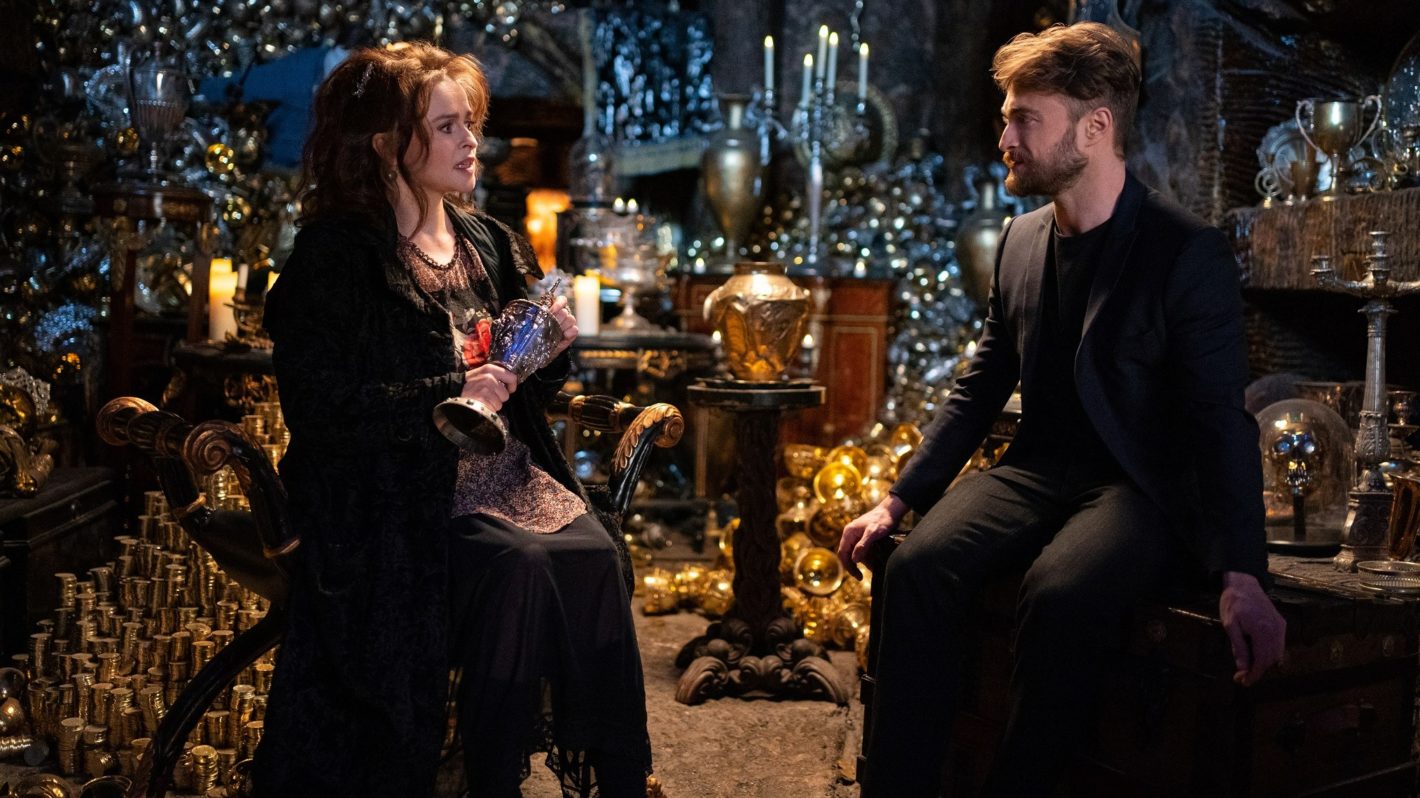 Dan: “Did you get that trophy for a performance?
Helena: “No, I got it for getting a Wordle right on the first guess.”
—Cass

Dan: “Helena! Would you believe that I’ve taken all my earnings from the Harry Potter franchise and bought all these beautiful, sparkling props?”
Helena: “And you do realize that the whole lot isn’t worth two bob?”
Dan: “????”
—Friend of Fawkes

Setting aside their weapons, Harry and Bellatrix decide that they will settle the Second Wizarding War with a simple game of rock, paper, scissors.
—Sam

Helena: “If I had a Galleon for every time you blew your lines, I’d have real money instead of this fake crap.”
Daniel: “I love it when you verbally chastise me. Do it again, please!”
—Friend of Fawkes

Bellatrix: (intoxicated) “So, you’re saying my daughter grew up wanting to destroy you and the wizarding world?”
Harry: “Yes, but—”
Bellatrix: (sniff) “She takes after her father.”
Harry: “Bella, she killed an innocent child.”
Bellatrix: “I’ve never been more proud!” (sobs)
—The Cursed Child

Harry: “So… when exactly were you pregnant with Delphi?”
—Sam

Bellatrix: “Oh my, it’s Harry Potter. So lovely to meet you again. Why the long face?”
Harry: “I don’t know…. Maybe it’s because you tried killing both me and my wife on numerous occasions.”
Bellatrix: “It’s been 20 years. Get over it.”
—Humble Hufflepuff

Helena: “Don’t look at me like it was my fault that Sirius died. I didn’t write the book.”
—Friend of Fawkes

Helena: “So what people don’t know is that right after I got cast, they told me not to wash my hair for a year, and that’s what gave me Bellatrix’s hair.”
—Emma

Bellatrix: “Well, if I can’t be with Voldemort, I guess I can at least be with a piece of his soul.”
Harry: “Wait, where is this going?”
Bellatrix: (turns on smooth jazz)
—Sam

How much McDonald’s has earned in the last century since the McDouble came out.
—Sylvia

Helena: “You see this goblet, Dan? Have you any idea how much firewhisky I had to fill it with to do our scenes in Order of the Phoenix?”
—Friend of Fawkes

Bellatrix: “It won’t stop replicating itself! No one wants a self-replicating cup, so I had to get a second vault just to keep the copies in check.”
Harry: “So you would have given us Hufflepuff’s cup if we had just found you and ASKED?”
—Troi