Over the years, J.K. Rowling has made several sweeping changes to the design of and information on her website, jkrowling.com. Her very first website was launched on March 4, 2000, and had a simple design. In 2004, Rowling’s website became interactive and geared toward Harry Potter fans. It was a way for her to connect with fans and release up-to-date information. Post-Potter, her website is more encompassing and includes her other works and information about her life.

Why couldn’t Newt just Apparate to the USA? Why did he go by boat?

Apparition becomes increasingly risky over long distances. As with most magic, much depends on the skill of the spell-caster: Apparition requires knowledge of the terrain to which one is moving, or the ability to visualise it clearly. Cross-continental Apparition would almost certainly result in severe injury or death.

Moreover, the beasts in Newt’s case had varying magical natures. Some could have Apparated with him, but others could not.

Why couldn’t Newt use Accio to retrieve all his beasts?

Accio only works on inanimate objects. While people or creatures may be indirectly moved by Accio-ing objects that they are wearing or holding, this carries all kinds of risks because of the likelihood of injury to the person or beast attached to an object travelling at close to the speed of light.

Why isn’t Veritaserum used in interrogations?

It is, but skilled wizards can avoid its effects by using antidotes and charms. A gifted Occlumens could also resist Veritaserum.

Why did [R]evelio undo the effects of Polyjuice Potion?

It didn’t. Grindelwald’s Transfiguration surpasses that of most wizards, so he used a spell, not a potion, to take on the appearance of Percival Graves.

Do you create as much detail beyond what we see in the Fantastic Beasts films as you did for the Harry Potter books?

Warner Bros had optioned the rights to the Fantastic Beasts years previously, so I knew that it might one day become a movie, but the only discussions we’d ever had about it were quite vague. I do remember thinking that if anything ever came of it, I’d have to make sure they got Newt Scamander right, because even though he never appeared except as a name within the Potter books, I knew a lot about him. He’d captured my imagination while I was writing his little book. I envisioned a doggedly different, awkward man who was at a loss with humans but phenomenally skilled with beasts.

As for Dumbledore and Grindelwald, I knew a huge amount more than ever appeared in the books, and this is my chance to show/tell some of it. Of course, in a film, one is revealing a story in a very different way than one does in a novel. Sometimes a single look does the job of three paragraphs. As readers of the original books will know, the pair of them don’t meet for a long time between their teenage interactions and their epoch-making confrontation in 1945. Nevertheless, we’ll be exploring their backstory in the films.

Why did Newt go in through No-Maj customs?

He was transporting magical creatures at a time when this was illegal. No-Majs were far easier to fool than the wizarding checkpoint would have been.

What kinds of ‘beasts’ are we dealing with here – human or animal?

The idea of beasts works on several different levels within the movies. There’s the literal sense of non-human creatures: some of them cute, some of them terrifying, some simply strange. Then there is the metaphorical sense of the beast inside a man, the crude emotions that a manipulative genius like Grindelwald knows how to stoke and use. We’re also dealing with the idea of beastly people: that some humans are something less than human. Even where there is great charisma and intelligence, there may be an utter lack of conscience. Finally, I’m exploring the idea of creating beasts, which is to say, othering or dehumanising our fellow people, as the first step towards cruelty or extermination.

So through this beastly landscape walk our original four characters, led by the shambling figure of Newt Scamander, who loves the purity of creatures that the world might call monsters. The human world around Newt and his friends is becoming darker and more complex, and the original hunt for escaped creatures will become a hunt for something much more elusive and difficult: a return to humanity.

Why wasn’t the Horcrux inside Harry destroyed when he was bitten by the Basilisk in Harry Potter and the Chamber of Secrets?

A Horcrux can only be destroyed if its container is damaged beyond repair. Harry was healed by Fawkes. Had he died, the Horcrux would indeed have been destroyed.

An Obscurus is developed under very specific conditions: trauma associated with the use of magic, internalized hatred of one’s own magic and a conscious attempt to suppress it.

The Dursleys were too frightened of magic ever to acknowledge its existence to Harry. While Vernon and Petunia had a confused hope that if they were nasty enough to Harry his strange abilities might somehow evaporate, they never taught him to be ashamed or afraid of magic. Even when he was scolded for ‘making things happen’, he didn’t make any attempt to suppress his true nature, nor did he ever imagine that he had the power to do so.

How about the Harry Potter encyclopedia?

I have been enjoying sharing information about Harry's world on Pottermore for free and don't have any firm plans to publish it in book form.

Will there ever be another Harry Potter novel?

I have always refused to say 'never' to this question because I think it would be foolish to rule out something I might want to do in a few years' time. However, I have no immediate plans to write another Harry Potter novel, and I do think that I have rounded off Harry's story in the seven published books. Since 2016, Rowling's website has returned to being more interactive, allowing fans to go through a timeline of significant events in Rowling's professional life and discover more about the wizarding world.

Rowling redesigned her website because she wanted it to be more real and personal. In her introduction letter, she stated that the home page is a faithful representation of her writing desk and the various objects scattered around literally do live in her writing space.

The website contains a lengthy list of frequently asked questions regarding Fantastic Beasts and Where to Find Them and a hidden "Rumours" page off the website's main page that can be found by clicking the crumpled-up piece of paper. It also includes links to some of the causes and charities Rowling supports, such as her charity, Lumos, and her charitable trust, Volant. J.K. Rowling's website during 2011–2016 featured a timeline of her achievements and basic information on her published works, upcoming events, and charities. 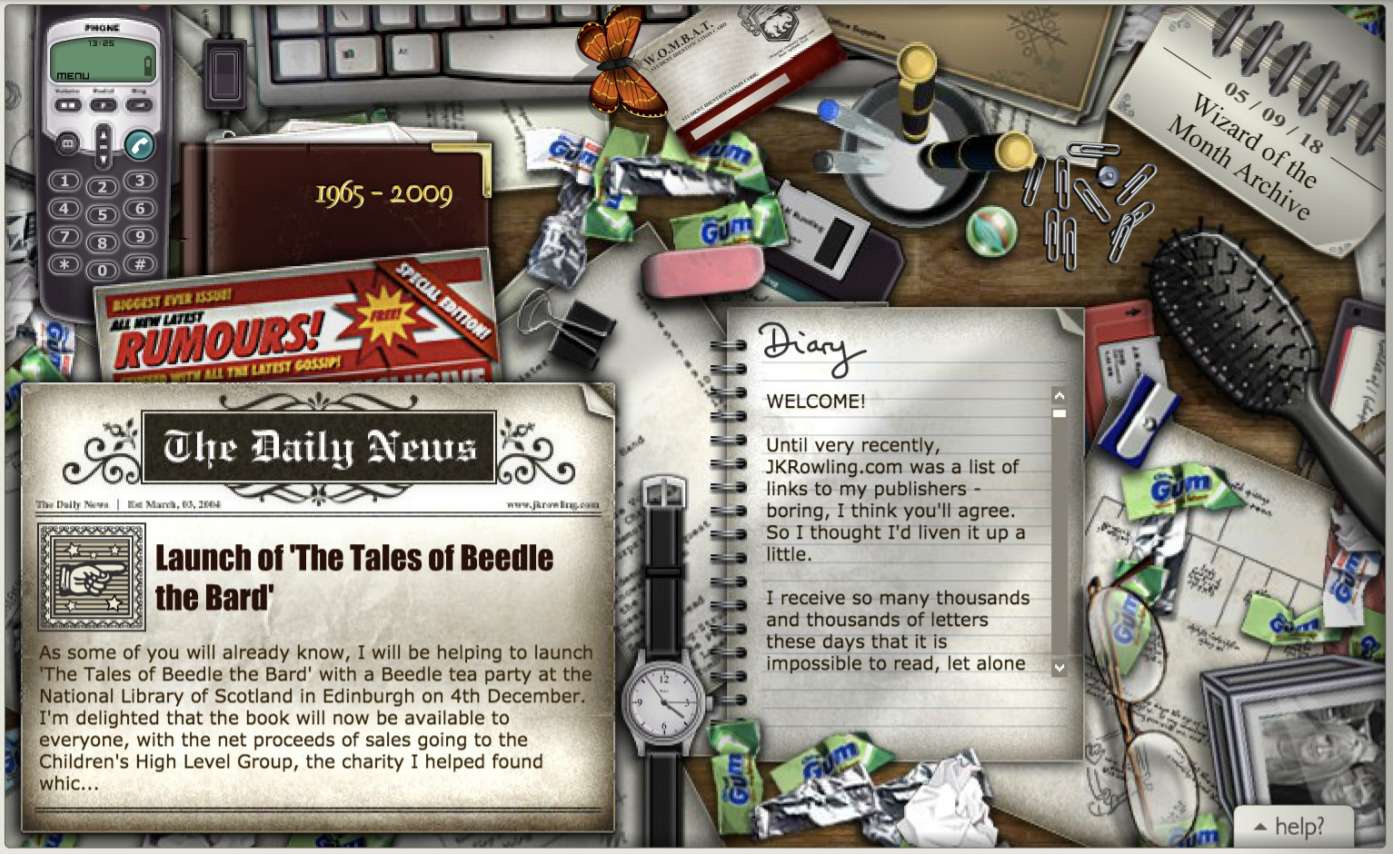 From 2004 to 2011, J.K. Rowling's website was interactive and geared toward Harry Potter fans. Some of the website's interactive features included finding and clicking on hidden objects to reveal bonus information and watching Peeves the Poltergeist cause chaos. Content included polls of frequently asked questions and diary entries about the author's day-to-day life.

The busiest time period was when the title of Book 6, Harry Potter and the Half-Blood Prince, was released. Over 1 billion visitors came to the site, which equals out to over 5 terabytes of data transferred to Harry Potter fans over the world.

The home page of the website featured a cluttered desktop. There were many intriguing items on the desk, such as a light switch that turned the desk light on and off and a cell phone with a blue answer button that would ring if the visitor stayed on the page long enough. There was also a "Mysterious Door" section with another light switch to turn on the light outside the mysterious room. In addition, an "Extra Stuff" section contained a radio to listen to some music while browsing the area.

The desktop also included a brown book that, when clicked, revealed a scrapbook. The scrapbook saved and displayed all the "Potternia" extras collected through finding the clues across the website, a total of 12.

The Room of Requirement was possibly the most-talked-about section of JKRowling.com, the purpose of which remained a mystery until it was unlocked for the first time in June 2004 to reveal the official title of Book 6 (with a little riddle at first, of course). Up until 2007, the door regularly opened with new information Jo wanted to surprise fans with. To pay the Room of Requirement a visit, visitors could click on the pink eraser located near the middle of the desk. Each time the "Do Not Disturb" sign was taken down, you could enter the room if you could figure out how to get in.

In August 2004, we received our first quote from the sixth book, which described the Minister of Magic, Rufus Scrimgeour. In October of the same year, three chapter titles were released. A few months later, it was announced that Half-Blood Prince was finally completed. The door opened in March 2006 to uncover the first-ever WOMBAT (Wizards' Ordinary Magic and Basic Aptitude Test), which was to be completed within 25 minutes. In September, the Grade 2 test was released. In December 2006, the title of the seventh book was released, and a year later, a never-before-seen family tree, including the Weasleys, Malfoys, and Lovegoods, was disclosed.