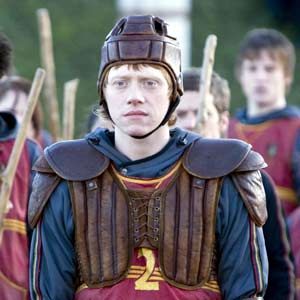 1999: I had just moved in from Iran to Malaysia. I was 9-years-old and still learning my “hi” from my “high”. My English was very wheezy to say the least, and to say I would like to eat an apple was already a feat. One day, my English teacher from Grade 5 brought in some books to sell in class for some reason. Among the pile of battered books was one with a peculiar cover. A boy flying on a broomstick through an arch, which had the engraving of “Harry Potter& the Sorcerer’s Stone” on it. YOU GOT IT! The American edition of the first book! Looking back at the cover now (which has sustained numerous stains, has scotch-tape bindings where it just couldn’t resist being flown around across the word, and a binding so bent from reading it more than 10 times that it’s just waiting to be flipped open again) I can say that for $5, this was a bargain!

But now back to the story. First evening back home after buying the Sorcerer’s Stone, I sat down to read a just few pages, because I knew I couldn’t keep up. I ended up reading more than 80 in total! And remember, I still couldn’t understand English well! All the Dumbledore, and Hagrid, and Hermione was all mumbo jumbo to me (Harry& Ron were easy though). Anyway, I never quite realised that Jo was talking about magic until Hagrid told Harry that he was a wizard. Didn’t get a hint from the flying motorcyle, nor the talking snake. Had no clue HAHA! Since then, I’ve been hooked! I have read each book at least 10 times, seen the movies, and collected as many chocolate frogs as I can ^^

It has been over three years since Deathly Hallows came out and we found out how the series ended. Do you have the same reaction to the ending now, as you did then?

Not really. Back then when the 7th book came out, I really wanted to know what the ending was going to be, who would survive, if Harry would die or not, if RON OR HERMIONE WOULD DIE (which would have been an even bigger blow, if Harry had to see it and live the rest of his life with it). Now I know everything and I’m just so excited to go see the movies! I know it’ll be sad when I see the last scene of Harry saying goodbye to Severus& James on Platform 9& 3/4, but then, I have 7 books to read over and over again. And movie marathons every year man!! I miss the first 2 films very much. Remember the theme song playing when Harry& Ron walk into Hogwarts? Those were the days, and the beautiful moments!

The Deathly Hallows split was announced last month. If you read the spoiler, what do you think? Where would YOU split the movie?

I would split the movie when they get captured by the Snatchers, just like where it was rumoured they would! It’s just a dramatic moment to have them all rounded up and shipped off to Malfoy Manor to be questioned/tortured. I dunno quite where in that scene they are going to split it(is it when Hermione is being tortured, or before Dobby arrives? Or after he is killed?I haven’t read the spoiler, and don’t want to)

Did you watch the Deathly Hallows trailer? If so, thoughts? If not, why not?

BEST TRAILER EVER!!! IT WAS EPIC, EMOTIONAL, AND GOD IT MADE ME WANNA SHOUT IN THE LIBRARY WHERE I WAS WATCHING IT! The first Deathly Hallow trailer was a giveaway and no mistake. The entire clip came from the second part, and there were hardly any scenes from the first. But this one…oh boy…THIS ONE…does the 1st movie justice. You start off with the eerie voice of Scrimgeour foreshadowing the dark times ahead, then flashes of Voldemort opening Dumbledore’s tomb, and most importantly, Harry, Hermione& Ron in INDIVIDUAL SHOTS, showing how separated they have become because of evil. The emotional scene of Harry& Hermione visiting James’ & Lily’s grave always made me cry when I would read it. And Dumbledore falling through the sky with a straight face is eerily still, yet meaningful for those who know the ending. No one who hasn’t read the book quite knows what the meaning of seeing Dumbledore’s eyes (or is it?) in broken shard of glass really means. Then the scene goes off to Snape talking to Voldemort, which he does in his cold Snape-like manner. Don’t miss out Umbridge standing next to the Ministry official in the Atrium!! There is a lot more to talk about, but two scenes that I really enjoyed are: Shacklebolt’s patronus appearing at the wedding. It was SCARY! Ron& Harry fighting. Man, I can’t wait!

Deathly Hallows: Part 1 is now less than two months away. How are you feeling, knowing that this movie marks the beginning of the end?

There is no end, only the beginning of something new. We are now part of a new generation of book lovers who share the same interests and know the same characters since we were small. We have grown up with Harry, Ron& Hermione, Dumbledore& Snape, Malfoy& Voldemort, and share something specially which we can cherish for the rest of our lives! Of course this is not the end. And as much as the movies and the books will be gone, Jo will continue writing. The actors will continue writing. I will continue writing and acting. The passion for performing that Harry Potter has instilled me will not die.

Are you doing anything fun: having a party, dressing up, etc., for the big premiere of Part 1?

Thanks for reminding me! I just emailed a few friends to see what they were up to!

I don’t know what the film-makers will do about the scene where Xenophilia Lovegood explains the Deathly Hallows, just because the Horcruxes have not been thoroughly explained in the 5th nor the 6th movie. People are just like: OK, either Harry or Voldemort should live because one has to finally kill off the other…but WHY? Why can’t they just leave each other alone? I hope that inner side of Harry wanting to do something for the sake of his friends will be shown in this movie, and partially explain why he is going out to look for the Horcruxes. I can’t wait for the comedy scenes! The 7 Potters, the wedding. But a few scenes that I am very emotionally invested in are the death of Dobby & Fred. I cried my eyes out when Dobby died, and was shocked to death when Fred was crushed! NO! IT CAN’T BE! NOT FRED!!

I have always had a crush on Emma Watson, and still have! I may not have met you, but from the interviews, you seem to be a very awesome and chill person! Good luck with your future career! Hope to see you some day 😉