Hidden away in west Hertfordshire, magic is happening. Over 10 years of Harry Potter film history is being unearthed and put on display where, next spring, it’ll form one of the UK’s most extraordinary attractions. I’m talking about none other than Warner Bros. Studio Tour London – The Making of Harry Potter at Leavesden Studios.

Imagine being able to step foot inside the Great Hall, to come face-to-face with a basilisk, to step inside THE Ford Anglia used in the films – that is just a small taste of what’s on offer to fans everywhere. The truly unique tour will let you venture behind-the-scenes and witness first-hand the craftsmanship and magic that has gone into making one of the most successful film franchises of all time.

A few weeks ago I was invited for a sneak peek behind the scenes of the Studio Tour to see how the development was coming along and to take a glance at some of the sets, creatures, special effects, and props that will be featured in the tour. Despite the fact that there is plenty of work still to be done ahead of the launch, I was given a clear vision of what they hoped to achieve.

Everything is being done with great care and respect to ensure an authentic representation of the Harry Potter films. Whilst some of the sets are still erected in their original format, many of the structures and props have been kept in storage where they have faced damage and decay. Drafted to repair and painstakingly restore the items are the team originally involved in creating them. Production designer Stuart Craig, make-up effects artist Nick Dudman, set director Stephanie McMillan, and a whole host of industry experts have returned to bring the world of Potter alive one final time.

The first thing to note is that this place is huge! Set in over 150,000 square feet, the tour will be housed in two studios (J and K – a coincidental homage to the wonderful author behind it all) as well as an exterior space for some of the outdoor sets and props. With great respect to the studio’s history, the old Rolls-Royce factory buildings will be preserved. It is this level of care and proficiency that is evident throughout the planning and development of the tour.

The attraction is estimated to take three hours, and the studios are expecting around 5,000 visitors a day. The pre-booked tickets will be allocated to time slots with around 120 people per session. A free shuttle bus will be on hand to transport visitors from Watford Junction to the heart of the studios.

As fans arrive at the visitor’s entrance they will be immediately presented with props protruding from the ceiling: I’m talking about either a Hawthorne dragon or a basilisk suspended from the roof! To the left will be a cafe (no butterbeer, I’m afraid!), and to the right will be a gift shop that will sell some unique merchandise only available at the tour.

The experience starts with eight digital screens playing footage from all of the films – building the hype and showing you the result of everything you are about to see henceforth. As the footage concludes you will be taken to a cinema where you will see some exclusive messages from the cast and crew reminiscing over their time on the set that many of them called home for the best part of a decade. From here, visitors will be taken to the most iconic and breathtaking of the sets that will feature in the tour, the Great Hall. Moved for the first time in 11 years, it has been meticulously rebuilt like a complex jigsaw so that you can witness the sheer scale and detail of the magnificent structure. Before entering the solid oak doors, you can marvel at the statues that surround the entrance hall, which are brought to life by McGonagall in the Battle of Hogwarts.

The Great Hall itself will be decked out prior to the Battle of Hogwarts and will be decorated with the house colors. What is evident here is the level of detail that goes into every single prop. The cutlery for the 1,000 extras was hand-dipped in gold, the tables were distressed before filming and then vandalized by extras (as encouraged by Stuart Craig), all of which added an extra level of authenticity. You will be able to walk on the same York Stone floor and take a seat at one of the house tables used in the films. For the first time, you will be able to witness the faint markings of the house emblems on the walls, things that aren’t clearly visible when you watch the movies. 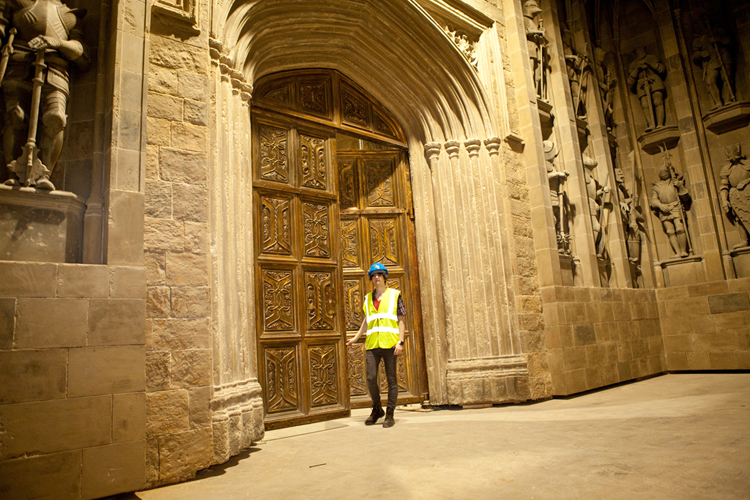 At the teachers’ table will be a showcase of the costumes of the Hogwarts staff including Dumbledore, McGonagall, and Snape. There will also be the house points vial, containing the very beads that left a national bead shortage when they were installed in 2000.

One of the film’s oldest sets, the Gryffindor common room will also appear in the tour and will be featured next to the boy’s dormitory. Visitors will only be able to walk partway into these sets – a decision that was rightly made to allow them to furnish the rooms full of props for you to admire. You will be able to see the original beds that were made for Harry, Ron, Seamus, Neville, and Dean, which they quickly outgrew during filming. On one of many screens detailing information about the sets, you will discover that filmmakers had to use camera angles to hide the fact that the teenagers could no longer fit in their beds. It is these insights that make the tour very personal and informative.

Some of the other sets that will be featured on the tour include Dumbledore’s office (with the griffin doorway, the Pensieve, and portraits), the Black Family tapestry, parts of the library, the Ministry of Magic (specifically the fireplaces, Umbridge’s office, and the infamous Magic is Might statue), Hagrid’s hut, the potion’s classroom, the cupboard under the stairs (which you can go inside), and the Weasley kitchen. 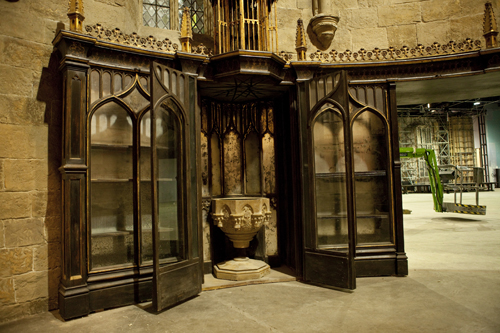 Outside there will be number 4 Privet Drive, the Riddle tomb, the Hogwarts bridge, and the chess pieces used in the Philosopher’s Stone. With some decisions still to be made, there may be additional props added outside with the chance of rotating the pieces throughout the year.

We were told on the tour that there are over 180 shipping containers worth of props and sets which are available for use on the tour. We can expect to see several display cases scattered around containing some of these items. In addition to these props, will be those hanging from ceilings and walls, including Hagrid’s motorbike, the Gringotts cart from Deathly Hallows – Part 2 and Quidditch brooms. Each will have green screens behind them with moving backgrounds to demonstrate the film technique.

Perhaps the biggest surprise of the tour is discovering that elements in the films you expect to be done by CGI were not. A perfect example of this is the beautiful door to the Chamber of Secrets complete with moving parts. You’ll be able to witness some of the special effects first-hand, as Lupin’s trunk folds away before your eyes and Moody’s trunk unlocks to reveal an imprisoned Mad-Eye at the bottom (using carefully placed mirrors). In the Weasley kitchen you’ll be able to use hand gestures to animate objects like saucepans and chopping knives and watch the magic unfurl before your very eyes.

Also present will be three of the 15 Ford Anglia’s that were used in the filming. One will be specially made to provide a photo opportunity with you inside of the car. It is worth mentioning that you will be able to take photographs throughout the tour.

Another huge part of the tour is the creatures and animatronics section. For those interested in filmmaking, you’ll get to see how prosthetics and models were used to create lifelike creatures. The sheer level of detail here took me back; we were told for instance that there were several versions of Fawkes the phoenix, each one had the feathers individually painted and attached. When we were there, art designers were working on Aragog (which is huge!), and they were individually adding each hair to the leg one by one. This level of intricacy is something you don’t always appreciate until you see it up close and personal.

In the creature workshop, visitors will be able to see the basilisk, Buckbeak, the Hog’s Head plaque, the Hungarian horntail, goblins, an eerily dead Charity Burbage, and the freakishly tall Aragog. 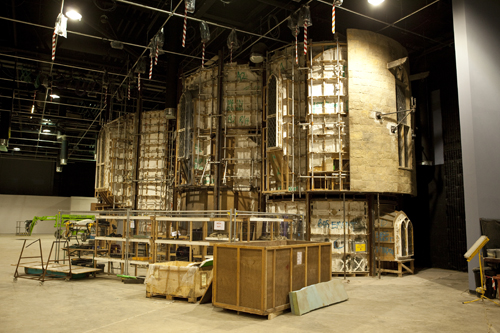 What I like most about the Studio Tour is the level of honesty and authenticity it bestows. Whilst breathtaking and overwhelming, the tour is in parts very raw. You will be able to see the scaffolding, plaster, and tape that holds the sets together. This gutsy decision was made so that you, the fan, will get to experience things exactly as the cast and crew did when they shot the films. Everything has been done with thought behind it – with Michael Finney telling us that even the lighting and time of day were part of the complex decision-making. The Warner Bros. Studio Tour London – The Making of Harry Potter is a celebration of the craftsmanship of filmmaking of Harry Potter and I highly recommend it!

Due to huge demand, tickets will only be available through pre-booking. They will not be sold on-site. You can buy tickets online at www.wbstudiotour.co.uk when they go on sale, on October 13th 2011, or from approved tour operators. Tickets will be priced at £28 for adults, £21 for children, and £83 for a family of four.