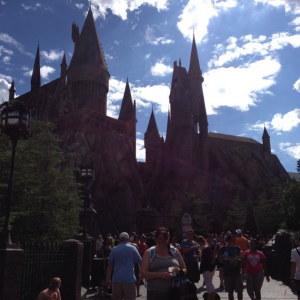 Originally, I was not a Harry Potter fan. I was a stubborn nine-year-old, and while all my friends read Harry Potter, I chose not to. My love for Harry Potter began with the first film. For my friend’s birthday, they chose to see the first movie in theatres. I went, albeit reluctantly. Needless to say that as the movie progressed I hung on to every scene, and fell in love with both the characters and the story. I bought all the available books the next day, and I have been hooked ever since.

I think if I were to look into the Mirror of Erised, I would probably see my future because knowing what will become of me in the future is my greatest desire. What would I look like? Will I have a career? A husband? Children, who are just as obsessed with Harry Potter as I am? I guess I am like Ron in that sense. He saw his future self as the Gryffindor Quidditch Captain and Head Boy, holding up the Quidditch Cup.

I would have to keep my memory of visiting The Wizarding World of Harry Potter for the very first time. Having been an avid Harry Potter fan for more than half of my life, the chance to go to WWoHP in October 2013 will forever be one of my favorite memories. I live in Newfoundland, Canada, so going to Harry Potter related events and places is a rarity. Being able to stroll through Hogsmeade, drink a real Butterbeer, take a glimpse inside Hogwarts castle, and eat an authentic chocolate frog was like being in heaven! I hope, that with the new renovations, that this will not be a one-time experience and that someday soon I will get to go back!

If I could have one prop, it would probably be the giant wizard chess set from the first film. I have always had a penchant for chess, and this was where Ron’s character was finally acknowledged as someone other than comic relief and where Hermione said one of my favorite quotes:
Hermione: “Harry, you’re a great wizard, you know.”
Harry: “I’m not as good as you.”
Hermione: “Me! Books! And cleverness! There are more important things – friendship and bravery . . .”