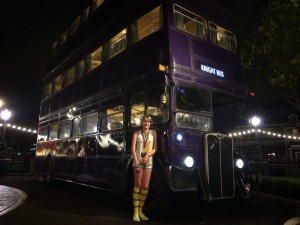 After somehow being exposed to it when I was about four years old, I was Harry Potter for Halloween. Then I had a Harry Potter party, being just immediately attracted to the magic of Harry Potter. I descended into full fan mode though when I read the first book in second grade and I still to this day remember what it was like to suddenly immerse myself in Rowling’s world. From then on, I was hooked and have never looked back.

So I finally got the chance to go to LeakyCon this year, so I’d say that would be the memory I would keep. That magical feeling, especially the night before the con started, over at universal, where you’re walking around in this real life version of the world that has become your home along with a bunch of people who feel the same way as you do (a nice muggle free evening) there in their robes and their Potter cosplays and it was just an absolutely incredible moment to be a Potterhead.

I found my home.

Oh my goodness I was so excited and jumped up and down for joy and then told everyone I knew, whether they cared or not 😀 It’s been a long time since we (the Potter fandom) has had something big to look forward to.