We previously showed you the UK teaser trailer and a number of posters for Daniel Radcliffe’s Horns. Now, Lionsgate has released the main UK poster and trailer for the upcoming film, and this trailer looks even more dark and intriguing than the last! 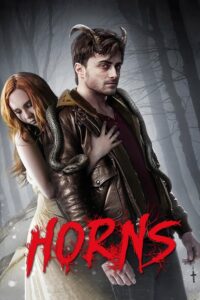 OFFICIAL PRESS RELEASE
Lionsgate is pleased to bring you the Main UK Trailer and Main UK Poster for Alexandre Aja's HORNS. Starring Daniel Radcliffe, Juno Temple and Max Minghella. Released into UK cinemas on Wednesday, 29 October, 2014.
Synopsis:
From master-of-horror Alexandre Aja (The Hills Have Eyes, Piranha 3D) comes this supernatural, offbeat thriller starring beloved British actor Danielle Radcliffe (Harry Potter, Kill Your Darlings) and the talented Juno Temple (Magic Magic, Sin City: A Dame to Kill For).
Ig Perrish (Daniel Radcliffe) is accused for the violent rape and killing of his girlfriend, Merrin Williams (Juno Temple). After a hard night of drinking, Ig awakens, hungover, to find horns growing out of his head; they have the ability to drive people to confess sins and give in to selfish impulses. Ig decides to use this effective tool to discover the circumstances of his girlfriend's death and to seek revenge by finding the true murderer.

Horns will be released on October 29 in the UK. It is based on the novel by Joe Hill. You can read MuggleNet’s review of the book here.

What do you think of the new trailer and poster? Are you excited to see Dan’s latest film? Let us know below or tweet your thoughts using #HornsMovie.