First Look at Emma Watson as Lena in “Colonia”!

It’s been just under a month since it was announced that Emma Watson would star in Colonia, a period political thriller, and we now have the first still of her in the film!

We’ve already seen a couple of pictures of her on set, but here’s the first image of her in action: 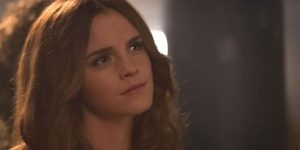 Emma, who plays Lena, a woman trying to locate her husband during a tumultuous political period in Chile in the 1970s, appears in the photo with co-star Mikael Nyqvist, who plays preacher Paul Schäfer, the leader of a cult Lena infiltrates to find her husband.

Filming for Colonia just wrapped in Luxemborg and is now moving on to Germany. Are you interested in seeing the film? We’ll be sure to keep you updated as we learn more about the film’s progress!

COLONIA tells the story of Lena and Daniel, a young couple, who become entangled in the Chilean military coup of 1973. Daniel is abducted by Pinochet’s secret police and Lena tracks him to a sealed off area in the South of the country, called Colonia Dignidad.  The Colonia presents itself as a charitable mission run by lay preacher Paul Schäfer but, in fact, is a place nobody ever escaped from. Lena decides to join the cult in order to find Daniel.

Having wrapped in Luxembourg, production now moves to Germany, before the shoot is completed in South America later this year.

The film is due for release in October 2015.