Five Things You Should Know About Lavender Brown

All the characters in J.K. Rowling’s wizarding world are richly developed and created. Over the years, Jo has developed the characters further, either in the books themselves or through other outlets, such as Pottermore.

We decided to put together some fun facts about some of the characters in Jo’s world. To kick things off, here are five fun things about Gryffindor Lavender Brown. 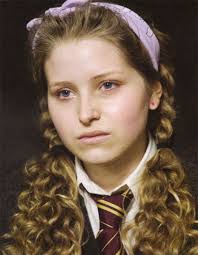 2. Lavender was the first character to be Sorted into Gryffindor in Harry Potter and the Sorcerer’s Stone, causing the Weasley twins to cheer loudly.

3. Little is known about Lavender’s parents and family, although it is believed that both of her parents are magical. One of Lavender’s parents writes to her in her third year at Hogwarts to tell her that her rabbit, Binky, has been killed by a fox.

4. Lavender went with Seamus Finnigan to the Yule Ball in Harry’s fourth year – although Harry hoped to get her to go with Ron, two years before the pair started seeing each other in Harry Potter and the Half-Blood Prince.

5. When put under the Imperius Curse by Professor Moody in Harry Potter and the Goblet of Fire, Lavender “imitated a squirrel.”