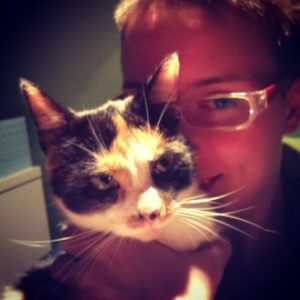 I received the first two books as a Christmas gift when I was still in grade school. I read the following ones as they were being released and translated in the years to follow. I became a real fan as an adult, when I read the original texts and saw how rich and wonderful they were. Both the English text and audio version have since become an irreplaceable source of comfort to me in times when my depressive disorder gets hard to handle.

I think my [P]atronus would be a cat. I have always loved them, and since I’ve had one, I feel as though a gap that there was in my life has finally been filled. Cats make me happy and calm, which, after all, are the emotions one requires in a [P]atronus.

The time I realized that there was something greater to glean from reading the books and from embracing the world they contain in general: when I read the section about colours on Pottermore, I realized how needlessly astringent some of the rules we set ourselves are and how much stress one can forgo by recognizing them and learning to ignore them. Dobby wears mismatched socks, and that would be seen as weird by most; why, though? How does it hurt you that his socks are mismatched? Would it matter to you if yours were? Why? And this can, obviously, be applied to other matters than socks.

OMG! J.K. Rowling is writing a new film series! I am so excited for…

I am very excited that the fictional world – the [w]izarding world – JKR has been so generously expanding in the recent years is getting more layered, more profound (hopefully), and in general, larger.