Five Things You Should Know About Percy Weasley

Ah, Percy Weasley. Prefect. Head Boy. The middle Weasley brother. Perhaps the least favorite Weasley? But he came right in the end and has a place in everyone’s hearts, so really, that’s all that matters. And everyone loves Percy, really. Right?

Plus, Percy provides us with some great comic moments – and is at the center of a rather wonderful family reunion toward the end of the series.

Love him or hate him, here are some things you should know about Percy – and some of our favorite Percy moments. 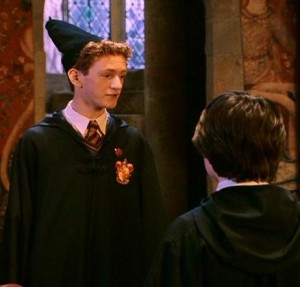 1. It is Percy’s old rat that Ron is given in Harry Potter and the Sorcerer’s Stone. Percy is given an owl by Mr. Weasley because he becomes a prefect. If Percy hadn’t been a prefect, then perhaps Ron would have never been given Scabbers… and what would have happened to Peter Pettigrew then?

2. In Harry Potter and the Prisoner of Azkaban, Percy is made Head Boy, which he is very smug about, and his Head Boy badge can be seen in the picture from the Daily Prophet that Ron sends Harry from Egypt. He is the second Head Boy in the family.

3. In Harry Potter and the Goblet of Fire, Percy spends a lot of time working and shouting at the others for being too noisy because he is working for the Ministry. He takes his job very seriously. At one point, he is working on a report on cauldron bottoms. We soon find out that Percy’s boss, Mr. Crouch, doesn’t even know his name – and calls him Weatherby instead.

4. In Harry Potter and the Order of the Phoenix, Harry learns that Percy has stormed out on his family and moved to London. We never find out where Percy is living or whom he’s living with. We do know, however, that Percy is ambitious and determined to climb up at the Ministry, hence his decision to leave his family, whom he thinks are traitors for supporting Dumbledore. Harry comes across Percy several times during his various trips to the Ministry, but Percy always ignores him.

5. Toward the end of Harry Potter and the Deathly Hallows, Percy returns to fight on Harry’s side, having realized his mistake. On his return, he walks straight into his family, who are all gathered in the Room of Requirement. He reconciles with his family just before they all get involved with the battle. Considering what happens next, this is a very touching and moving moment.

What do you find most interesting about Percy’s character? Do you have a favorite quote or fact? Let us know in the comments.