Five Things You Should Know About Professor Flitwick

For today’s post, we’re moving away from the students and young people of the Harry Potter world to consider one of everybody’s favorite teachers – the one and only Professor Flitwick. Professor Flitwick is Head of Ravenclaw House and Charms teacher at Hogwarts.

Read on to find out five interesting things about this professor. 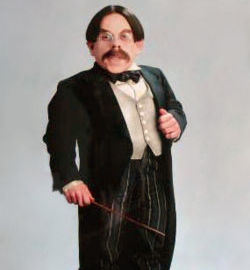 1. Like Minerva McGonagall, his colleague at Hogwarts, Professor Flitwick proved tricky for the Sorting Hat, and it dithered between Ravenclaw and Gryffindor. Ultimately, as we know, he ended up in Ravenclaw and later became Head of Ravenclaw House. Professor McGonagall went the opposite way, becoming head of Gryffindor House.

3. While Professor Flitwick has a lighter, easygoing side, he also has many talents. It is revealed in Harry Potter and the Chamber of Secrets that Professor Flitwick is a dueling champion. Unfortunately, we don’t get to see much of this, but it certainly proves useful in the Battle of Hogwarts! Professor Flitwick is one of the professors who stay to fight on Harry’s side and helps seal the castle with magical charms and protections.

4. In Harry Potter and the Prisoner of Azkaban, Flitwick spends time teaching the front doors of the castle to recognize a picture of Sirius Black to try and prevent another break-in by the escaped prisoner, who, at the time, they believe is dangerous.

5. Finally, on a lighter note, in the Three Broomsticks (Prisoner of Azkaban), Flitwick orders a cherry syrup and soda with ice and an umbrella, which sounds like a very sweet, but delicious drink!

There are many great things about Professor Flitwick that we wish we could have included, but we had to select only a few!

What’s your favorite thing about Professor Flitwick? What did we miss off this list? Let us know in the comments.