In this edition of Role Call, we get our first look at a suited Cormac McLaggen, Ralph Fiennes in SPECTRE, and find out what some of the former Harry Potter cast are up to. All that and more in our weekly Casting News series!

For all those Freddie Stroma (Cormac McLaggen) fans out there, get ready! His new series, UnREAL, premieres on Monday, June 1 on Lifetime. Freddie stars as a reality show suitor looking for love named Adam in this show based on the reality hit The Bachelor. Lifetime has been tweeting the last few weeks to build up to the premiere, and we finally found a great photo of Freddie as Adam! Take a look below and then view the trailer:

How would you make your first impression on Adam? Tell us using #PickMe! pic.twitter.com/aPjsovyiQO

The scripted series also has an interactive webpage where you can get to know the characters, tell the writers how you would make your own first impression on Adam, and gives video moments from the show to get you ready for the premiere. Check out a brief synopsis here:

Set against the backdrop of the hit dating competition show “Everlasting,” “UnREAL” is led by flawed heroine Rachel Goldberg (Appleby), a young producer whose sole job is to manipulate her relationships with, and among, the contestants to get the vital dramatic and outrageous footage that the program’s dispassionate executive producer, Quinn King (Zimmer), demands. What ensues is an eye-opening look at what happens in the outrageous world of unscripted television, where being a contestant can be vicious and being a producer a whole other reality.

Actress Isabella Laughland (Leann, HBP) is wrapping up her time on Sheffield’s stage as Elizabeth Bennet in a new production of Pride and Prejudice, which ends on June 6. She took the time to talk a little about her latest role, indicating that the multicultural cast is one of the most unique aspects of the play.

I think that’s very exciting. I don’t think it’s as much of an issue as it is on TV or film, theatre is much more real and open. The question is if it’s going to be this much of a big deal that there is a mix of mixed race actresses like me and black actresses.

As for her time with the cast from Harry Potter, Izzy had this to say:

It was absolutely extraordinary time that I will never ever forget. Going into the Great Hall and doing a read-through was insane. That was memorable. I kept one of the call sheets for a scene that was just Alan Rickman, Maggie Smith and me. It was just bizarre! I was more kind of in awe of meeting the main three actors, Daniel Radcliffe, Rupert Grint and Emma Watson. I had been growing up with them since I was little, seeing them in the films. They are the sweetest, loveliest human beings you could meet.

One of our favorite professors has a new role in Legend, a gangster tale based on real life events from the 1960’s. David Thewlis (Remus Lupin) will star alongside Tom Hardy, though the name of his character is not yet known. The film is set for a September 11 UK release and an October 2 release date in the US. You can view the teaser trailer here, although David Thewlis does not appear in the trailer as far as we can see.

Photos have finally surfaced of Ralph Fiennes (Lord Voldemort) filming for the upcoming James Bond flick SPECTRE. The Daily Mail posted grainy stills from the set, showing Ralph as “M” at what appears to be a crime scene. Take a look here! 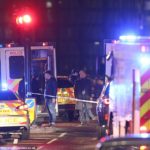 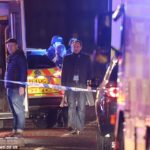 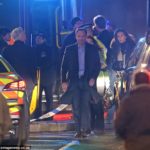 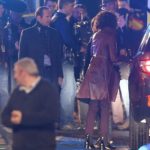 We previously reported that Sir Michael Gambon (Albus Dumbledore) would be taking on the role of Winston Churchill in Target Churchill, but appears that he will be playing the Prime Minister twice! A feature length film called Churchill’s Secret is set to begin filming this June in London and at Churchill’s family home. The film will be based on the book The Churchill Secret: KBO by Jonathan Smith and you can read a synopsis below:

The story will be told from the point of view of the Prime Minister’s young nurse Millie Appleyard, who cared for him after he suffered a life-threatening stroke.

A trailer and poster have been released for the Robert Redford and Emma Thompson (Sybil Trelawney) buddy comedy A Walk in the Woods. You can view the trailer here:

Domhnall Gleeson (Bill Weasley) has found his next role, starring opposite Tom Cruise in Mena, which tells the true story of a drug smuggler named Barry Seal after he was chosen by the CIA to lead a covert operation against communists in Central America during the Ronald Reagan era. Filming has begun in Georgia, however it is unknown at this time which role Domhnall is set to play. The film is scheduled for a January 2017 release. Domhnall is also currently filming The Revenant with Leonardo DiCaprio.

It was just announced that actress and director Fiona Shaw (Aunt Petunia Dursley) has joined the cast of The White King as Kathrin Fitz, which begins shooting in Budapest this summer. The film is an adaptation of the novel about a pre-teen dealing with the abduction and imprisonment of his father in a labor camp at the hands of the Romanian government. No release date has been given.

That wraps up this week in Casting News! Tell us which project or role you are excited to see by commenting below and don’t forget to tell us what you’d like to see the cast of Harry Potter take on next!