We all love the Harry Potter movies, but how long has it been since you last really watched them? Not at a party, not in the background, not with commercials. Really just sat down and enjoyed them? Have they changed for you since you first watched?

In general, save for the occasional Potter-themed party, I usually reserve watching the first movie for Harry Potter Weekend on ABC Family or during the holidays. So it has been a while since I’ve really watched it and enjoyed it as a movie. So here are 21 thoughts I had while re-watching Sorcerer’s Stone. Now, while I had MANY, many thoughts (namely some plot holes and missteps), we’ll focus on a few key ones for now.

1. Hagrid is just the best

Every single thing Hagrid does is just charming. When he laughs, cries, or says anything relating to his role in “Hogwarts business,” it takes me right back to the excitement of reading this book for the first time. As a viewer, Hagrid makes me feel welcome and safe, which is perfect given that the whole series is from Harry’s point of view. Remember that time he bent a gun barrel and gave one of the suckiest people in the series a pig tail in the same scene? 10 points to Hagrid.

Your kid sucks, so there. Source: The-ThreeBroomsticks

Know what? I’m just gonna call it out – this snake part is better than in the book. I said it. In the book, one of the tiny insignificant things that always felt like a big problem to me was the fact that the snake said “Thanks, amigo.” Why would he use “amigo”? We just established that he was bred in captivity. Where would he have learned Spanish in Lonson? And thinking retrospectively, knowing what we do now, how does a snake speak Spanish in Parseltongue? If we were standing next to this scene, would we just hear a bunch of hissing followed by “amigo”? Silliness. I love the change in the movie, just removing the “amigo.” Existential snake crises averted.

Some people have accused the score of this movie of “Mickey Mousing,” a film-scoring term meaning every action on screen is addressed by the music, making everything seem cartoon-ish. But I think that it makes this movie so magical. The cue as Harry and Hagrid enter Diagon Alley… truly magical.

If this doesn’t say magic…

This is arguably the most magical moment in this movie. Every other store is packed with, and surrounded by, witches and wizards shopping and talking and going about their days. But Ollivanders… it feels like a church. It’s quiet and reverent, showing us that things of great importance happen here. This is exactly how I imagined it in the book. And that shot when Ollivander considers Voldy’s brother-wand, and the music starts up again… beautiful moment.

Wait for it… boom.

Okay, this is a pretty big thing in this movie, the fact that people (and sometimes non-people) move all over the place when that’s totally not possible. Most of these occur inside Hogwarts, where only the longest of beard can Apparate. Let’s make a little list of weird movements.

And there are so many more. See what you can spot!

Instantly, though it’s a brief meeting, the Weasleys are amazing. The twins are hilarious, Ron perfectly awkward, Molly is incredible in the way she doesn’t care AT ALL about surrounding Muggles hearing her, and also, Ginny is there. “Yeah, just run right at that wall there. No, none of the Muggles will notice.” Source: Pinterest

7. McGonagall and the missing exposition

Okay, here’s a big part that really bugs me. So Dame Maggie Smith is incredible and exactly what I wanted for McG (I mean, drumming her fingers on the wall is the first shot of her. That’s so perfect!), but she is missing some key lines as she introduces the kids to Hogwarts. She tells them they’ll be sorted into Gryffindor, Hufflepuff, Ravenclaw, and Slytherin. Also, there’s a House cup, and you get/lose points for stuff. Then they just go on in. Wait, what? To an audience member who had never read Harry Potter, there is no definition of personality between the houses, which is one of the COOLEST parts of the HP world building. It would be fine if the Sorting Hat sang its song… but it drops the ball there, too. All we know is Weasleys are in Gryffindor, and Slytherin is bad. But Maggie is amazing, so… we’ll just relish in that. Also, is she wearing a bottle opener for a brooch? 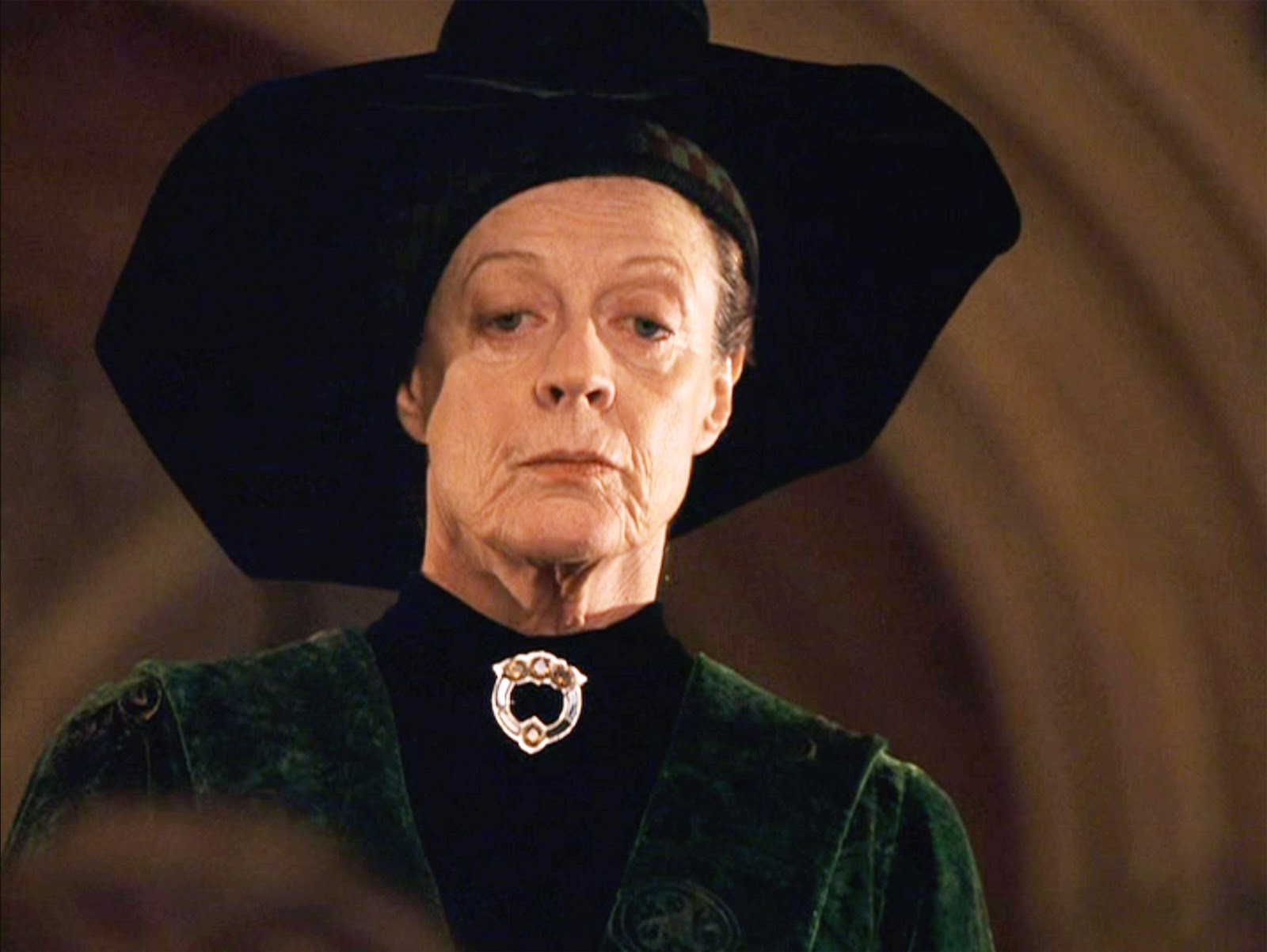 I mean, not that anyone can argue with that. Source: blogspot.com

8. The misplacement of the sass award.

Now we can all agree that Hermione has some great sass, and that comes naturally with her bossy know-it-all-ness. But really, I always felt that in the books, Harry deserved the official sass award. In the movie he has so few moments that bring out that side of him, and it was a defining feature of his in the books. Sassy Harry is sassy.

9. Harry and the meaningful looks

Now, what Harry is missing in sass in this movie, he makes up for in spades with the number of meaningful looks he shares with people, even when it’s… weird. When Harry is sorted into Gryffindor, he shares a meaningful look with Dumbledore… which is odd since they haven’t met. Then we’ve got a good one when Harry receives a Nimbus 2000 (“Hmm, what could this broom-shaped package be?”) with McGonagall. He also has a short one with Hedwig before she flies away for winter break. Meaningful looks with his parents in the Mirror of Erised count, too. Don’t forget the time he shares a meaningful look with himself in the same mirror. It’s weird when your reflection winks at you. Then a look with Ron and Hermione when he gets out of the hospital wing. Oh, and of course one with Hagrid when Gryffindor wins the House cup. And a final one with Hagrid as they leave on the train. So much meaning, so little time! 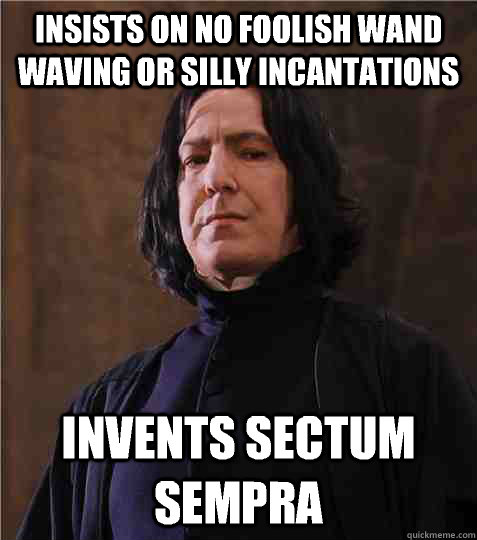 Seamus blowing stuff up is great, and I love it. Also, I’m tickled by the moment when he is in the Great Hall basically yelling, “Eye of rabbit, harp string hum, turn this water into rum,” and Harry says “What is Seamus trying to do to that glass of water?”

Such a true statement for the professors in this movie. We start with Madame Hooch, who can’t stop a kid on a broom from hurting himself. Seems like an obvious thing you’d need to be able to do for a flying instructor. Instead of using Arresto Momentum to stop his broom, she pulls out her wand and then dives out of the way, presumably to let the children behind her get skewered. Then we’ve got the whole troll in the dungeon debacle. And when the golden trio tries to get help protecting the Sorcerer’s Stone, none of the staff cares or does anything. *sigh*

The plus side? That’s hilarious. Source: wattpad

She may be tight-lipped and buttoned up, but when it comes to Quidditch, McGongall is the biggest fan short of painting her face Gryffindor colors. She gets so excited when Harry proves to be a potentially rad seeker, she has to pull Oliver Wood out of class immediately to tell him. Then she buys Harry the most expensive broom and rocks out during the game. I love it.

And if you look closely, you might see why she’s such a fan. Source: Stack Exchange

14. Every holiday is amazing

Just looking at all of the decorations, I get giddy thinking about what it would be like to be at Hogwarts during Halloween or Christmas. Well done, movie, I’m a child again. I will say, it did bug me a little that Harry didn’t get his other gifts in the movie, like Hagrid’s hand-carved flute, but it’s fine. YES TO THIS. Source: Rockenrollermom

Okay, so we have the whole deal with Norbert, and I understand that the movie didn’t have time to have the whole escape at the astronomy tower, but it left a huge problem. First announcement of the year: The [Dark] Forest is forbidden to all students. Then the golden trio is hanging out with a Hogwarts staff member, and are turned in by Draco. Punishment for being with a staff member at night? Forbidden Forest duty, with that staff member. At night. Also, negative 150 points from Gryffindor.

Just kidding. It’s obviously Quirrell, right from the beginning. Won’t shake the famous Harry Potter’s hand? That’s weird. Oh, is he there super obviously in the shot when Harry’s scar first hurts? Man, he really fell over in the stands when Hermione lit Snape’s robe on fire. I’m glad they zoomed in on him after so that we knew he was okay. Wow, Harry really caught something going on between Snape and Quirrell as he left the library. Then when Quirrell explains himself at the very end, we as an audience are all thinking “Yeah, we know already, let’s get moving.” Come on, movie, step it up.

17. Quirrell and the journey to the stone

Something I never thought of before, but definitely realized during this re-watch, is how awkward it must have been to be Quirrell with Voldy on the back of his head, going through these challenges. Was it like having a back-seat driver while he was flying around on that broom trying to catch the key? What about the chess game? “No, Quirrell, you imbecile, don’t move your Queen out that early!” Was he having an argument with Voldy right before Harry got there? It’s very possible that A Very Potter Musical has affected my original vision of Quirrell and Voldemort.

18. Remember that time Harry killed a guy with his bare hands?

Er… I guess one and a half guys? Source: Gifsoup

This movie has so many problems. It was written as pure fan-service, making sure to hit the big, exciting, memorable parts of the book so the fans would enjoy seeing everything come to life but completely neglecting the fact that it also has to be a movie with a story that makes sense. But you know what? I totally don’t care. This movie feels like freaking magic. The score is gorgeous, the castle is exactly what I wanted, the kids are really great actors, and it really does bring so many of the coolest parts of the wizarding world to life. This movie reminds me of why I love Harry Potter, and for that, it gets a free pass and 170 bonus points at the end of the year.

I love this movie like Dean loves Quidditch. Source: HuffPost

What are your thoughts when re-watching the first movie? Leave them in the comments below!