The West Coast is already getting hyped for when the Wizarding World experience at Universal Studios Hollywood opens in spring 2016, and even though the opening is months away, near-completed construction on Hollywood’s Hogwarts Castle means that promo materials are on their way! Universal has recently released the first signature art for Hollywood’s Wizarding World, and though it’s nothing we haven’t seen before, it’s still a thrill to see the words “Coming Spring 2016” at the bottom of the flyer. Check it out! 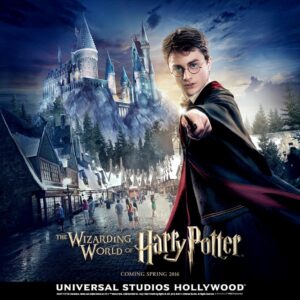 Are you excited about Universal Studios Hollywood?!

Universal City, California, September 18, 2015 – Universal Studios Hollywood wields a bit of magic with the reveal of newly created signature art for the eagerly-awaited arrival of “The Wizarding World of Harry Potter™,” scheduled to open in Spring 2016.

The new image, which depicts a wand-wielding Harry Potter in the foreground with a bustling snowcapped Hogsmeade village and a spectacular view of the iconic Hogwarts castle in the background, captures the spirit of this dynamic new immersive environment as the theme park readies for the West Coast’s debut of the “The Wizarding World of Harry Potter.”

About Warner Bros. Entertainment: Warner Bros. Entertainment is a global leader in all forms of entertainment and their related businesses across all current and emerging media and platforms. A Time Warner Company, the fully integrated, the broad-based studio is home to one of the most successful collections of brands in the world and stands at the forefront of every aspect of the entertainment industry from feature film, television, and home entertainment production and worldwide distribution to DVD, digital distribution, animation, comic books, video games and brand licensing, international cinemas and broadcasting.