Stupefied: How Long Until This Fantastic Beast Eats?

SATs may have wrapped up, but OWLs and NEWTs are a few months away. To keep you poor souls doing Arithmancy on your toes, we thought we would bring you this question that caused a minor “freak out” during the Scottish Qualification Authority’s higher math examination. As one observer, Logan Fraser from Alva Academy told BBC Scotland:

In my three years of sitting exams, I have never been approached by an exam paper so far beyond the difficulty level and question style of past papers, all of which I have studied from the year[s] 2000-2014. Further[more], the number of pupils leaving the exam hall in tears far surpassed any other – which in my opinion is dreadful.

So what exactly is the question? It involves a crocodile and a zebra – or a Kappa and a Muggle if that makes things easier (which we doubt). 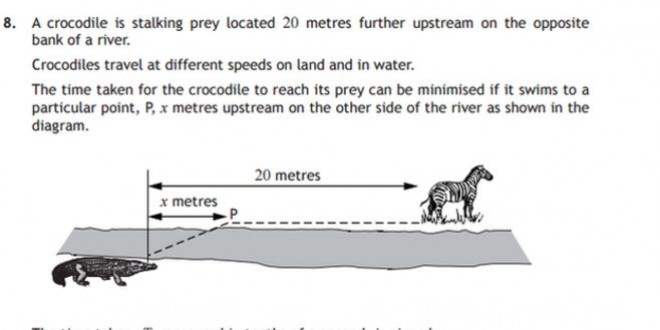 Was the outcry justified? Or are you on your way to securing an “Outstanding” grade? We’ve left the solution below, but be sure to give it your best shot. Who knows? You just might need to outrun a Kappa or Crocodile.

Solution
Want more posts like this one? MuggleNet is 99% volunteer-run, and we need your help. With your monthly pledge of $1, you can interact with creators, suggest ideas for future posts, and enter exclusive swag giveaways!
Support us on Patreon