Harry Melling Returns to the West End in “Hand to God”

Harry Melling (Dudley Dursley) is due to return to the West End this weekend (February 5) in a new comedy play, Hand to God. In a new interview, Harry has spoken about the challenges of the role – including learning how to use puppets – as well as leaving Potter behind.

Since graduating from the Potter films, Harry has focused primarily on the stage, writing and starring in his own play, Peddling, and now returns to the stage with the role of Jason, a

shy teenager […] who finds his puppet Tyrone seemingly possessed by the devil and leading his friends into sin.

You can see pictures of Harry with his co-star, Jemima Rooper (who also worked with Daniel Radcliffe on What If), and puppet, Tyrone, below. 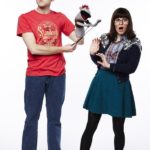 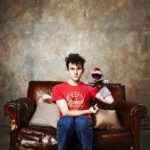 In the interview, Harry talks about the challenges that the role presented.

In terms of acting, this is like nothing I have done before. It’s a very different acting challenge that to be honest scared me senseless to begin with, as I had no idea how to do it. It’s been the biggest challenge of my acting career so far.

Harry is responsible for a hand puppet during the play, called Tyrone. He spoke about mastering puppetry and immersing himself in the role.

Every second I’m not in rehearsals I’ve been hanging out with Tyrone. He has sort of lived with me for the last month. It’s amazing how you begin to think like him, and you can isolate two parts of yourself and your thoughts. You are fundamentally talking to your hand, and you have to make that thing breath life; that’s been the challenge of the play.

Harry also touches on life after Potter and the impact it had.

I guess you have to start again after Harry Potter because it is such a huge franchise, so where do you go after that? What sort of actor do you want to become? One that goes from franchise to franchise trying to make as much money as possible? That’s not what I wanted. I wanted to ac,t and I have always loved the theatre.

Working with Richard (the late Richard Griffiths) and Fiona (Shaw) was amazing. The way they worked, and think, their wit, intellect and sense of fun are all things that hopefully through osmosis have gone into me somewhere.

I play this young National Geographic[-]type person who grows up during the film; he starts out quite pompous and changes.

The director and actors were great. Sienna Miller is lovely; Rob Pattison is lovely, and Charlie Hunman[…] they were all just such lovely people.

We’ll be looking out for it in the near future!

You can read the full interview here. Find out more about Hand to God here, including how you can get tickets.

Hand to God runs at the Vaudeville Theatre in London’s West End from February 5 until June 11.

Are you going to see Hand to God? Let us know in the comments!