We’re extremely excited here at MuggleNet today because the first look at Jim Kay’s upcoming illustrated Harry Potter and the Chamber of Secrets has been revealed. The first fully illustrated book in the series, Harry Potter and the Philosopher’s Stone/Sorcerer’s Stone, was released last October, and since then, we’ve been waiting to learn more about the next in the series.

Today, BuzzFeed revealed the cover for the upcoming Chamber of Secrets book, plus one further exclusive image from the book. As we’re sure you’re aware, the images for the first book were lavish and breathtaking, so we’re delighted to see that the images for the second book promise just as much. Below, you can see the full cover, which echoes the same style as the first one and shows the iconic moment that Fred, George, Harry, and Ron fly to the Burrow in the blue Ford Anglia. The UK cover differs very slightly from the US one, as you can see below: In addition to Buzzfeed’s reveal, Pottermore has also released two additional images – one of Hagrid and one spread detailing mandrakes. 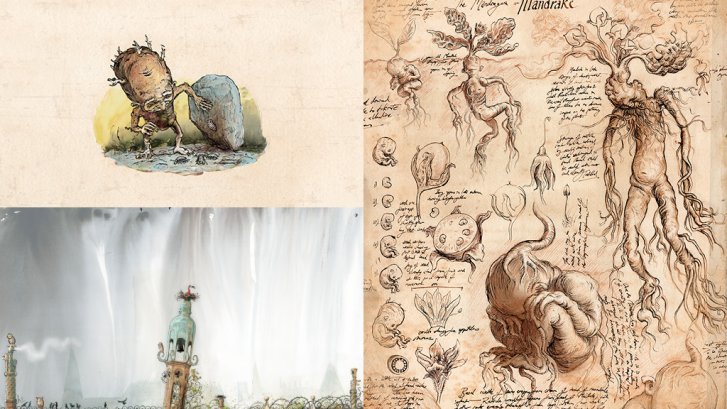 Mandrake illustrations from “Chamber of Secrets” 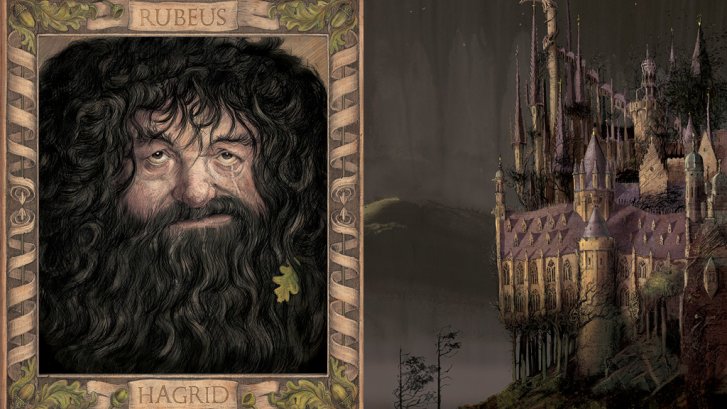 It was revealed at Harry Potter Book Night back in February that Jim had finished all the images for the book, so we’re sure we’ll see more before too long!

Chamber of Secrets will be released October 4, 2016.

What do you think of the new images? Do you want to see more or keep it a surprise for when the book comes out? What else do you hope to see illustrated in the book? Let us know in the comments!

New York, NY – March 30, 2016 – Scholastic (NASDAQ: SCHL), the global children’s publishing, education and media company, today for the first time released the cover image of the fully illustrated edition of J.K. Rowling’s bestselling Harry Potter and the Chamber of Secrets. Illustrated by award-winning artist, Jim Kay, the cover shows Harry Potter flying towards The Burrow in the Ford Anglia and is available for download at http://mediaroom.scholastic.com/harrypotter. Bloomsbury UK also revealed the image simultaneously.

The illustrated hardcover edition of Harry Potter and the Chamber of Secrets will be published globally on October 4, 2016 and will include over 115 color images. More than 450 million copies of the Harry Potter books have sold worldwide with over 160 million copies in the U.S. alone.

Harry Potter and the Sorcerer’s Stone Illustrated Edition was published globally in October 2015 and sent the Harry Potter series back to number one on The New York Times bestseller list. The book also appeared on both the USA Today and Wall Street Journal bestseller lists. There are currently more than 650,000 copies in print of the Harry Potter and the Sorcerer’s Stone Illustrated Edition in the U.S. Jim Kay’s artwork received acclaim across the globe and J.K. Rowling herself said, “Seeing Jim Kay’s illustrations moved me profoundly. I love his interpretation of Harry Potter’s world, and feel honoured and grateful that he has lent his talents to it.”

Pottermore, the digital heart of J.K. Rowling’s Wizarding World, will exclusively reveal extra artwork from Harry Potter and the Chamber of Secrets Illustrated Edition at 10:00 a.m. on Wednesday March 30, 2016. Head to www.pottermore.com to see more of Jim Kay’s beautiful images.

About Jim Kay
Jim Kay won the Kate Greenaway Medal in 2012 for his illustrations in A Monster Calls by Patrick Ness. He studied illustration at the University of Westminster, and worked in the Library & Archives of Tate Britain and the Royal Botanic Gardens at Kew. Jim has produced concept work for film and television, and contributed to the group exhibition Memory Palace at the V&A museum in London. He lives and works in Northamptonshire with his partner.

About Scholastic
Scholastic Corporation (NASDAQ: SCHL) is the world's largest publisher and distributor of children's books, a leading provider of print and digital instructional materials for pre-K to grade 12, and a producer of educational and entertaining children's media. The Company creates quality books and ebooks, print and technology-based learning materials and programs, classroom magazines and other products that, in combination, offer schools customized solutions to support children's learning both at school and at home. The Company also makes quality, affordable books available to all children through school-based book clubs and book fairs. With a 95 year history of service to schools and families, Scholastic continues to carry out its commitment to "Open a World of Possible" for all children. Learn more at www.scholastic.com.

Published globally on 4th October 2016 the hardback edition will include ribbon marker, head and tail bands, illustrated endpapers and over 115 colour images. The illustrated edition will be published in more than 21 languages around the world. All will be using Jim Kay’s artwork and will be joining the UK and the US in bringing this beautiful edition to life.

Harry Potter and the Philosopher’s Stone Illustrated Edition was published to huge acclaim in October 2015. Sales of the book exceeded 100,000 copies through UK TCM within the first six months of publication and the book has been shortlisted for The Bookseller Children’s Book of the Year. Jim Kay’s artwork received plaudits from across the globe and J.K. Rowling herself said, ‘Seeing Jim Kay’s illustrations moved me profoundly. I love his interpretation of Harry Potter’s world, and feel honoured and grateful that he has lent his talents to it.’