This week’s Casting News may be scarce, but haven’t you always wanted to see Robbie Coltrane host a crime show? Or Colin Farrell essentially embody Clint Eastwood? Read on because there are a lot of cool projects in store for our favorite Harry Potter alumni in this week’s Role Call!

Have you ever seen anyone as happy as Warwick Davis on the set of a Star Wars movie? Luckily, Warwick Davis (Griphook, Professor Flitwick) has joined the cast of Rogue One: A Star Wars Story just one week after it was confirmed that Darth Vader himself would be making an appearance in the upcoming film. Since his first Star Wars appearance in Return of the Jedi, Davis has gone on to star in smaller roles in The Phantom Menace and last year’s The Force Awakens.

Last week at Star Wars Celebration Europe, Warwick Davis appeared in costume in footage from the film. Rogue One: A Star Wars Story will be released in the United States on December 16, and we will be able to see Davis star in the franchise that first stole his heart in 1983. 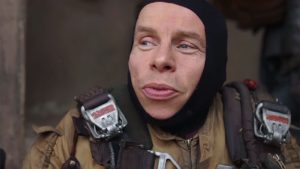 Warwick Davis in “Rogue One: A Star Wars Story”

A full list of Emmy nominations was released last week, showing Dame Maggie Smith (Minerva McGonagall) among the nominees for Best Supporting Actress in a Drama Series, for Downton Abbey. As you may very well know, Smith stars as the Dowager Countess of Grantham in the beloved PBS series. The final round of Academy voting opens on August 15.

This new project is especially interesting to Coltrane not only because he starred as a criminal psychologist in Cracker but also because his father was a police surgeon. Critical Evidence will be broken up into eight episodes in which Coltrane will walk viewers through how difficult cases are cracked. The show is set to debut later this year.

John Cleese (Nearly Headless Nick) surprised Chicago’s Center on Halsted last month with a colorful arrangement from Random Acts of Flowers, a non-profit organization that repurposes flowers and sends them to healthcare facilities in the Chicago area. In light of the recent tragedy in Orlando, Cleese gave support to this key agency serving the LGBT community.

I think [RAF] is an absolutely wonderful idea because it leads to those tiny little moments of kindness that make everybody feel that life’s worthwhile. I heard today that a member of Parliament [Jo Cox] in England was shot and killed in the streets. It’s never happened before in my lifetime so, in this time of crisis, when there’s so much mindless violence, aggression and hatred, these little acts of kindness begin to reverse the momentum.

John Cleese presented the flowers to the CEO, executive director, and board chairman of Chicago’s Center on Halsted. While he was there, he also signed a message of support to the families and friends of the Orlando shooting victims. 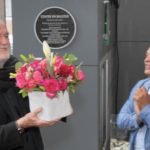 John Cleese and CEO of Chicago’s Centre on Halsted 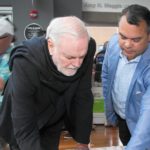 John Cleese and CEO of Chicago’s Center on Halsted

Gary Oldman‘s (Sirius Black) upcoming movie, Hunter Killer, in which he stars as a the Russian president, has just added two actors to the project – Michael Trucco and Ryan McPartlin. Trucco has starred in a variety of television shows, but you may recognize him from Killer Women or Fairly Legal. McPartlin is recognized for his work on NBC’s Chuck. Hunter Killer begins shooting this month, but the expected release date is currently unknown.

Colin Farrell, who will star as Graves in Fantastic Beasts and Where to Find Them later this year, is in talks to join the upcoming Clint Eastwood remake The Beguiled. If Farrell’s deal closes, he will take the role Eastwood played in the original film. Already set to star in the film is Nicole Kidman, Kirsten Dunst, and Elle Fanning. We’ll keep you updated on the project!

Evanna Lynch (Luna Lovegood) is set to attend the 46th Giffoni Film Festival on July 18 as a guest star. Alongside several other stars including Sabina Guzzanti, Evanna will speak about her career thus far. Evanna will be accompanying the film My Name is Emily, which she starred in last year. The festival has already begun, but it is not too late to catch Evanna Lynch!

We have been talking a lot about Domhnall Gleeson‘s (Bill Weasley) upcoming, highly anticipated (by me at least) film, Goodbye Christopher Robin. Well, I am pleased to inform you that the eight-week shoot begins in early September and will use locations including London and East Sussex, home to Ashdown Forest, the real-life Hundred Acre Wood near Milne’s home in Hartfield. We’ll keep you updated as the film progresses!

And that’s a wrap on this week’s Role Call! What do you think about a remake of The Beguiled? Let us know in the comments below!