Daniel Radcliffe Talks Shaving His Head for “Imperium” and the Reaction from the Ladies!

Daniel Radcliffe appeared on The View to discuss his new film, Imperium, his dark comedy Swiss Army Man and his jealousy over Eddie Redmayne’s costume in Fantastic Beasts and Where to Find Them!

He was greeted by an audience of screaming fans, as co-host Whoopi Goldberg observed that he is part of the fabric of their lives. Joy Behar also commented that Daniel is seen as a sex symbol, which he laughed off, in true DanRad fashion.

Turning to more serious topics, Dan addresses his new film Imperium, which centers on an FBI agent who infiltrates a white supremacist group. The film is timely, considering race relations in the media as of late, and Dan explained what he learned from working on the movie, saying,

I think the main thing that I sort of took away from the film is that as difficult as it is to not just be, ’cause you know, your reaction to somebody like that, and to white supremacists and that sort of thinking is just sort of disgust and anger, obviously, and revulsion, but the thing that I sort of suppose I took away from it is that the more you act that way towards them, the more it plays into their world view that the whole world is just a conspiracy against them … I am firmly of the belief that nobody comes out of the womb thinking like this, you have to learn this way of thinking. I did come away with a semblance of hope, that if this film can be a tiny, tiny part of a dialogue that needs to start, then that would be, obviously, that’s reason enough for doing the film.

He also revealed that he actually did shave his own head for the film, and it was his idea! He completed the task while on camera after deciding that while there were many creative ways the director could show this on film without actually shaving his head, he thought it would be fun and he enjoyed having his hair so short. Dan told the hosts of The View that having his head shaved actually made things easier, with the added benefit of garnering some attention from the opposite sex.

It’s comfortable and it also makes women touch your head all the time … although I shouldn’t put that invite out there on television!

Stills and a clip from the film were also released last week, which you can see below: 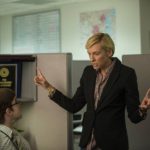 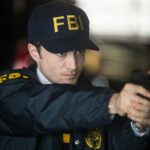 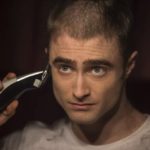 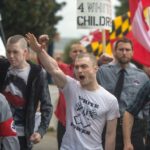 Talking about Fantastic Beasts, Dan jokingly expressed that he felt a tad bit let down by the Potter costume department when he saw the wonderful costume Eddie Redmayne gets to wear for the upcoming first film in the new trilogy, due out in November:

I’ve said this to Jany [Temime], our costume designer as well, who was from Potter, that I spent ten years in jeans and a zip top, and he strolls in, and just … but it’s like, which one would you rather wear out of those two? It’s set in a different time, but I felt slightly short-changed when I saw the photos, I was like, “Come on!”

Whoopi then exclaimed, with which many Potter fans might agree, that Dan is the original Harry Potter and there will never be another. Good call, Whoopi!

You can watch the full interview with Dan below and don’t forget to check out Imperium, which will be in theaters and available On Demand on August 19!